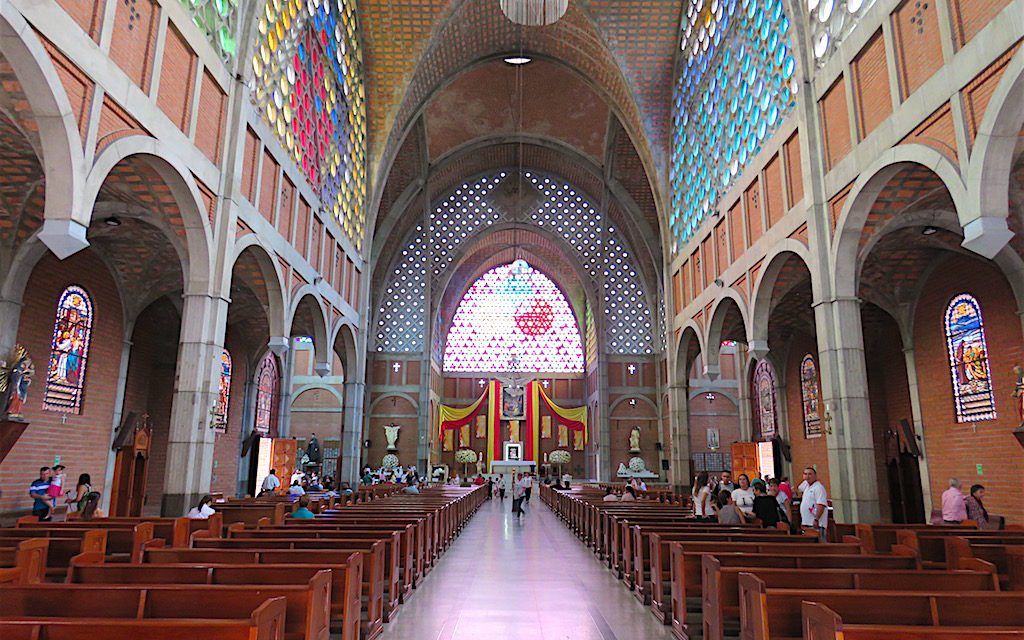 Iglesia San Joaquín is a notable and historic Roman Catholic church located in the San Joaquín barrio of the Laureles-Estadio comuna in Medellín, which is worth seeing if you like historic churches.

This Roman Catholic church, also known as Parroquia de San Joaquín, is reportedly the second largest church in Medellín. And this Byzantine-style church is full of many beautiful stained-glass windows and pieces of religious artwork. This church is quite impressive to see.

A reader of the Medellin Guru website recommended this church to me. And when I visited this church my impression is that it’s definitely one of the most beautiful churches I have seen in Medellín.

The above photo is the central nave inside Iglesia San Joaquín.

In addition, we included Iglesia San Joaquín in our list of the top 14 churches in Medellín and the Aburrá Valley. 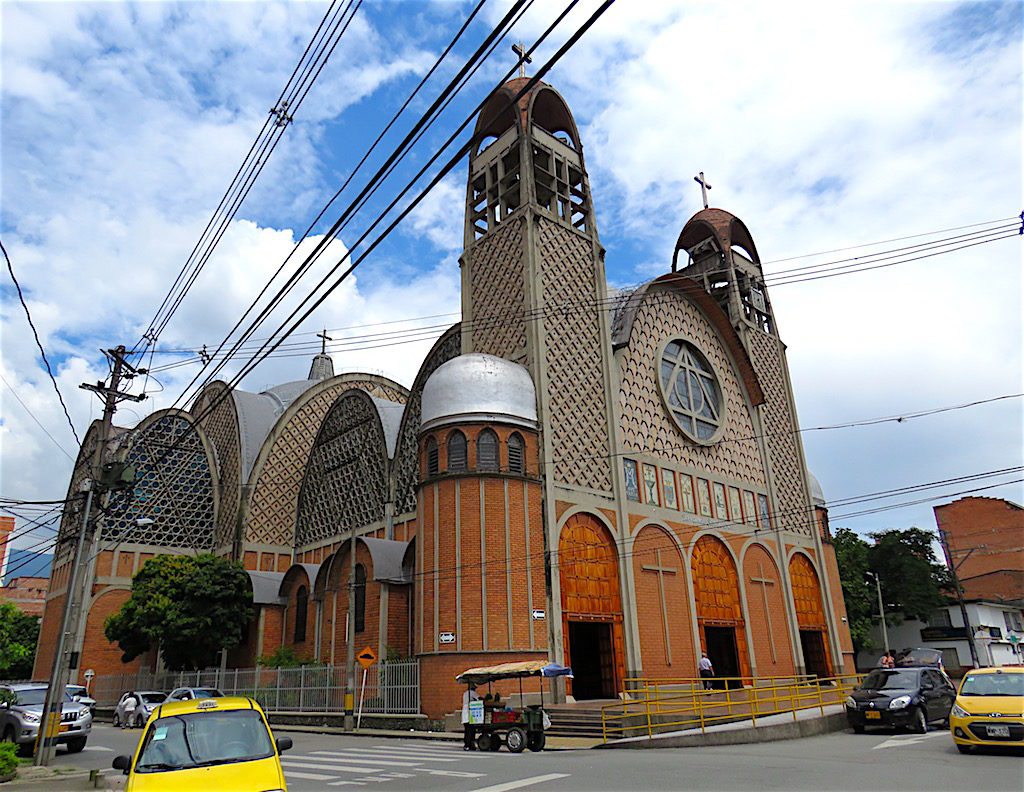 Over the last seven months the Medellin Guru website has been covering the most beautiful churches in Medellín and the Aburrá Valley in a series on this site.

We looked at a total of 33 churches in this series. And this is the most comprehensive look at Medellín’s churches by any English-language website that I am aware of.

In conducting research of churches, I visited over 75 churches in Medellín and the Aburrá Valley and took over 1,200 photos. The reason for doing this series is that unfortunately the travel guidebooks in English about Colombia and Medellín are missing most of the beautiful churches in the Medellín metro area.

Iglesia San Joaquín may be the last church covered in this series. While there are several additional beautiful churches in Medellín and the Aburrá Valley, I feel we have covered the most beautiful and most important churches in this series. But if another notable church worth covering is found, we’ll add it.

Our church series has been very popular with readers with a total of over 85,000 page views and over 17,000 shares of all the church articles in the series. 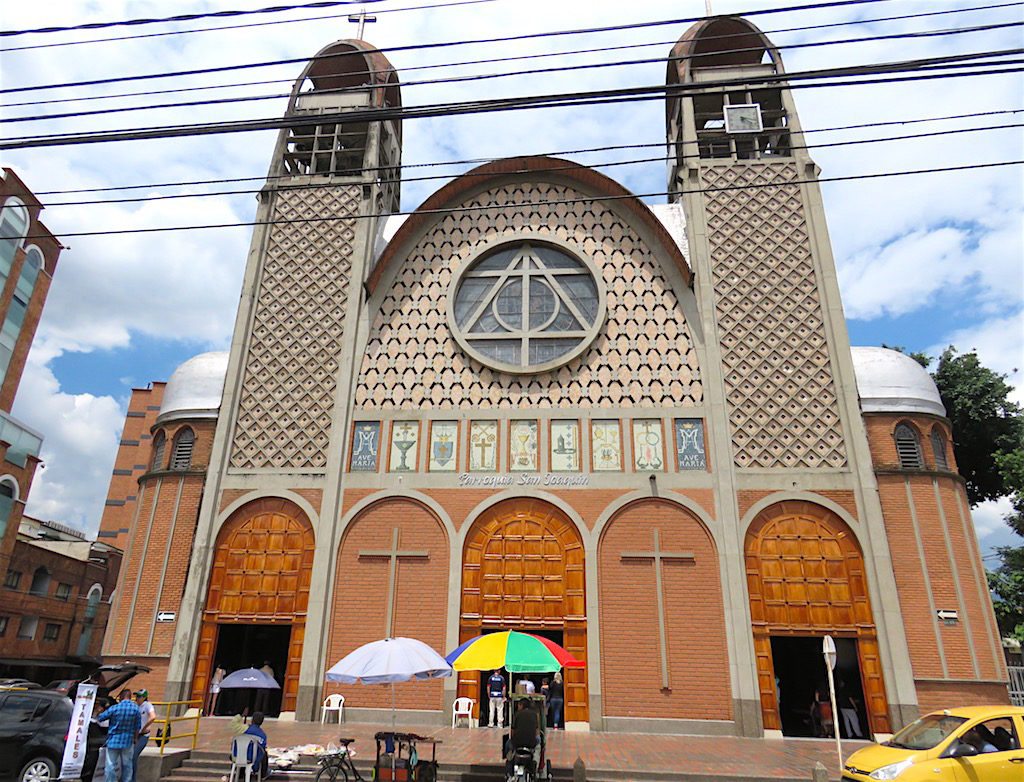 The façade of Iglesia San Joaquín

Iglesia San Joaquín (also known as Parroquia de San Joaquín) is located in the San Joaquín barrio of the Laureles-Estadio comuna in Medellín.

This barrio is adjacent to the Universidad Pontificia Bolivariana (UPB) university campus west of the Medellín river.

Also, this barrio used to be named Los Libertadores that was started by the now non-existent Instituto de Crédito Territorial (ICT). In 1953, the first houses in the Los Libertadores neighborhood were built.

Residents in this neighborhood reportedly used to go to church at the UPB campus nearby. But parish priest Jorge González wanted to build a church for the Los Libertadores neighborhood. 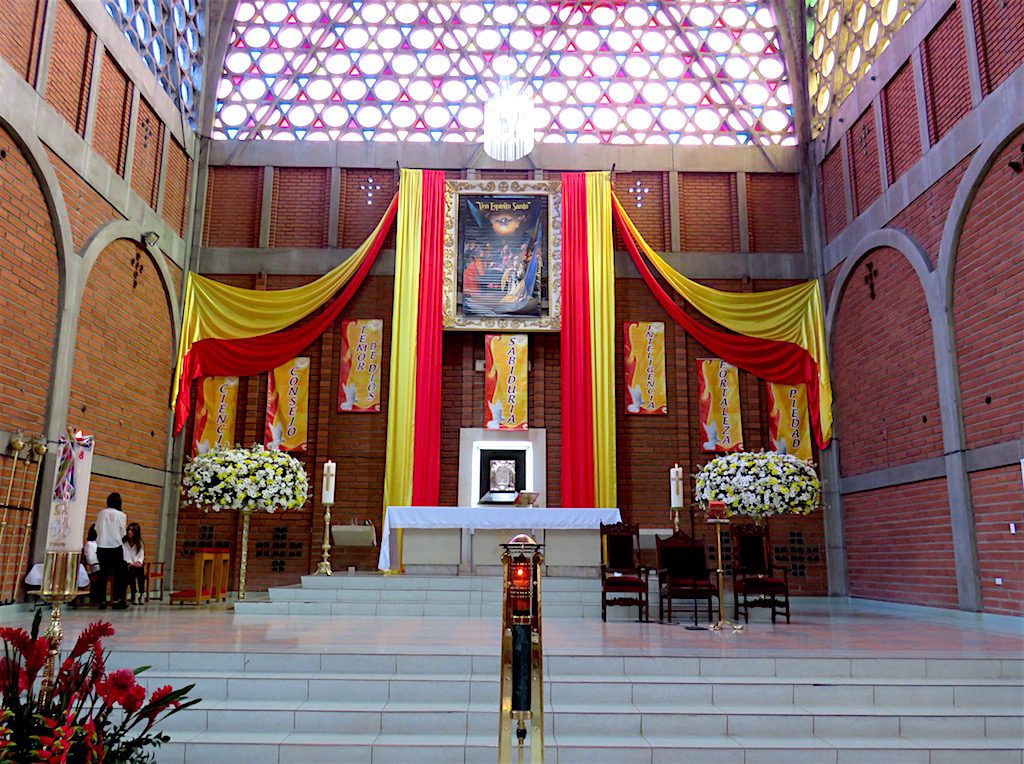 Iglesia San Joaquín has a many beautiful stained-glass windows that were designed in Colombia. 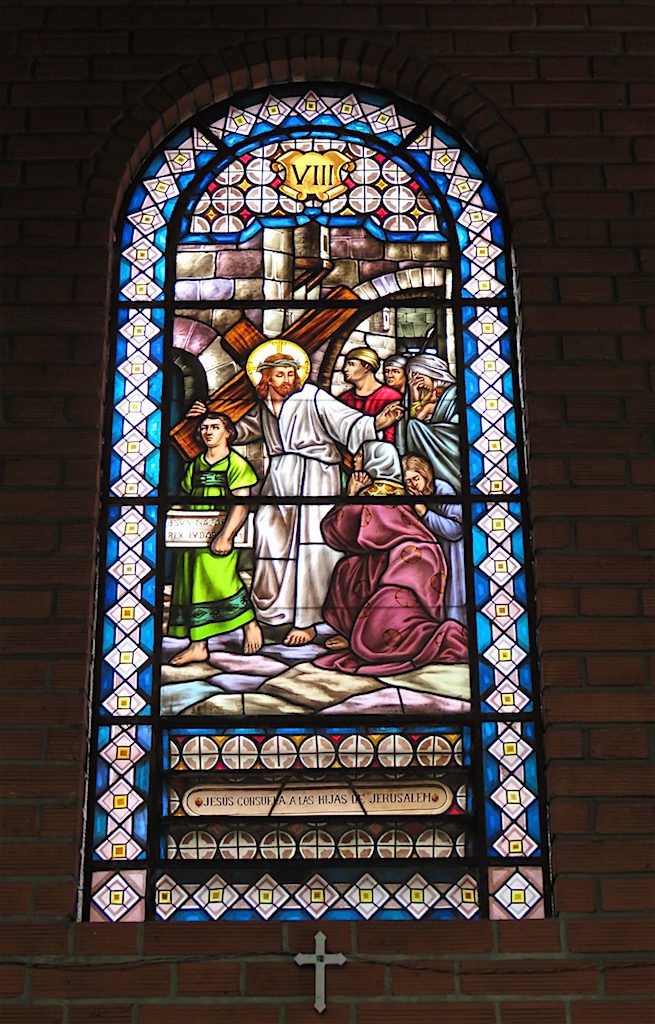 One of the beautiful stained-glass windows in Iglesia San Joaquín

Another of the stained-glass windows in the church 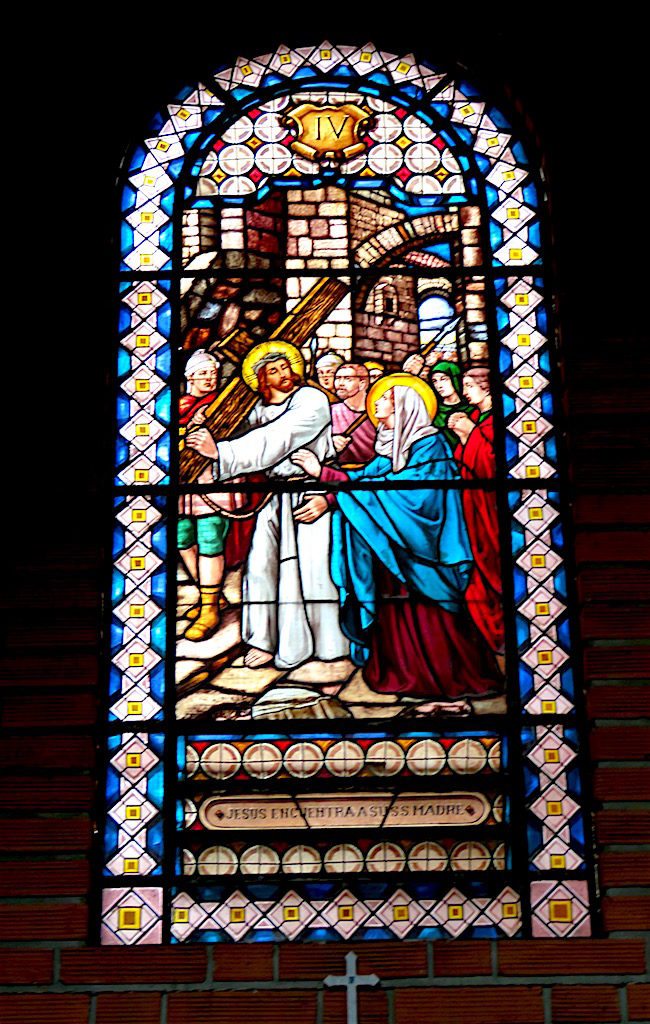 Also, there are many pieces of religious artwork to be found throughout this church. 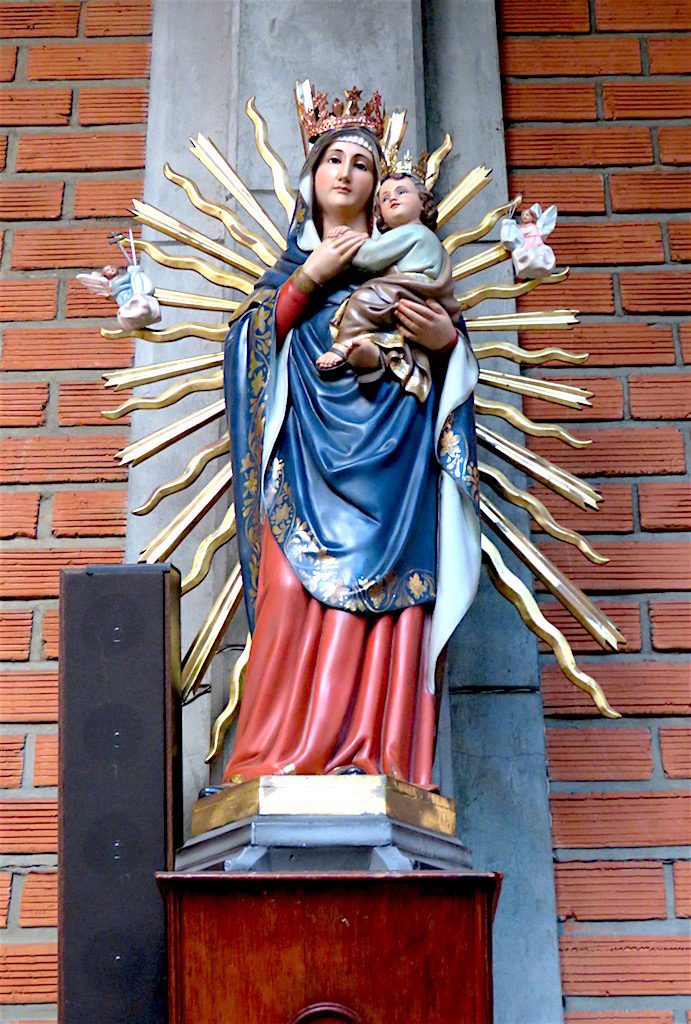 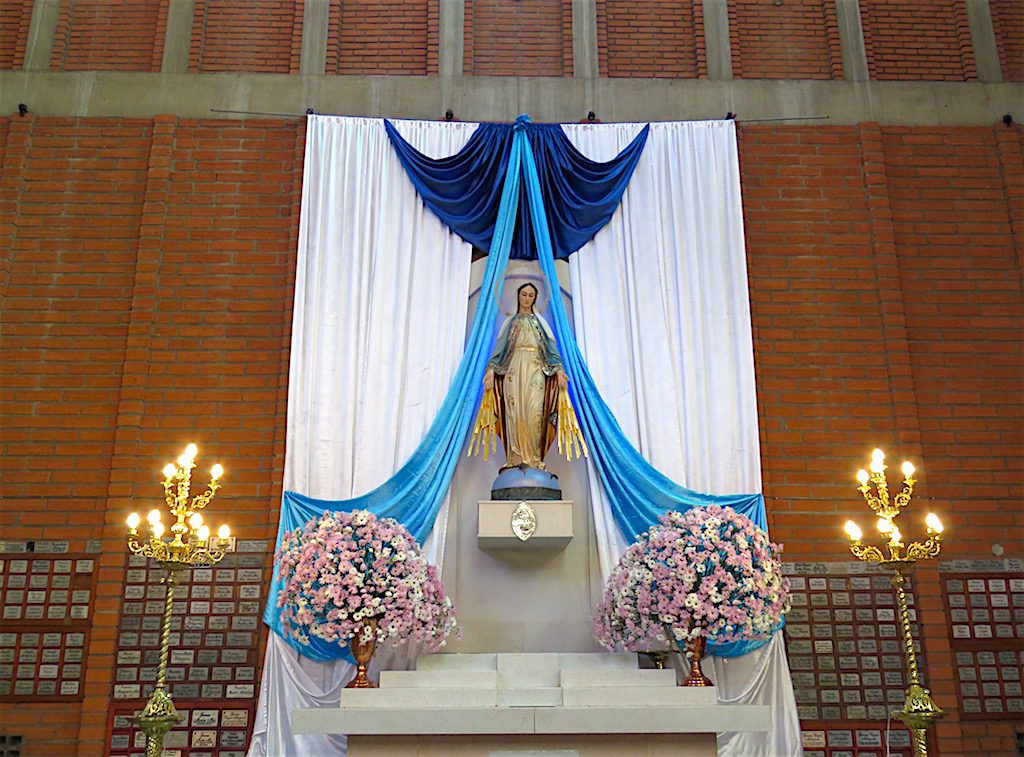 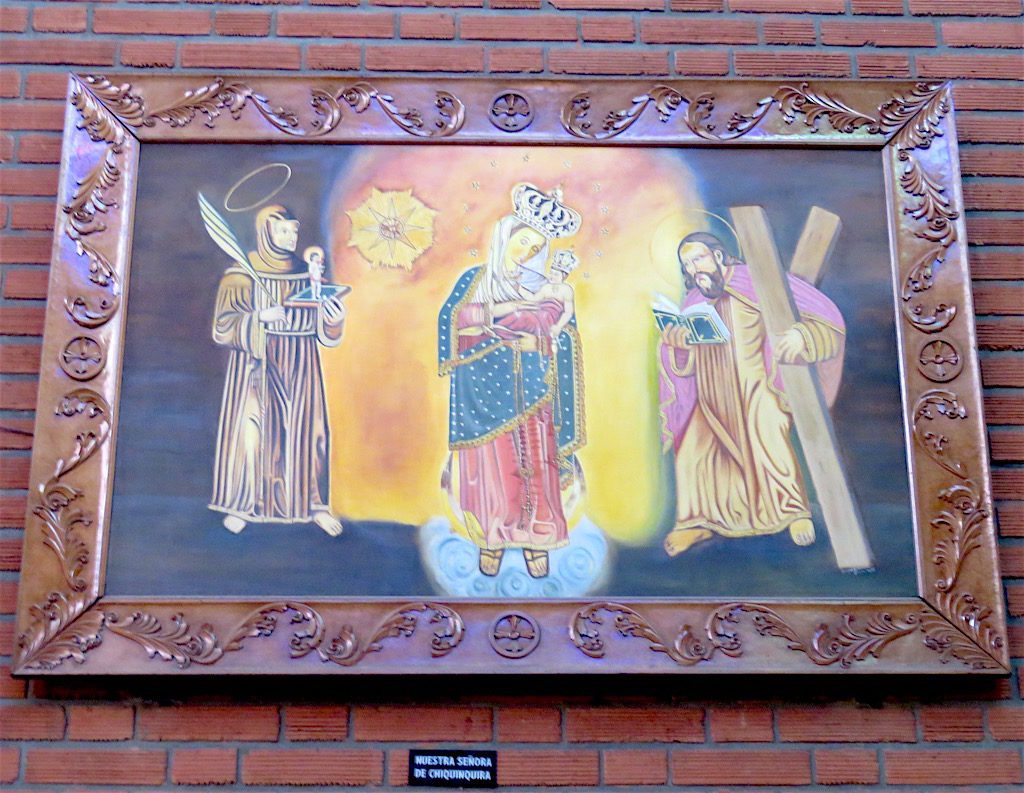 The church also has an organ that is reportedly the second largest organ in Colombia. 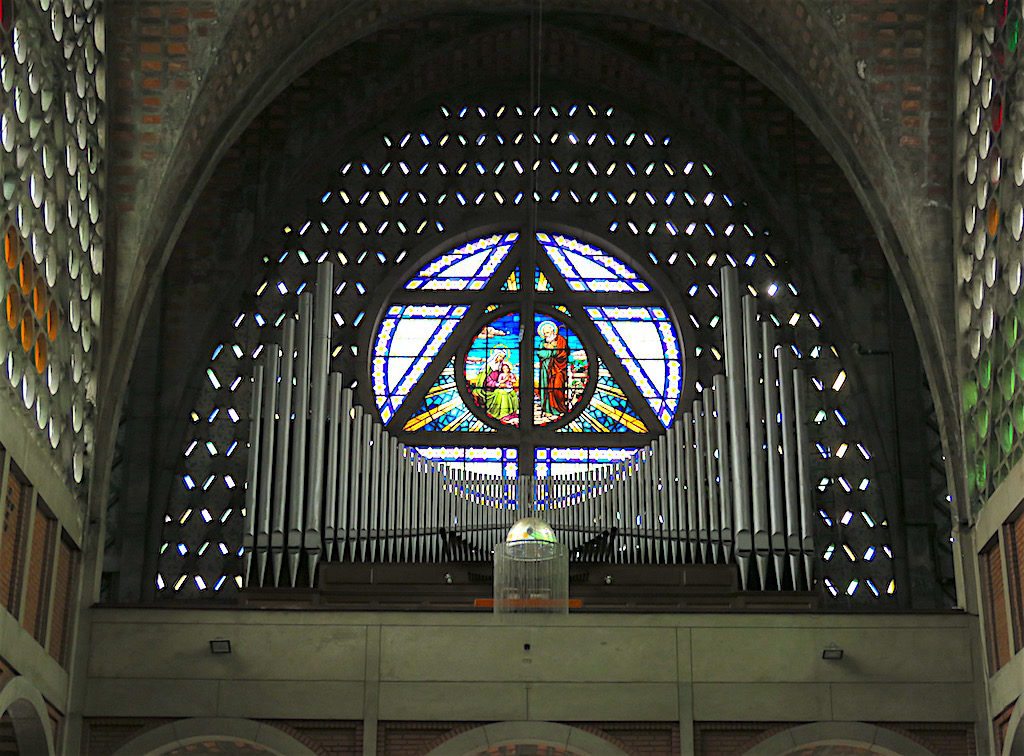 Also, like many other churches in the area, Iglesia San Joaquín has confessionals on both the right and left sides. 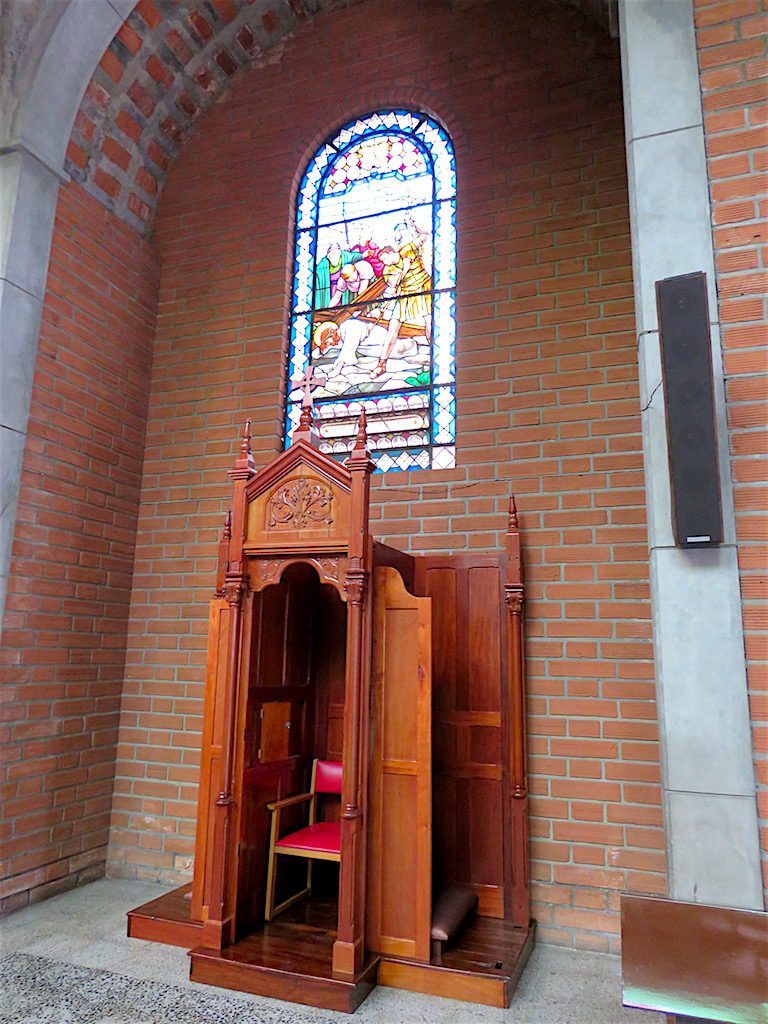 How to Get Iglesia San Joaquín

Also, the church is located about a 15-minute walk from the Unicentro mall in Laureles.

An alternate way to get to the church is via a taxi from your location in the metro area. Many drivers will know where this large church is located. If not, give the driver the address of the church below.

And it is relatively easy to catch a taxi on the streets near the church to return.

Hours: The church is normally open in the mornings for mass and again later in the afternoon for mass. But we recommend calling to make sure the church is open.

The right side of Iglesia San Joaquín 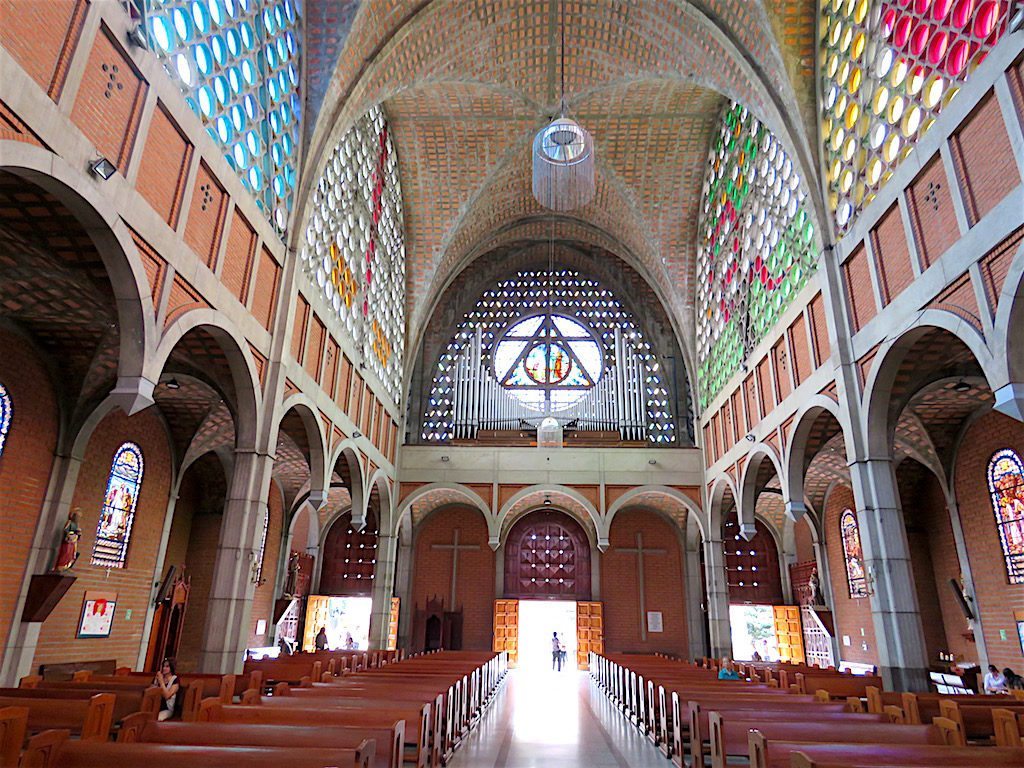 Inside Iglesia San Joaquín looking back at the organ and front doors.

Iglesia San Joaquín in the Laureles-Estadio comuna is not found in any of the 10 English language Colombia travel guidebooks that I have. But it’s worth stopping to see this notable Roman Catholic church if you like beautiful churches with stained-glass windows.