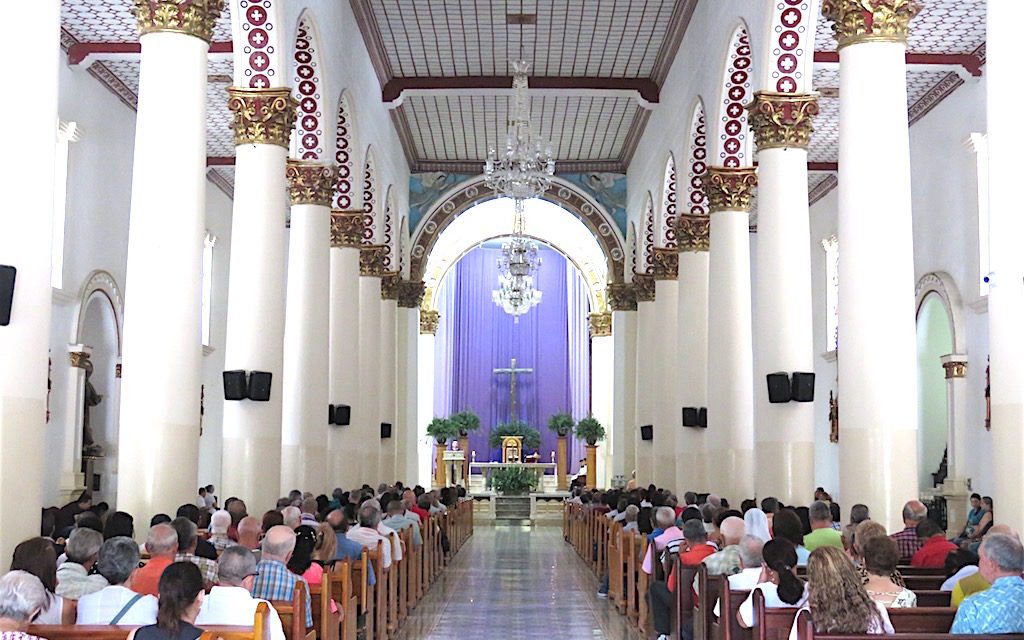 Iglesia de Nuestra Señora del Rosario is a notable and historic Roman Catholic church located in the Itagüí municipality south of Medellín, which is worth seeing if you like old and historic churches.

Iglesia de Nuestra Señora del Rosario is a church with a history that traces back to 1743. In addition, it’s an Eclectic-style church that has many beautiful stained-glass windows and pieces of religious artwork.

Note there is another church named Iglesia de Nuestra Señora del Rosario located in Bello in the north, which we previously looked at and is one of the most beautiful churches in the Aburrá Valley.

So, don’t be confused, this article is only about Iglesia de Nuestra Señora del Rosario, which is located in Itagüí. Note the above photo is the central nave in the church during mass. 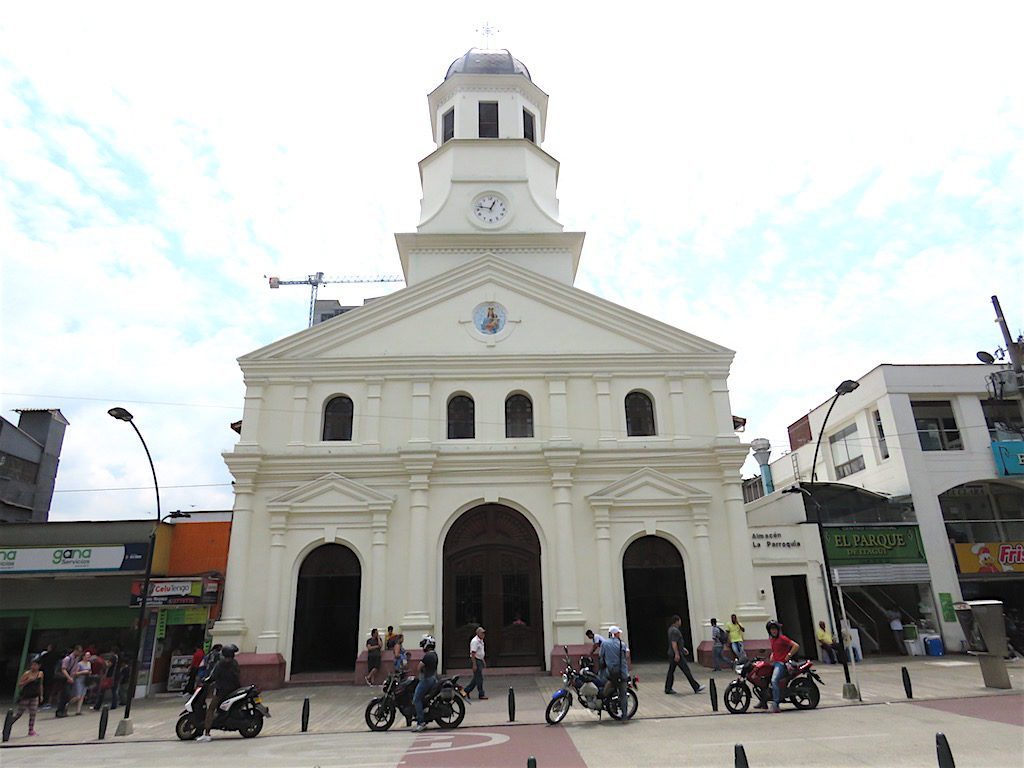 Iglesia de Nuestra Señora del Rosario is dedicated to the Virgin Mary under the invocation of the Rosary.

Iglesia de Nuestra Señora del Rosario’s history can be traced back to 1743. Originally, the territory of Itagüí was considered part of the parish of Iglesia de Santa Gertrudis, located in Envigado.

However, it was difficult for residents of Itagüí to travel to Envigado due to the scarcity of roads and the difficulty of crossing the Medellín River, especially during the rainy season.

So, Itagüí finally obtained a license to build a church at the end of 1743.  And the parish of Nuestra Señora del Rosario began to form in 1825.

But it wasn’t until February 25, 1832, when Monsignor Fray Mariano Garnica and Dorjuela the bishop of Santa Fe de Antioquia officially issued a decree creating a new parish in Itagüí under the invocation of Our Lady of the Rosary.

In addition, Father Felipe Restrepo was appointed at the first pastor of the parish, who oversaw the parish until his death in 1851. While the church is located in the municipality of Itagüí, it is still considered part of the Archdiocese of Medellín. 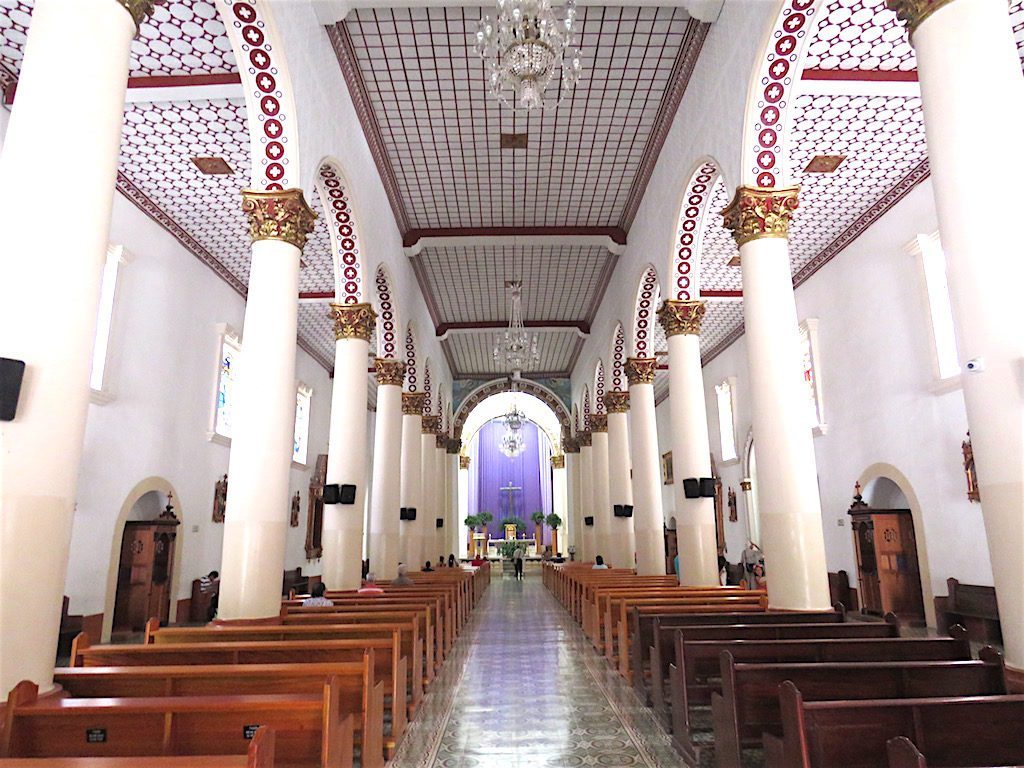 Inside the church you will find a beautiful white and cream-colored interior with some gold and burgundy trim. And the church has wooden pews like most churches in Colombia.

The church has three longitudinal naves and two additional lateral naves to the right and left of the main altar. 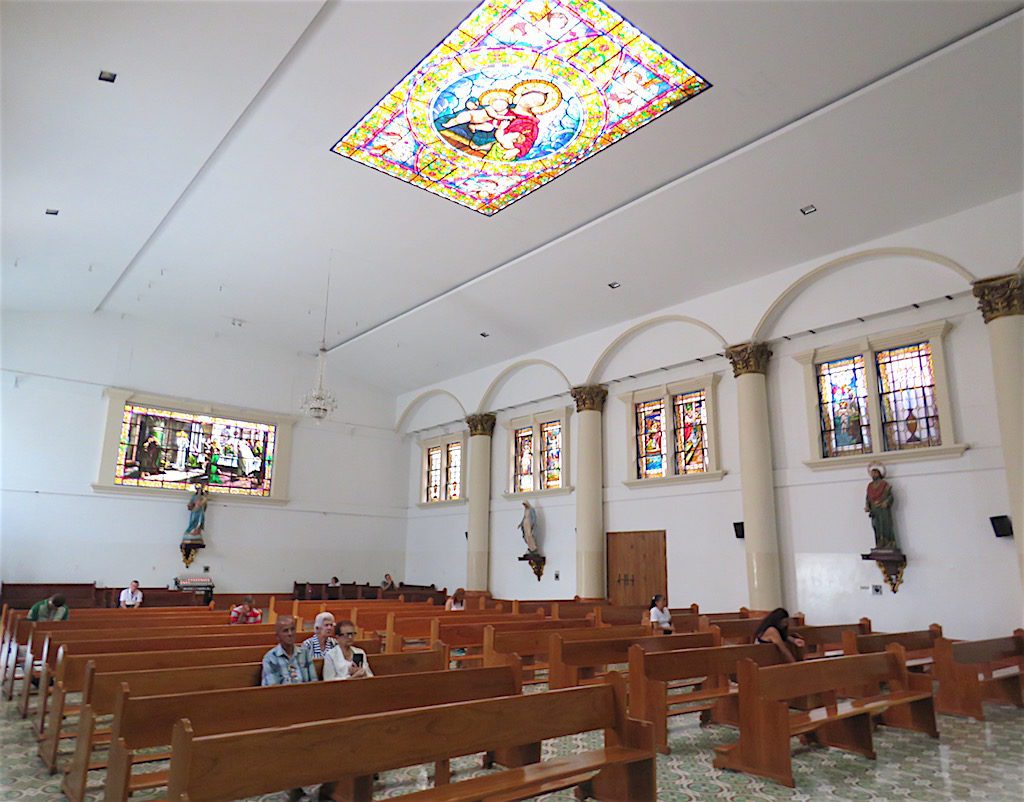 The lateral nave to the left of the main altar, note the stained-glass skylight

Most notably it has two large stained-glass skylights located in the left- and right-side naves, which I haven’t seen in any other churches in the Medellín area. 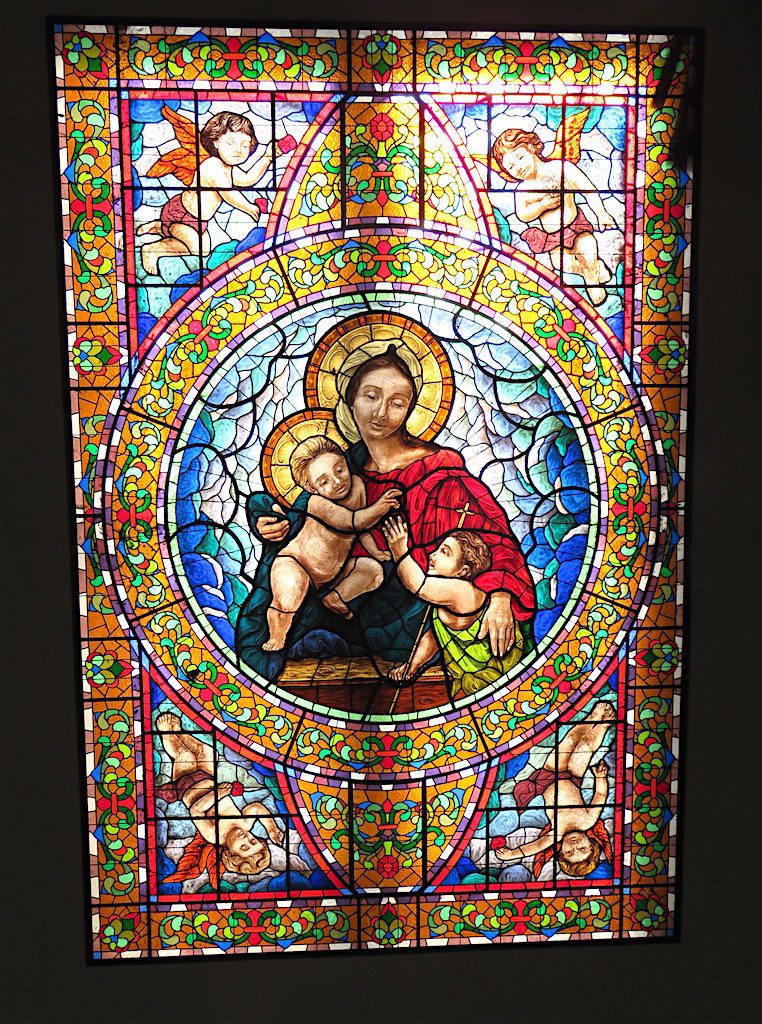 One of the stained-glass skylights 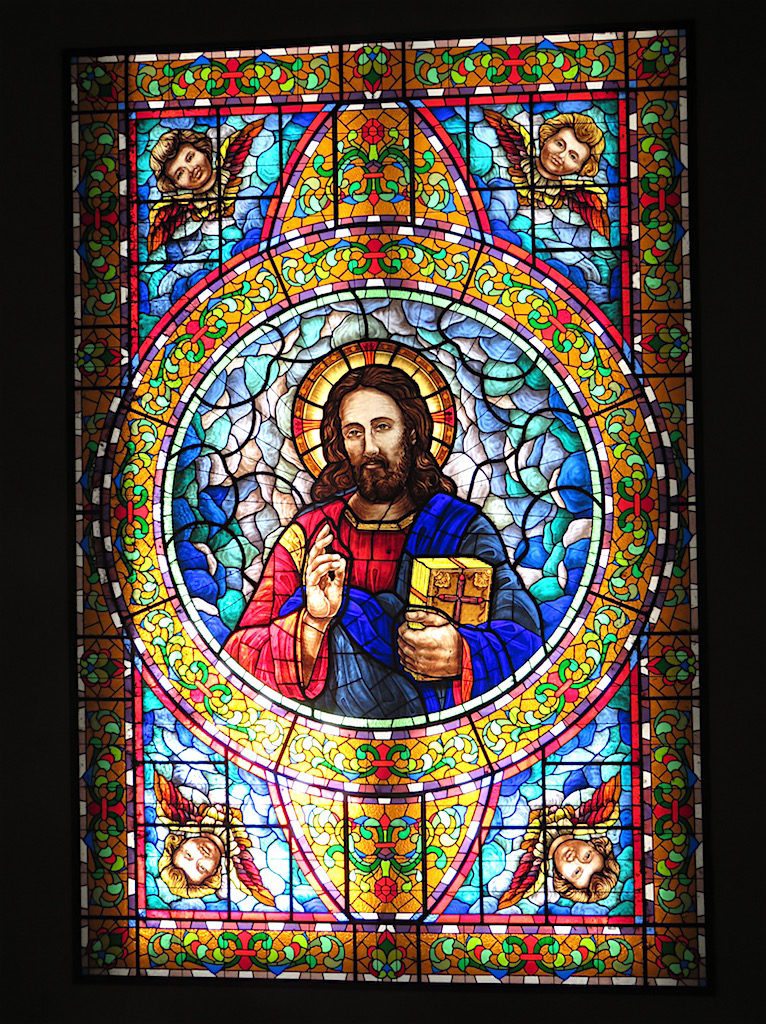 The other stained-glass skylight

In addition, the church has several more beautiful stained-glass windows throughout the church. 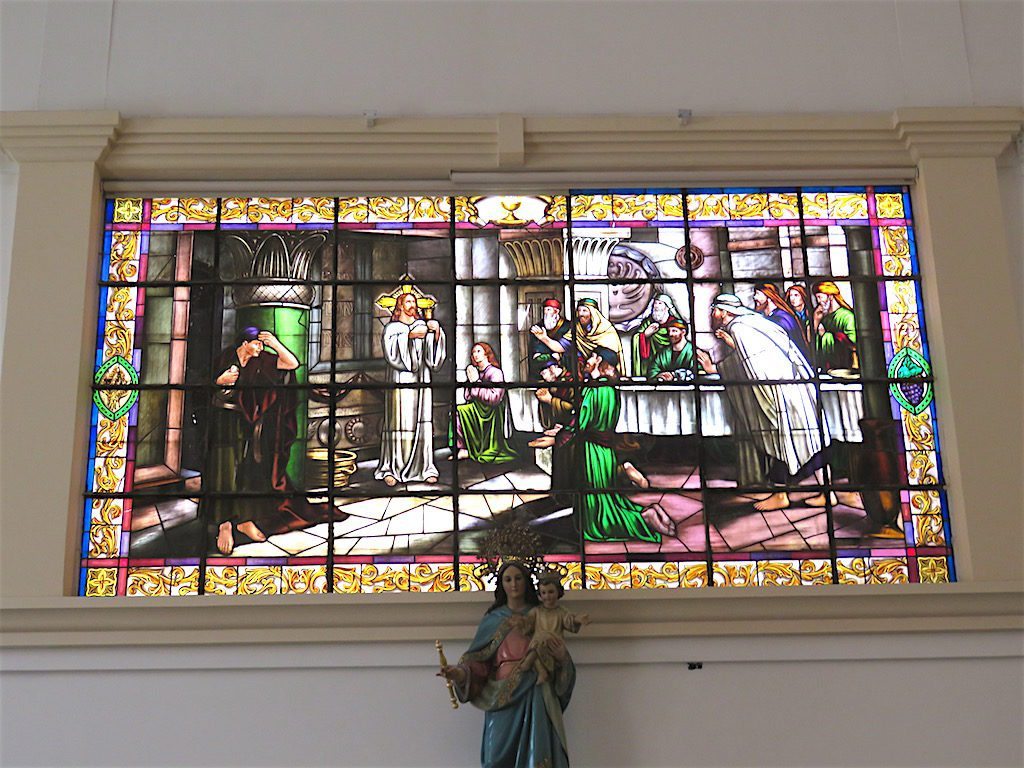 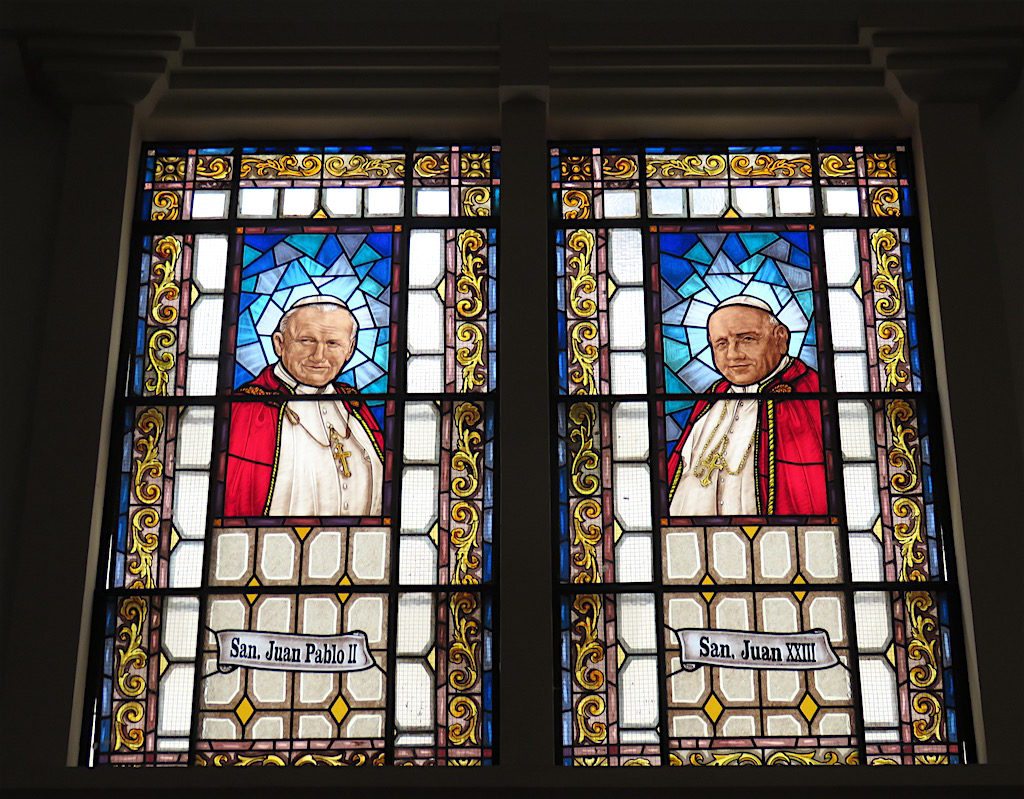 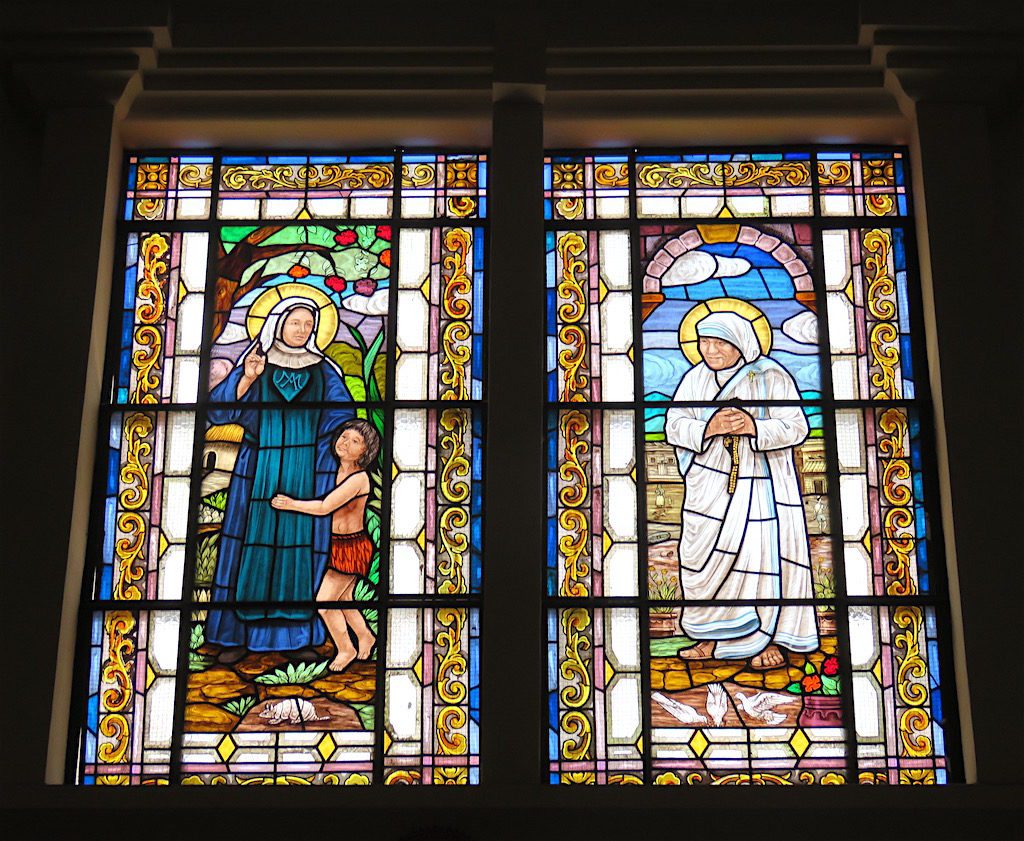 And another stained-glass window 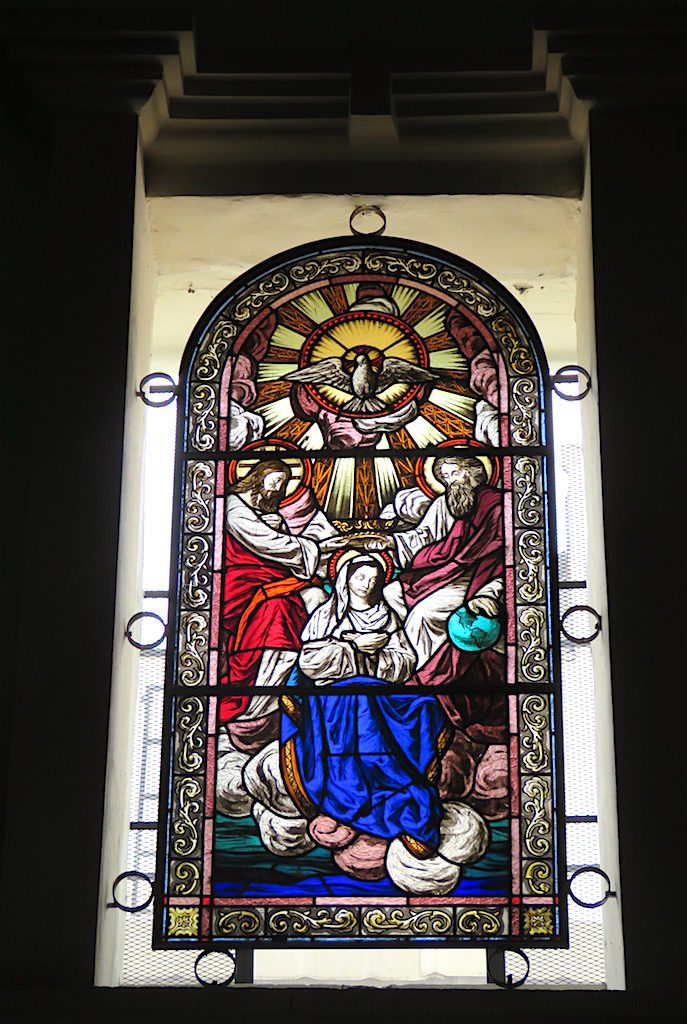 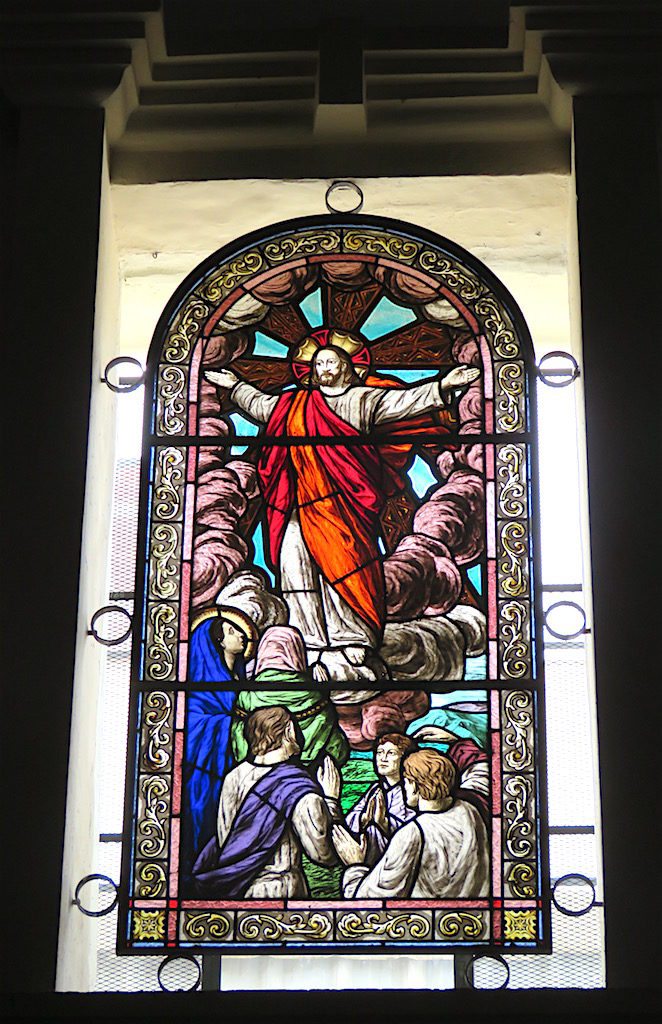 There are main more stained-glass windows like this one 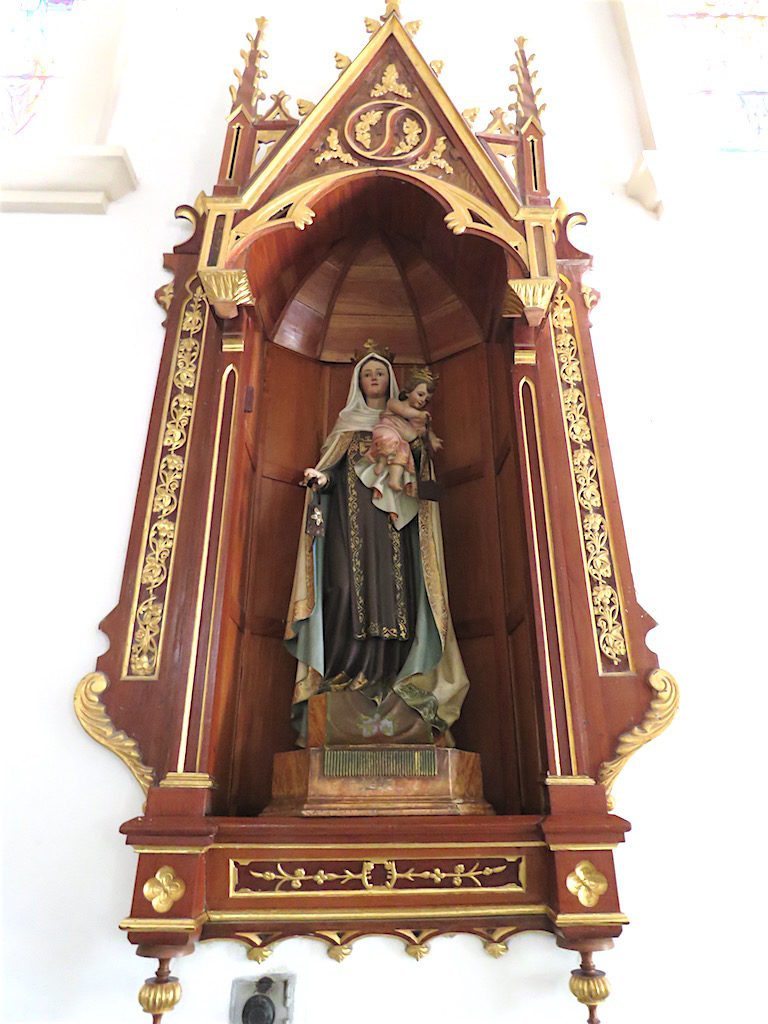 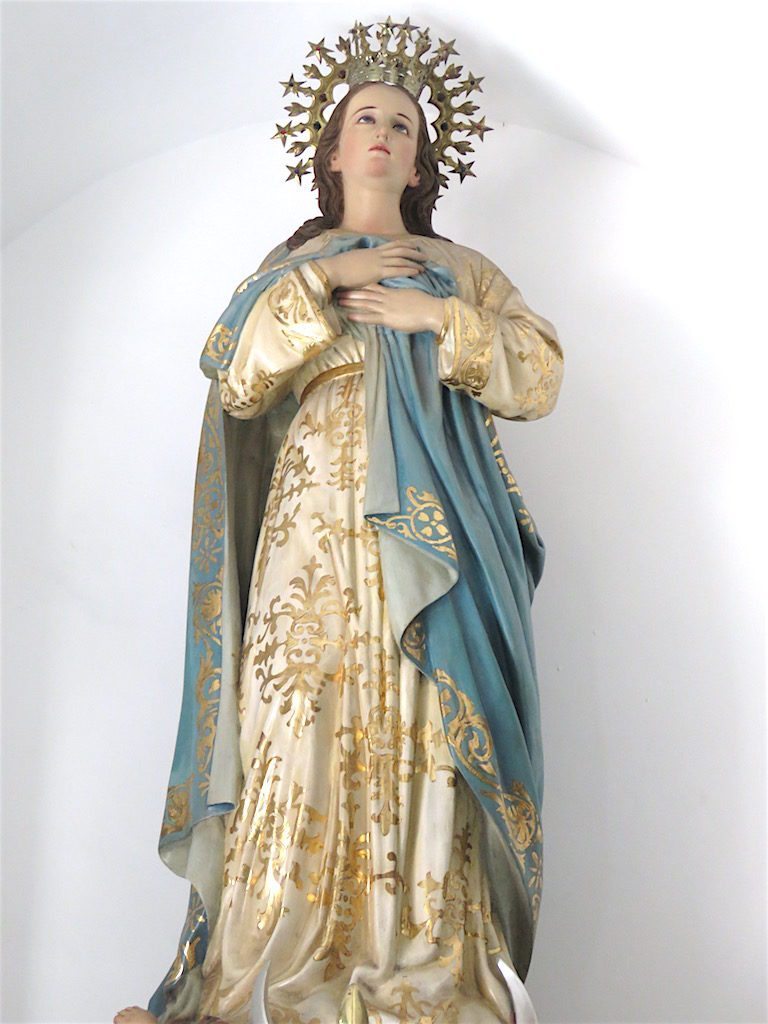 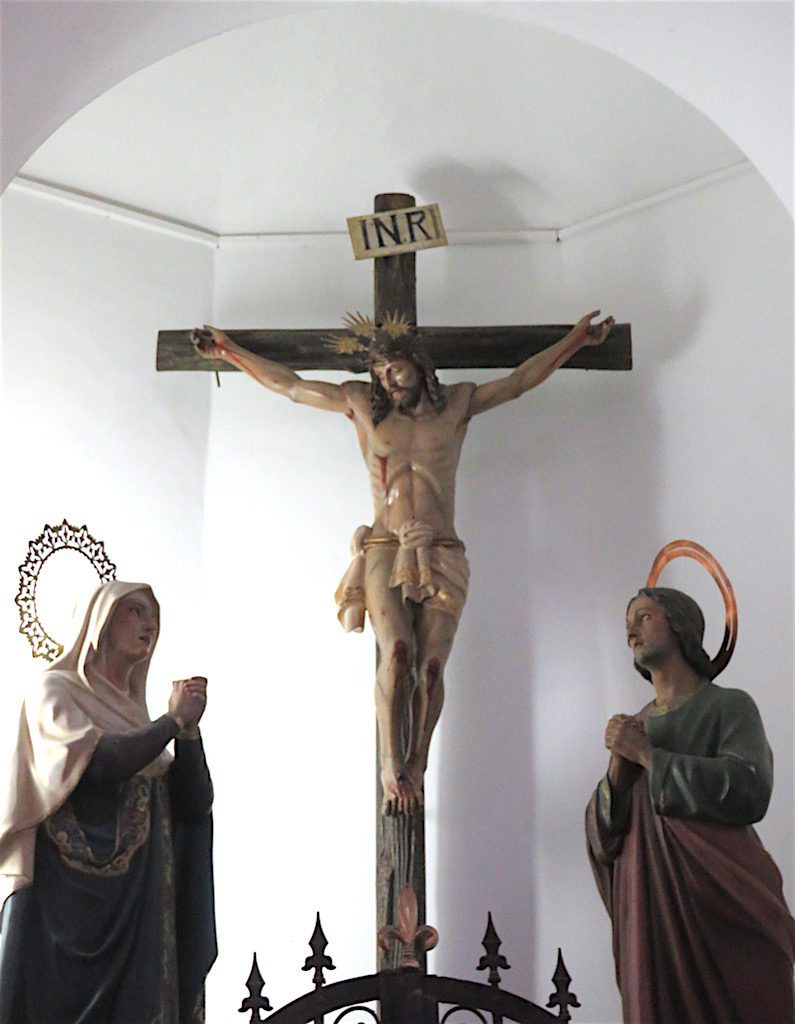 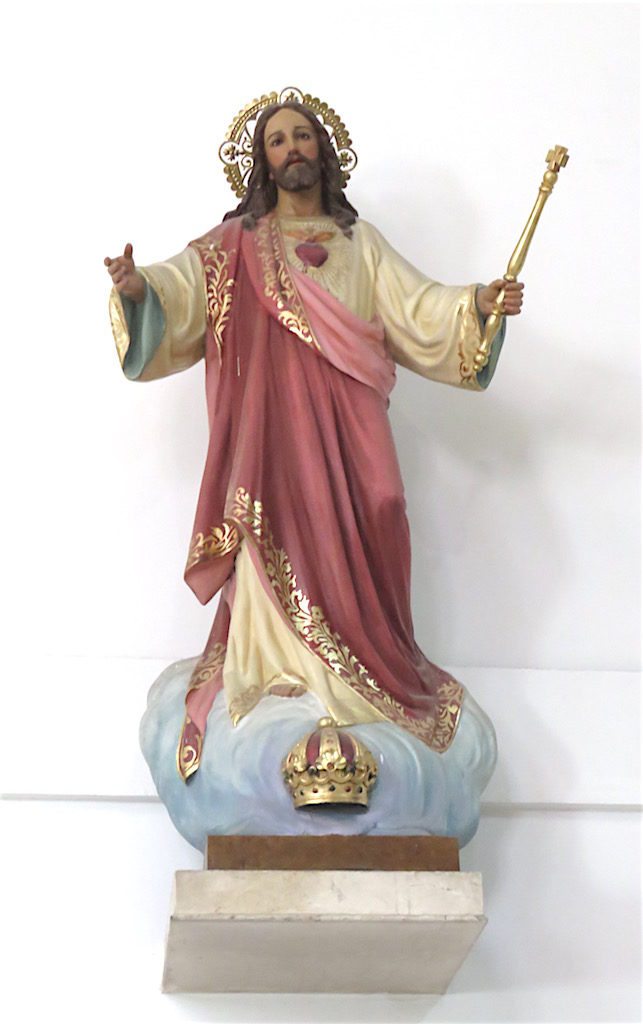 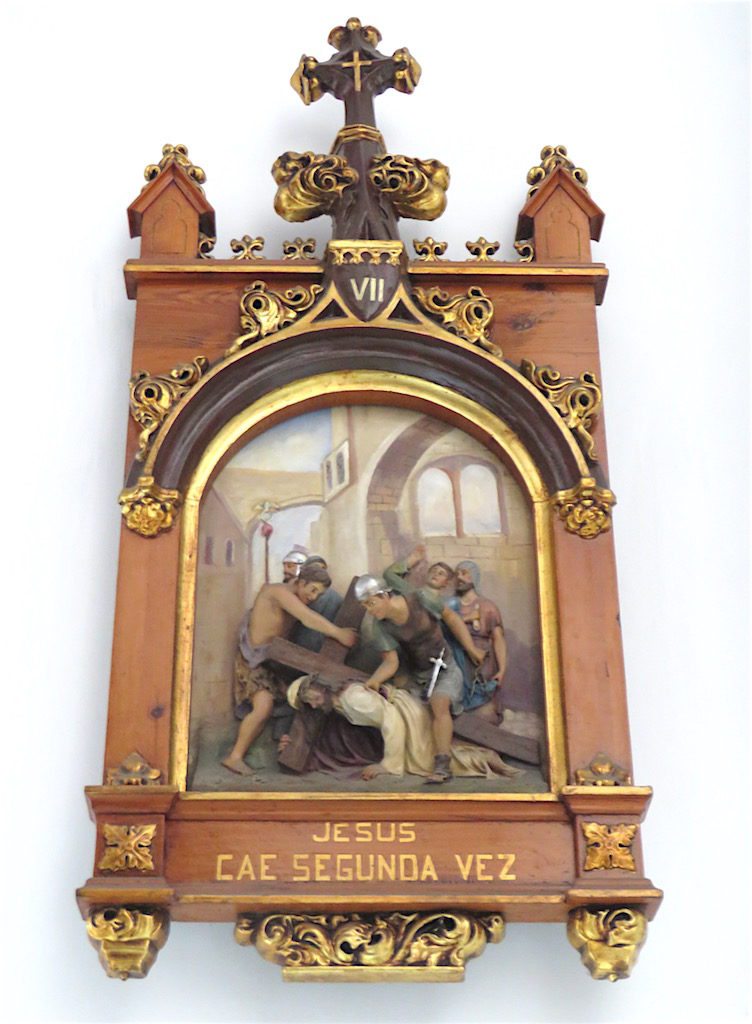 There are many more pieces of religious artwork like this

And like many other churches in the city, Iglesia Nuestra Señora del Rosario has confessionals on both the right and left sides. 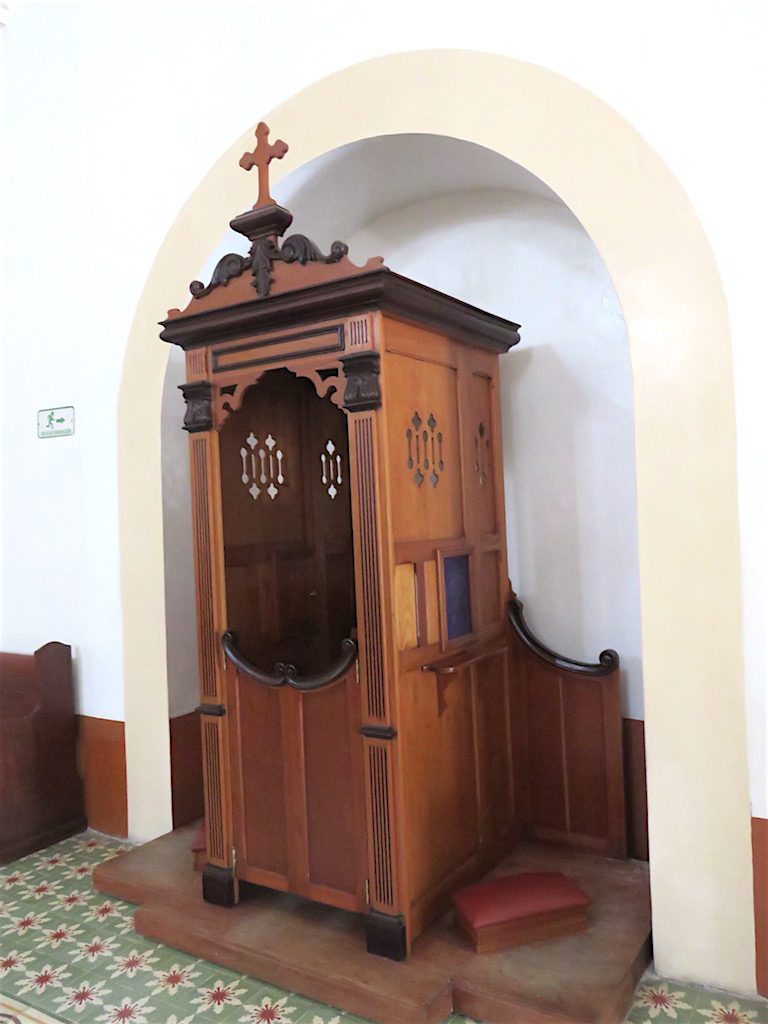 How to Get to Iglesia de Nuestra Señora del Rosario

The easiest way to get to Iglesia de Nuestra Señora del Rosario is via a combination of the Medellín Metro and taxi or bus. To get there you can take Line A of the metro south to the Itagüí metro station.

There are also buses available at the metro station going to Parque de Itagüí for a fare of only 2,200 pesos.

An alternate way to get to the church is via a taxi from your location. Many taxi drivers in Medellín will know where Parque principal de Itagüí is located. If not, give the driver the address of the church below.

Hours: The church reportedly has several masses scheduled during the day but the mass schedule isn’t posted in the church. I visited the church at noon when mass was scheduled. We recommend calling to make sure the church will be open when you go. 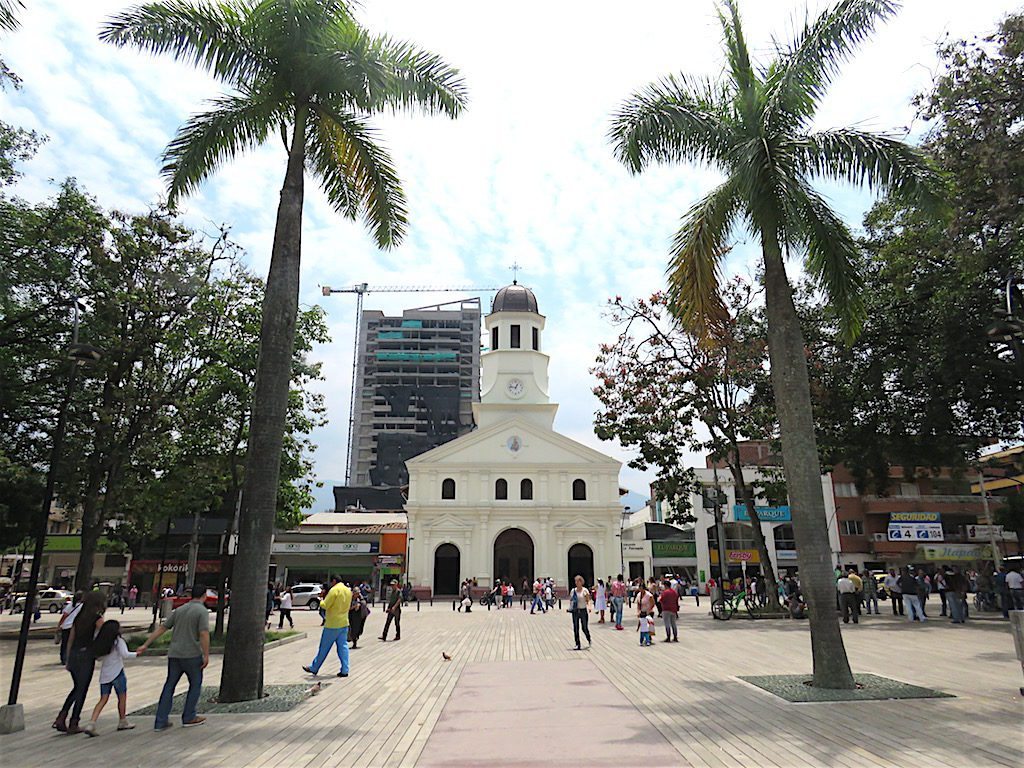 Iglesia de Nuestra Señora del Rosario is located at Parque de Itagüí, which is the principal park in the Itagüí municipality.

The daily life for many locals in Itagüí is typically centered around Parque de Itagüí, which is a one square block plaza that has a number of trees for shade. In addition, this park is surrounded by several small restaurants, bars and shops.

Parque de Itagüí is considered by locals to be a convenient place in Itagüí to meet up with friends. 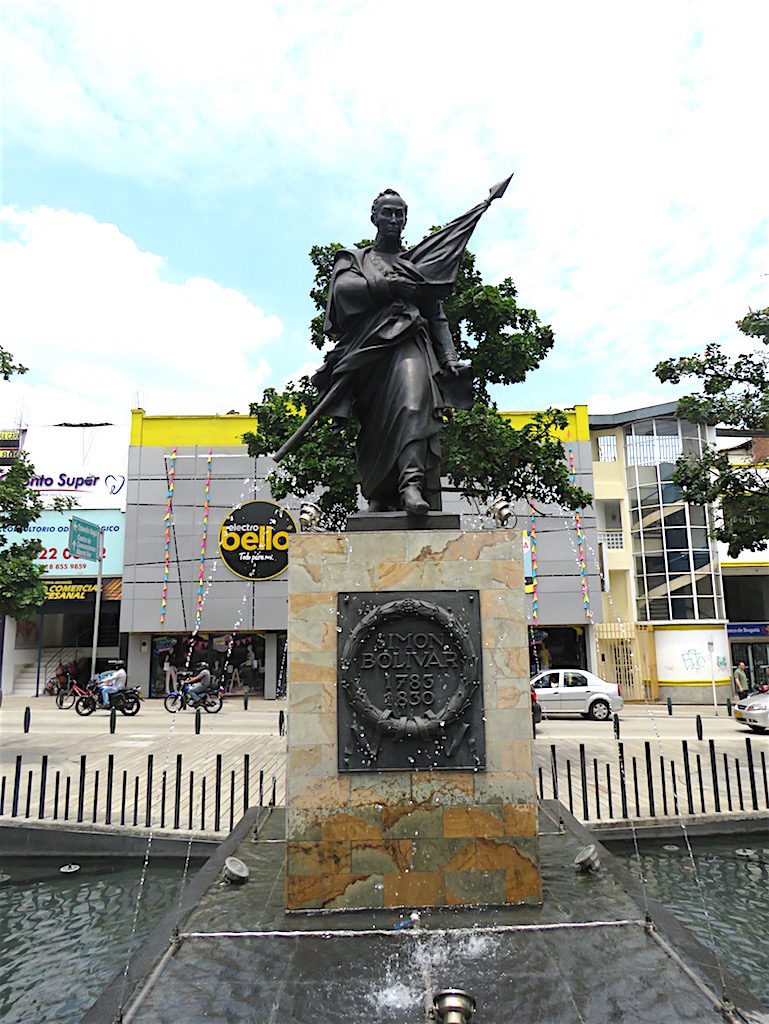 Also, in the park is a statue of Simón Bolívar, which is common in many of the parks in Colombia. Itagüí is a separate municipality in the Aburrá Valley with a population of over 230,000. And it’s located west of Envigado and Sabaneta and south of Medellín. 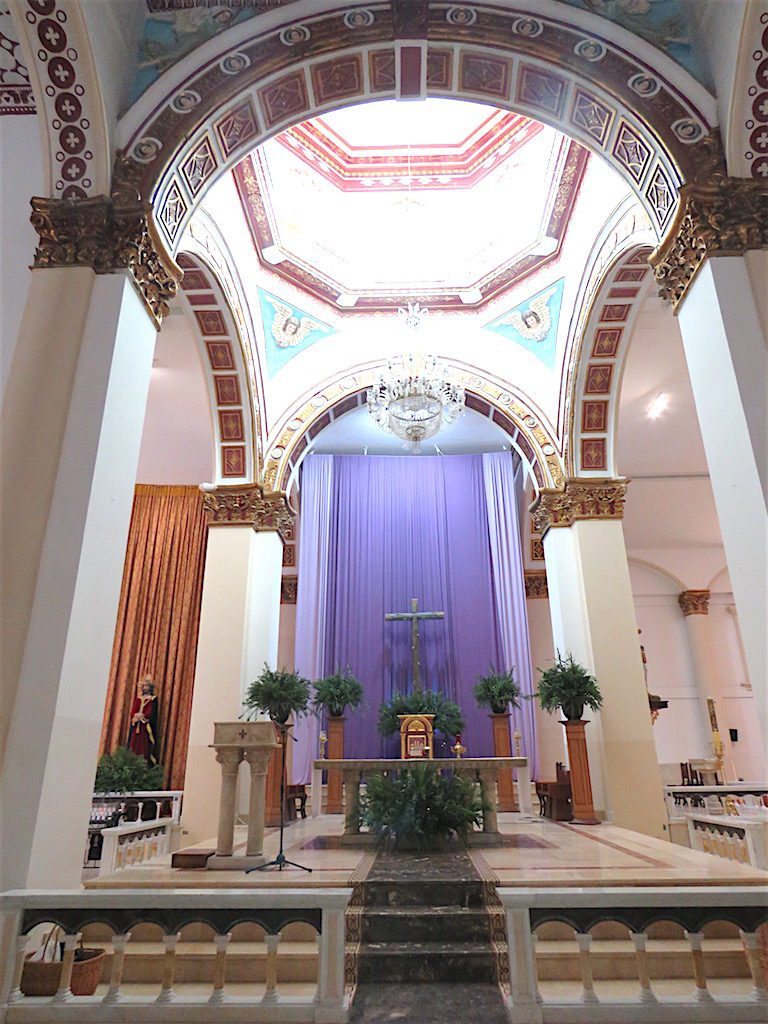 Iglesia de Nuestra Señora del Rosario in Itagüí is not found in any of the 10 English language Colombia travel guidebooks that I have. But it’s worth stopping to see this notable Roman Catholic church if you like old and historic churches. 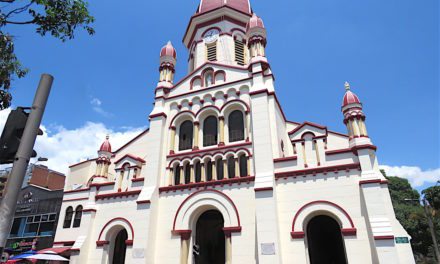 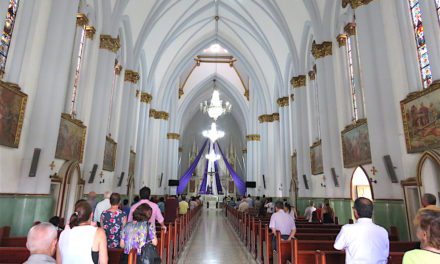 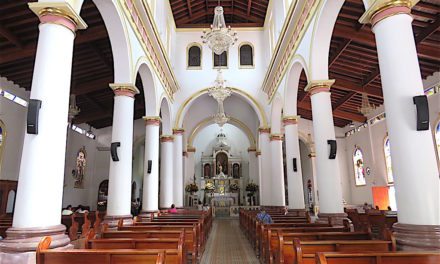