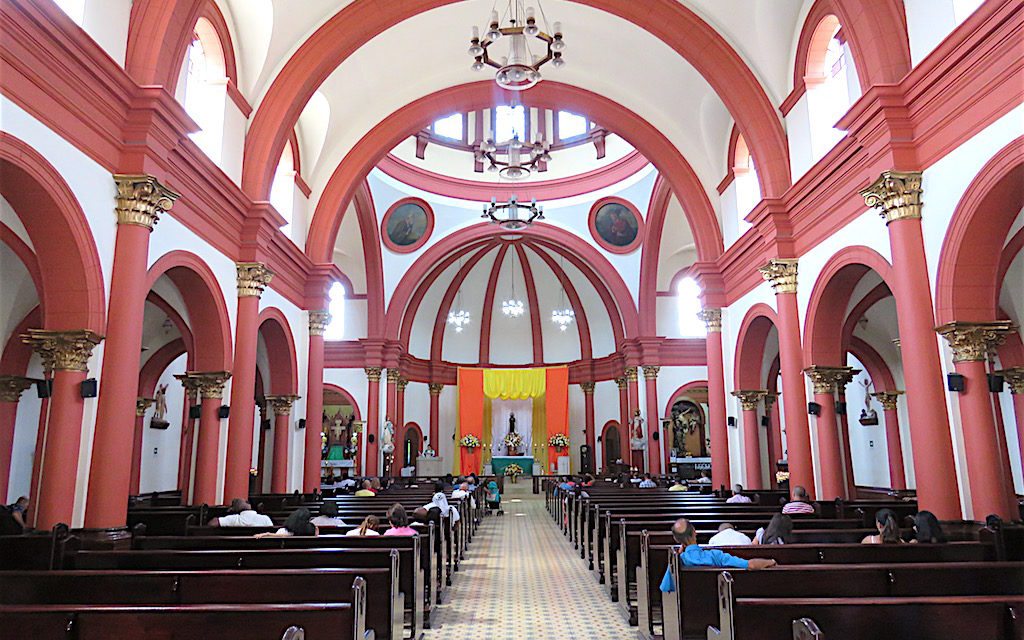 The church is located next to Plaza San Antonio, which is also worth seeing. Plaza San Antonio has four Fernando Botero sculptures including one that has a violent history, as seen later in this article. Iglesia San Antonio is one of the oldest churches in Medellín. And it’s a hidden gem that isn’t visited by many tourists, as it’s only found in one out of 10 English language Colombia travel guidebooks I have.

Iglesia San Antonio is one of the most traditional churches found in El Centro, yet it’s one of the least visited. It’s as if people only recognize the large church dome as a reference point and nothing more.

In addition, we included Iglesia San Antonio in our list of the top 14 churches in Medellín and the Aburrá Valley. 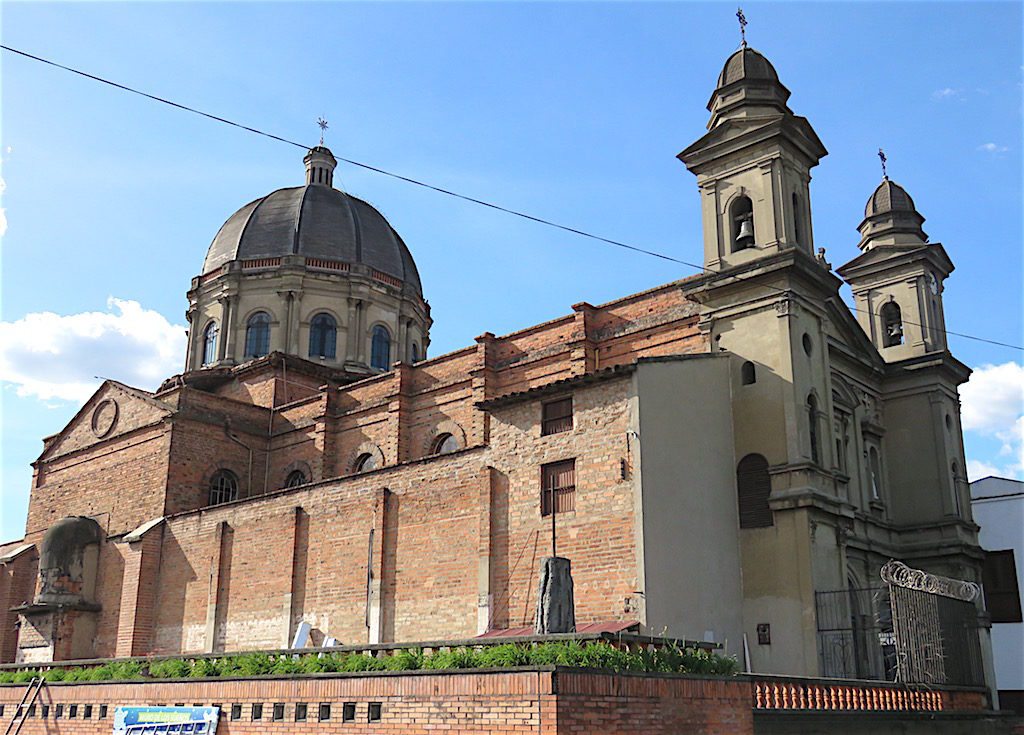 Iglesia San Antonia is a Renaissance style church that is dedicated to San Antonio de Padua.

The architect for the church was Filipe Crosti and it was built over a period from 1874 to 1902. Father Frey Benjamin Maschiantonio was instrumental in getting what was originally a Franciscan church built.

The church underwent a major renovation over a period of nearly two decades from 1929 to 1945. During this time, the large dome was added to the church as well as additional altars and the organ.

Several decades ago Iglesia San Antonia went from being a church open all the time for the community that surrounded it to a church that opens to the people only during certain hours. This is due to many of the houses in this area in El Centro having disappeared decades ago leaving behind mainly commercial businesses.

The Roman Catholic parish for the church was created by Archbishop Monseñor Tulio Botero Salazar in August 1961. And its first parish priest was the Fray Bernardo Saldarriaga. 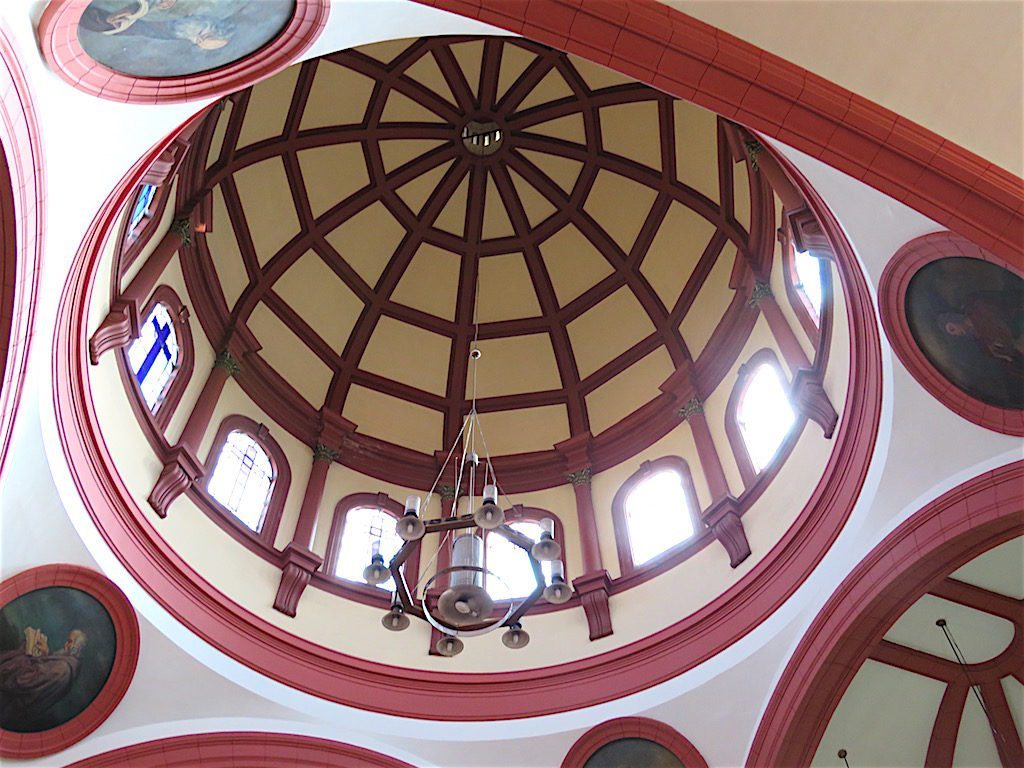 Inside the church you will find a beautiful interior that is white and red with some gold trim. Most noteworthy is the large dome in the church, which has some simple stained-glass windows as well as some artwork near the dome. Also, there are many pieces of religious artwork to be found throughout this church. 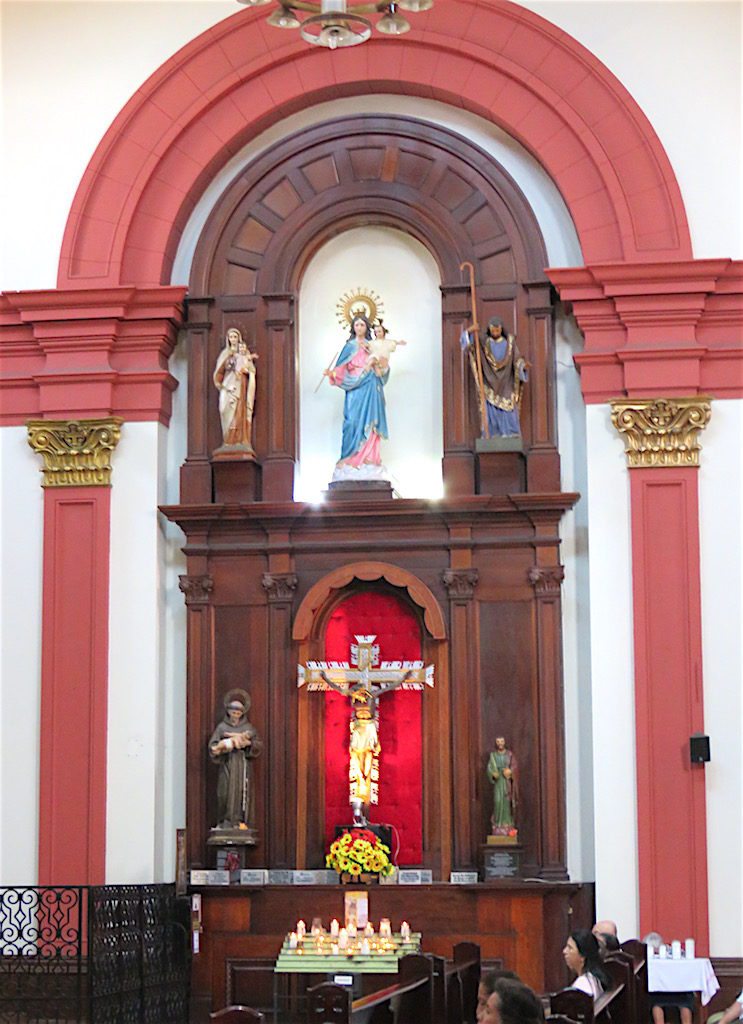 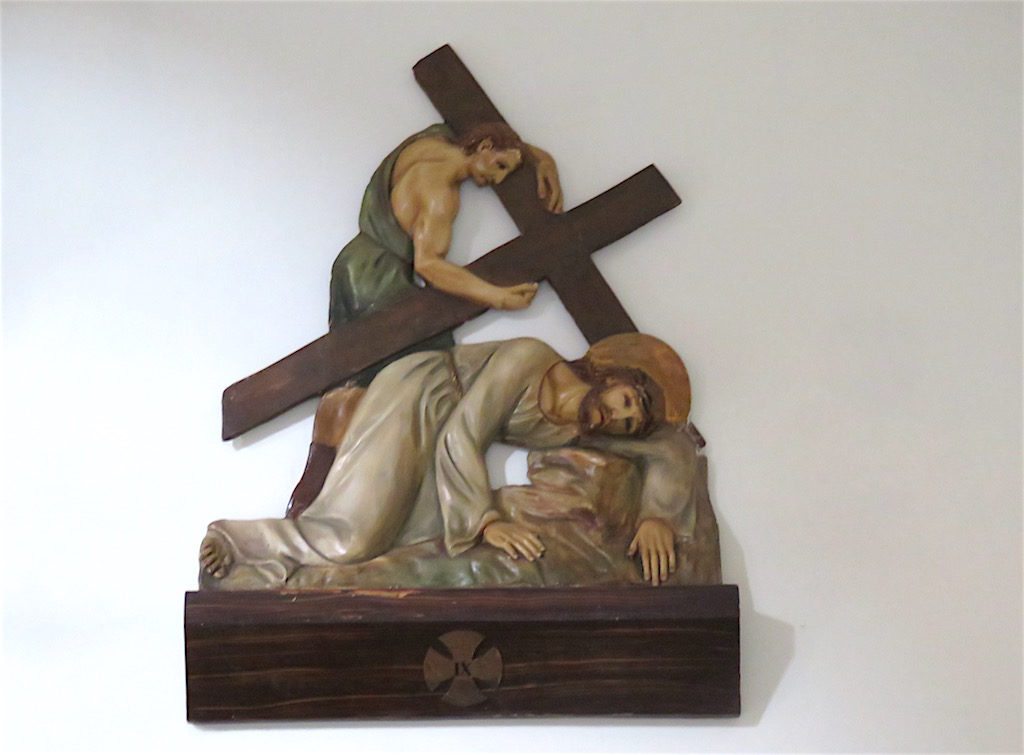 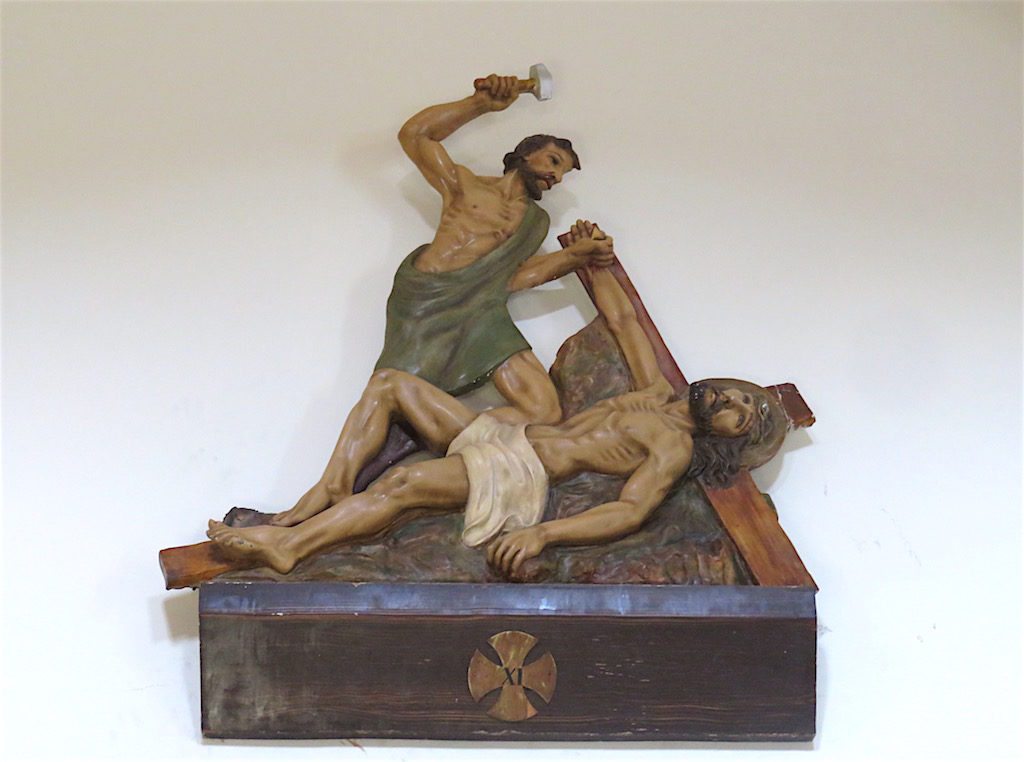 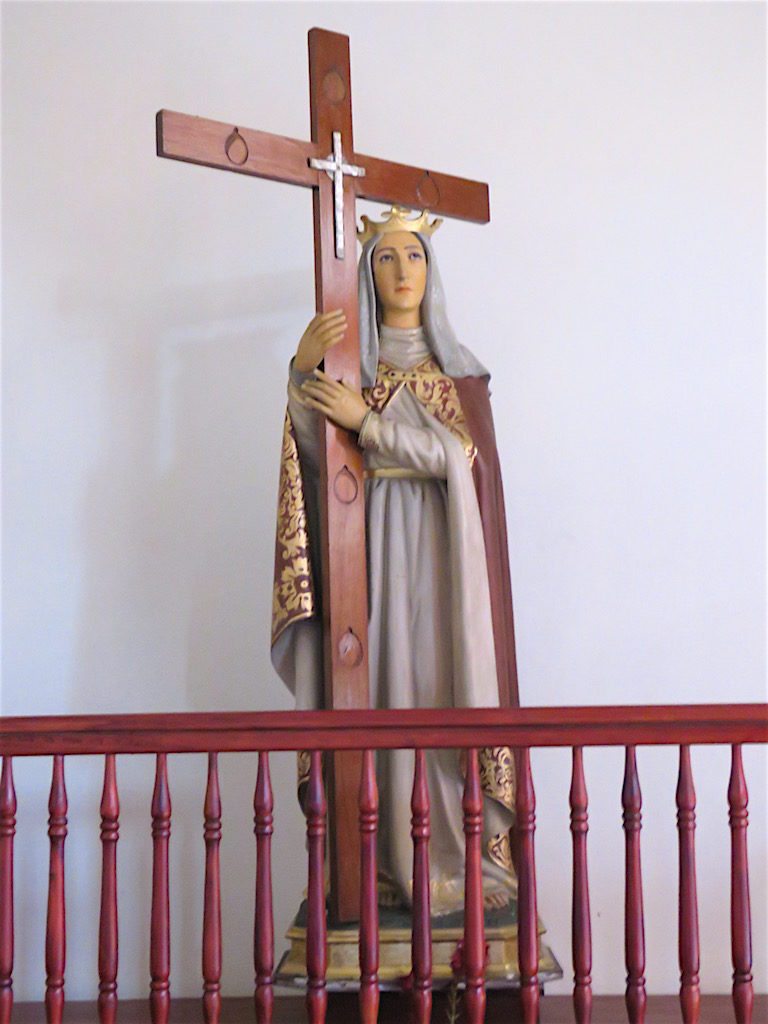 Another piece of religious artwork in Iglesia San Antonio 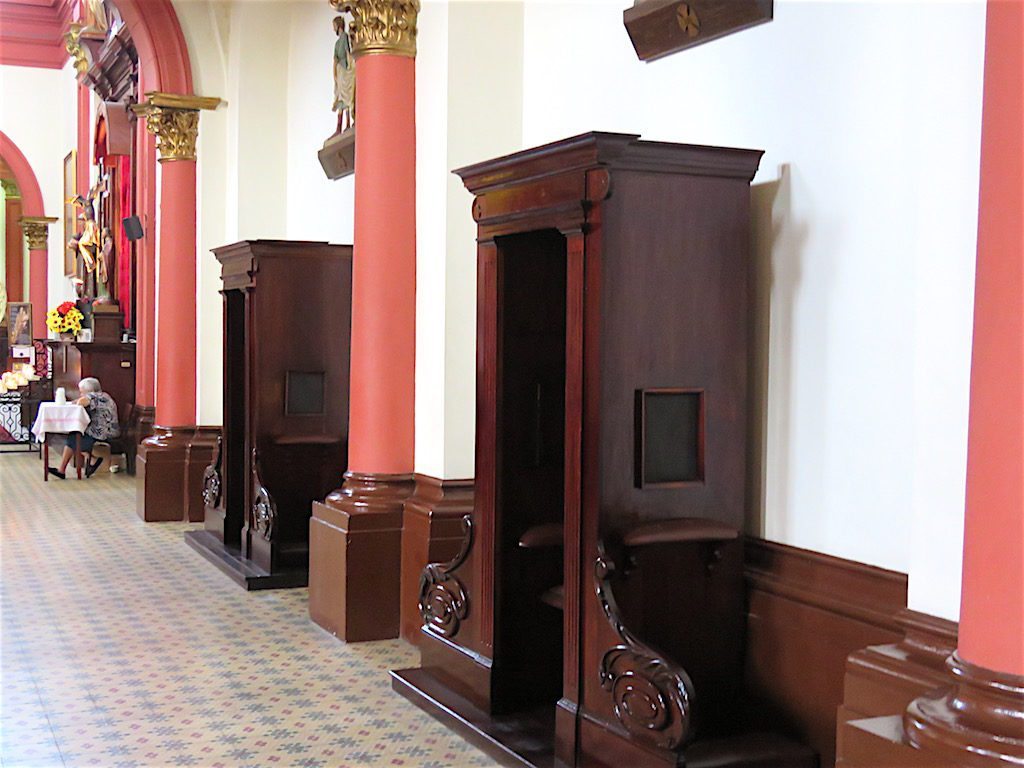 Similar to many other churches in the city, Iglesia San Antonio has confessionals that are found along the right and left aisles in the church. 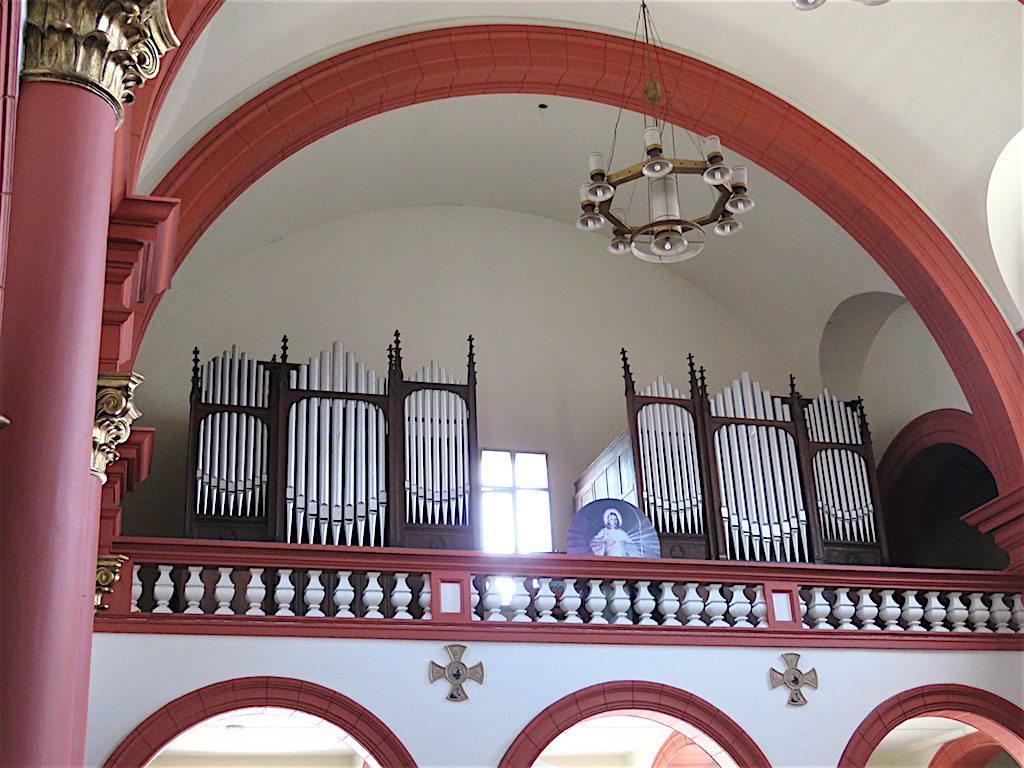 In addition, the organ in the church is located on the second floor. 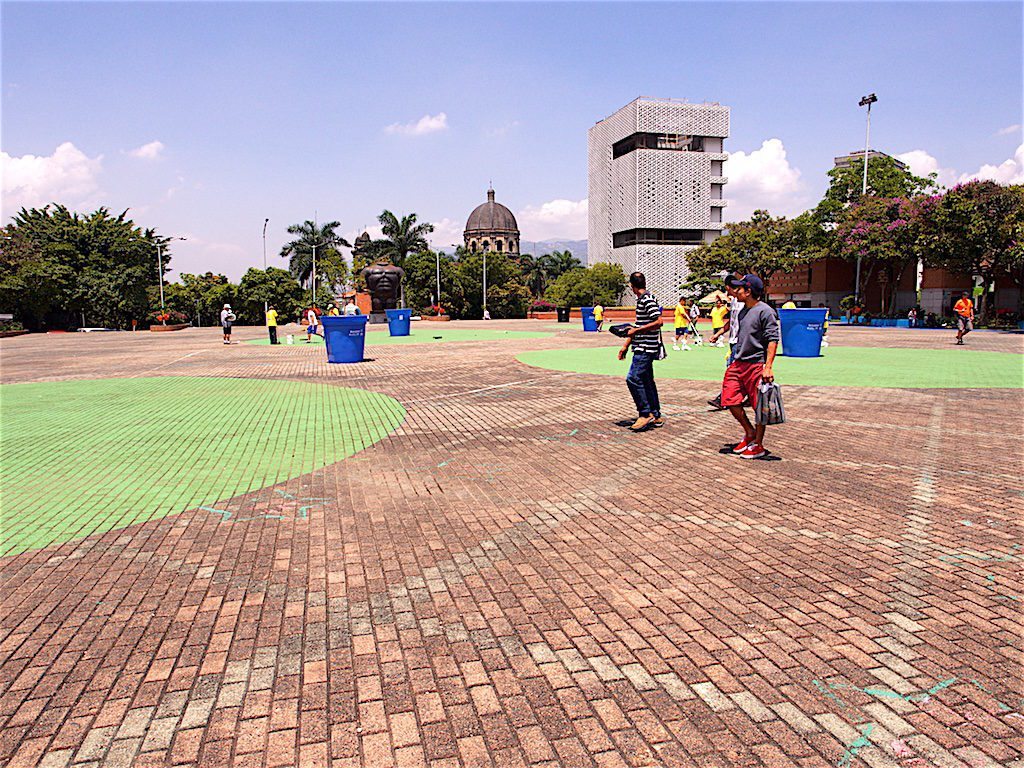 The plaza area is notorious for a deadly bomb attack in the mid 1990s. On June 10, 1995, a bomb was placed in “The Bird” Botero sculpture located on the plaza and it detonated when a concert was going on. 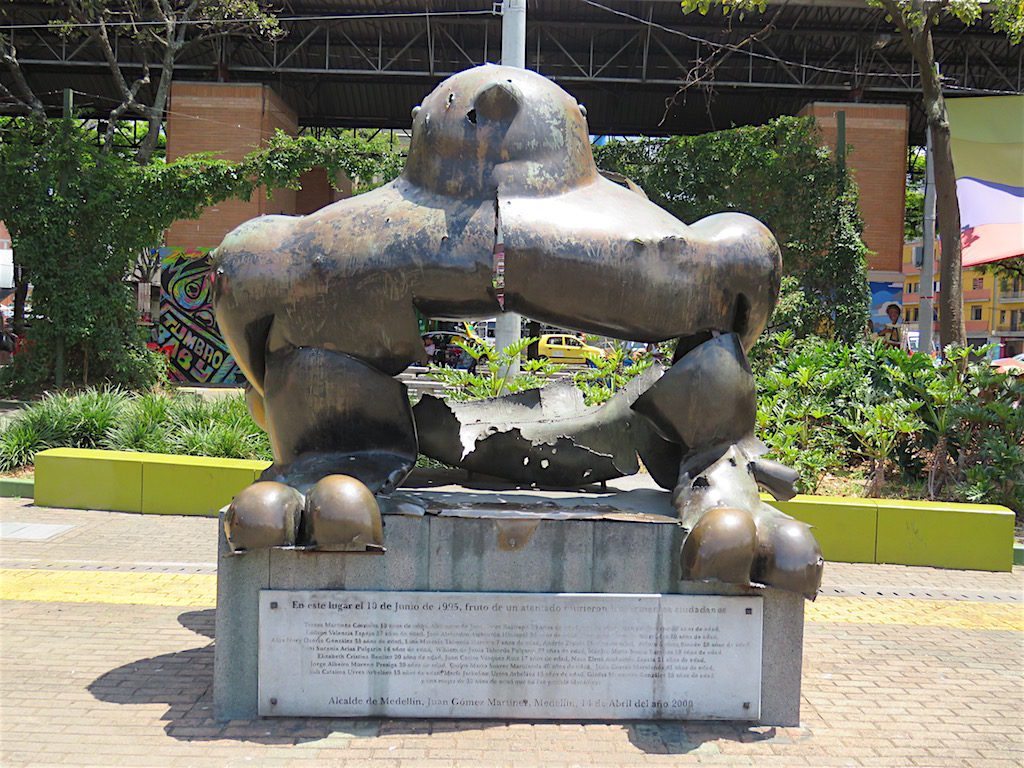 Fernando Botero bird sculpture that was bombed in 1995

The dynamite and shrapnel bomb reportedly weighed about 20 pounds. When it detonated the result was 23 deaths and more than 200 wounded. The names of 22 men, women and children killed in the bombing are currently on a plaque below “The Bird” statue. In addition, one woman who was killed in the attack remains unnamed.

The bomb attack reportedly occurred one block away from a police barracks. And no group claimed responsibility for it. But guerrilla groups like the FARC and gangs of cocaine traffickers were suspected as they had engaged in such acts of terrorism in the past in Colombia.

The explosion of the bomb came about 24 hours after the chief of the Cali cocaine cartel was arrested by a joint army and police search squad. But no connection to the bombing was confirmed. Also, Botero’s son, Fernando Botero Zea, was Colombia’s Minister of Defense at the time of the bombing. 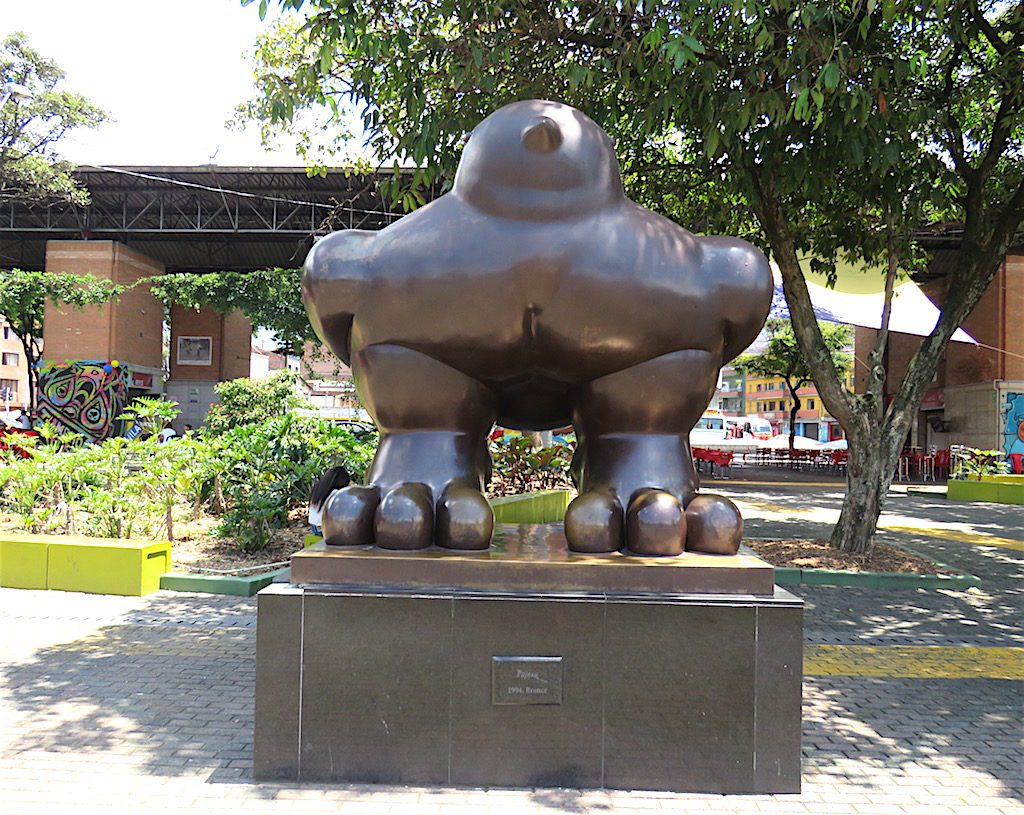 After the bombing, in 2000, Fernando Botero created and donated an identical sculpture and placed it next to the original “Wounded Bird” sculpture. The new sculpture is titled El Pájaro de la Paz (The Bird of Peace). The reasoning behind not removing the original bird sculpture damaged by the bombing is that Medellín would not learn from its violent past. There are two additional Botero sculptures located in Plaza San Antonio. 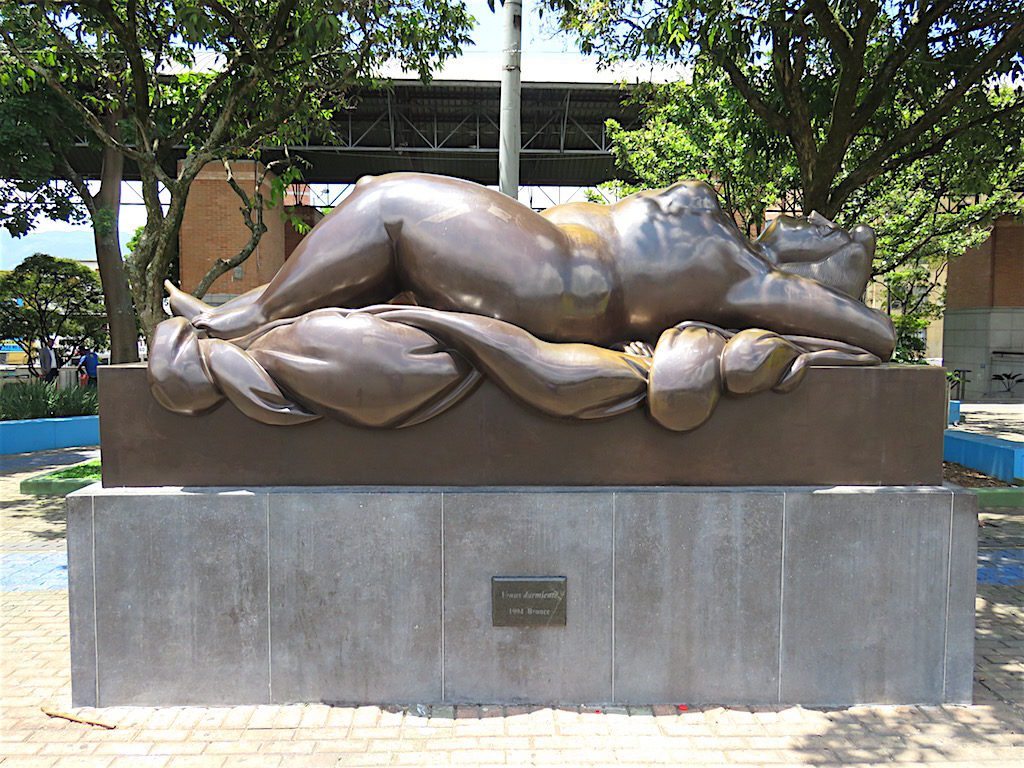 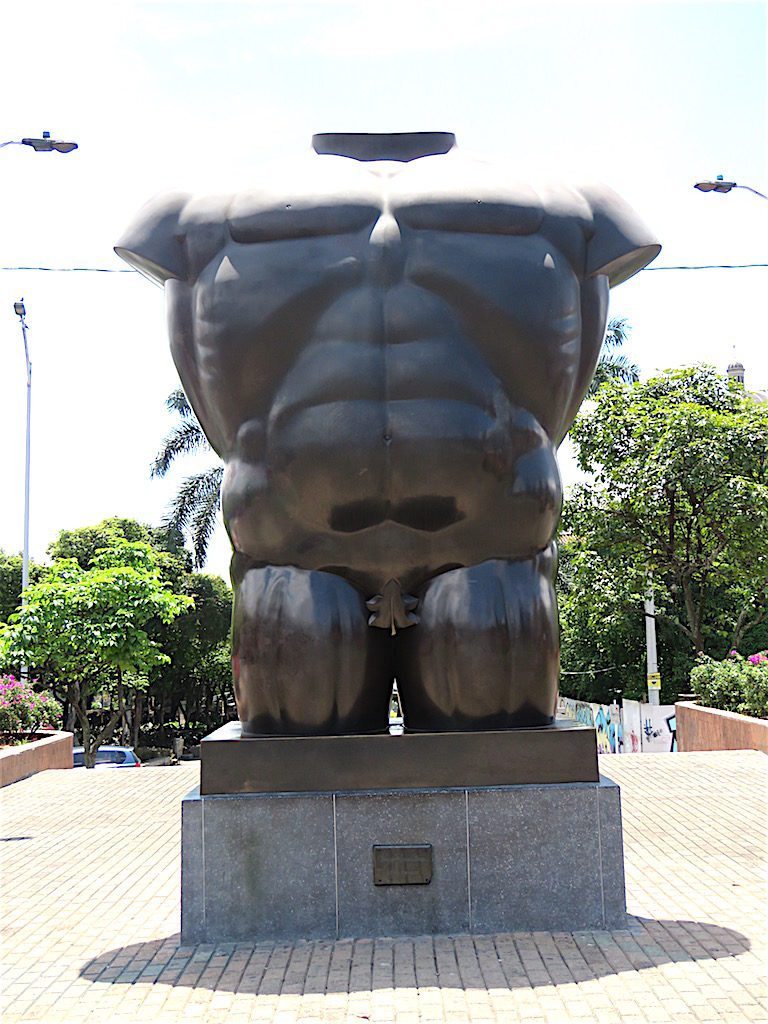 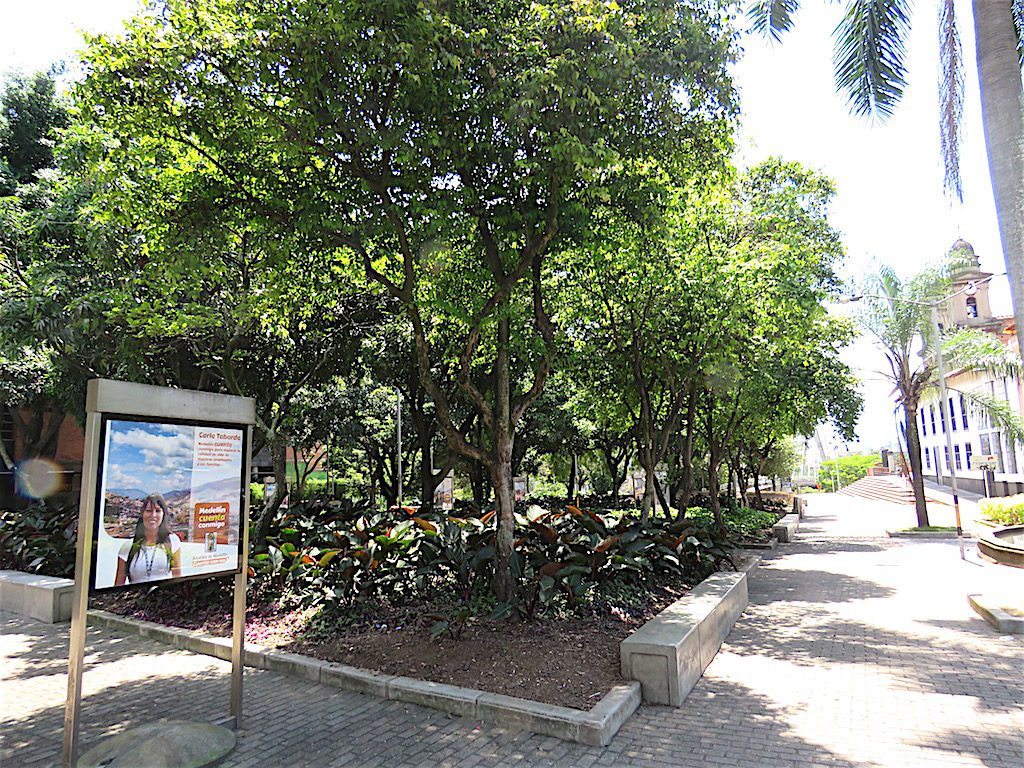 West of the plaza is located a small park (Parque San Antonio) that is next to Iglesia San Antonio. 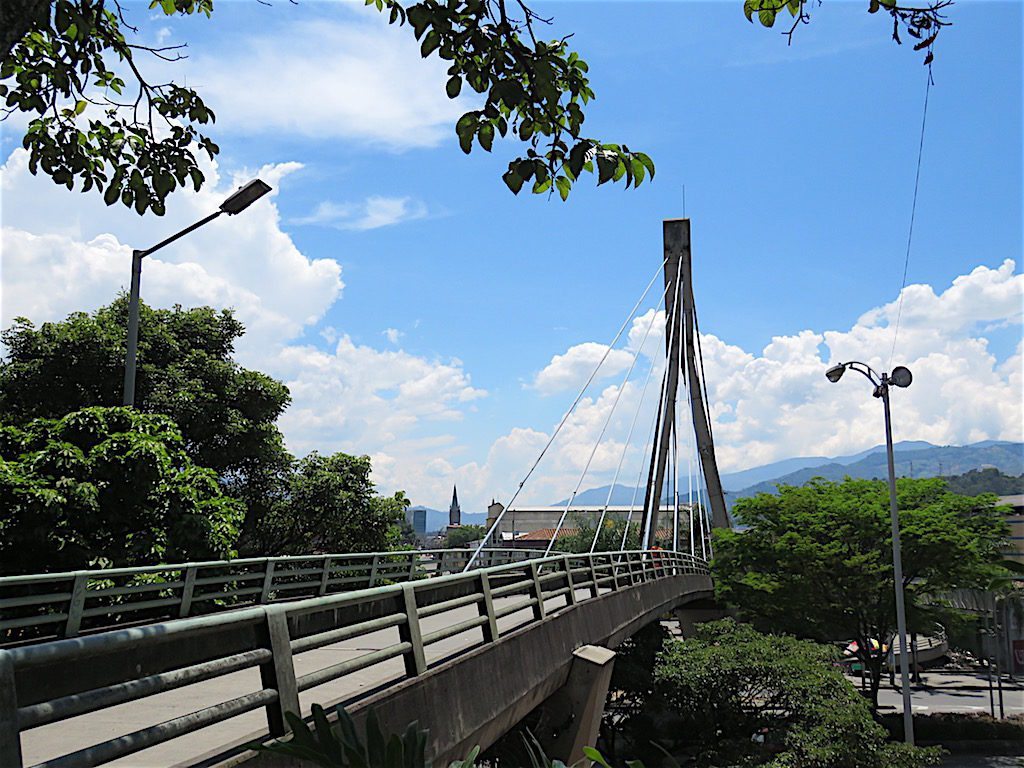 In addition, next to the church at the end of Plaza/Parque San Antonio there is a picturesque pedestrian bridge that crosses San Juan street.

On the Medellin Guru website, we have looked at 11 different parks and plazas in the Medellín and Aburra Valley area: 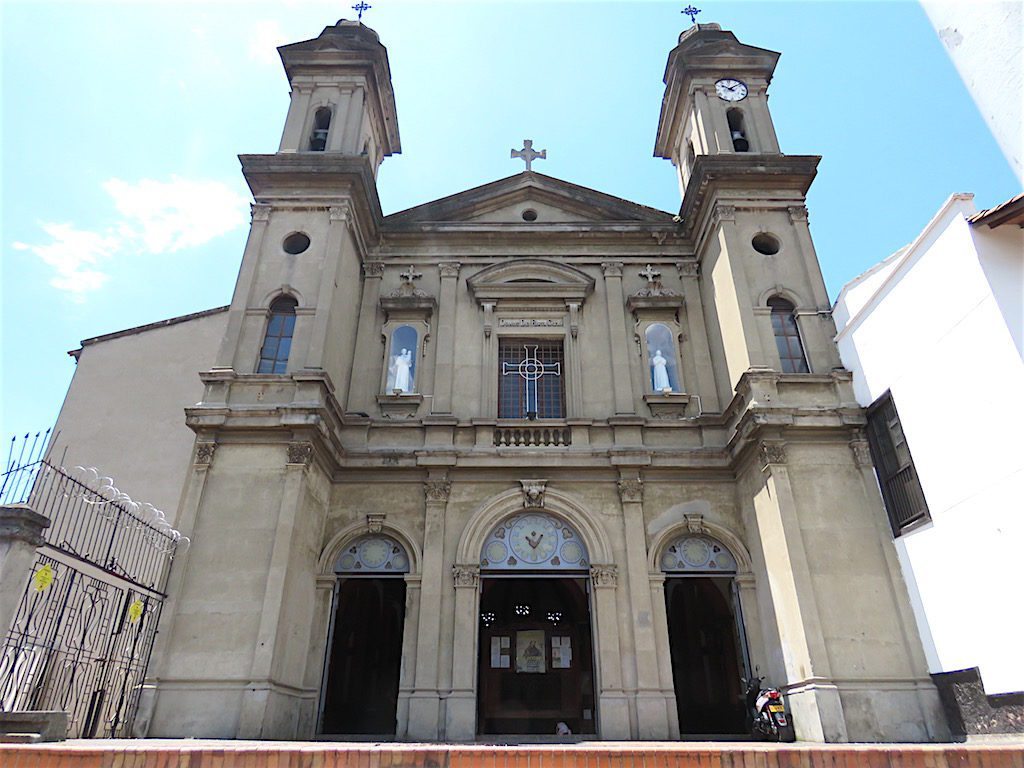 The facade of Iglesia San Antonio

How to Get to Iglesia San Antonio

In addition, the church is located about three blocks from the Alpujarra metro station on Line A. Also, just about any taxi driver in Medellín will know where Plaza San Antonio and Iglesia San Antionio are located.

Iglesia San Antonio isn’t open all the time. In my experience, it’s typically open in the mornings. But I saw no mass schedule posted in the church. So, we recommend calling before going to make sure it is open.

There is normally a noticeable police presence in Plaza San Antonio. However, take care as street crime is common in El Centro, particularly after dark. 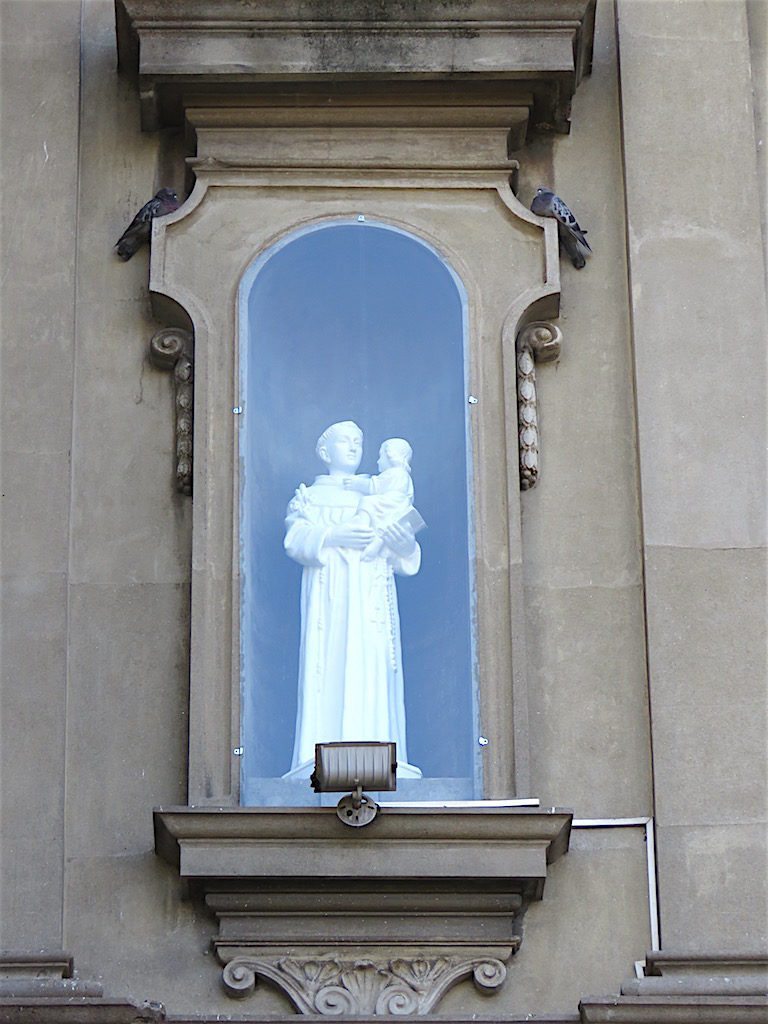 Iglesia San Antonio is found in only one out of 10 English language Colombia travel guidebooks I have. But it’s worth seeing this church as well as nearby Plaza San Antonio with its Botero sculptures including the bombed sculpture.

You could combine seeing Iglesia San Antonio and Plaza San Antonio while seeing other attractions in El Centro such as Plaza Botero and Museo de Antioquia.