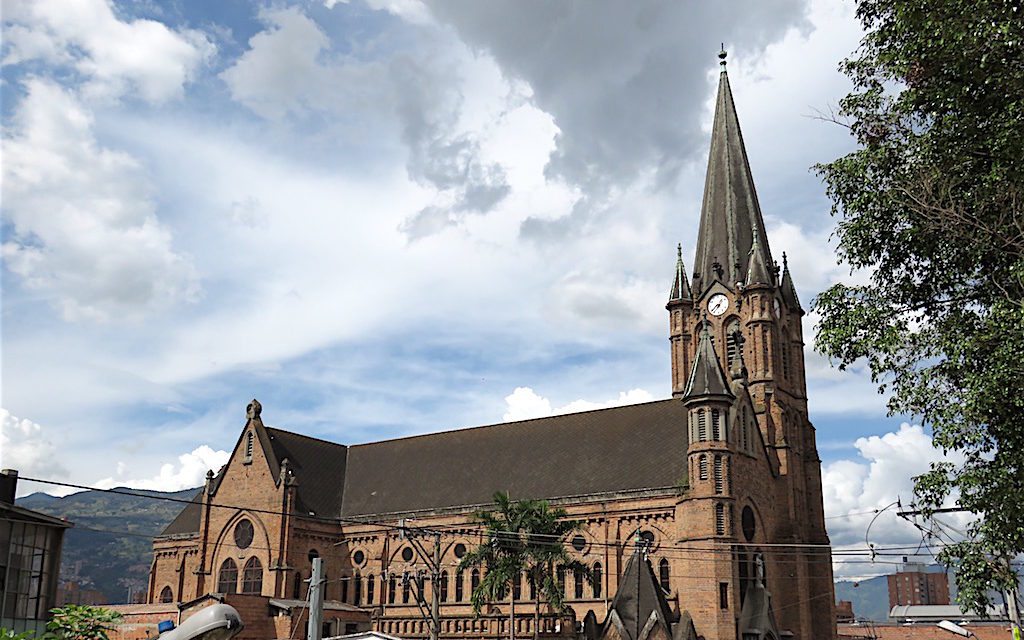 Iglesia del Sagrado Corazón de Jesús (Church of the Sacred Heart of Jesus) is a notable and historic Roman Catholic church located in Medellín, which is worth seeing – particularly if you like Neo-Gothic style architecture. This beautiful church has many stained-glass windows and other religious artwork. 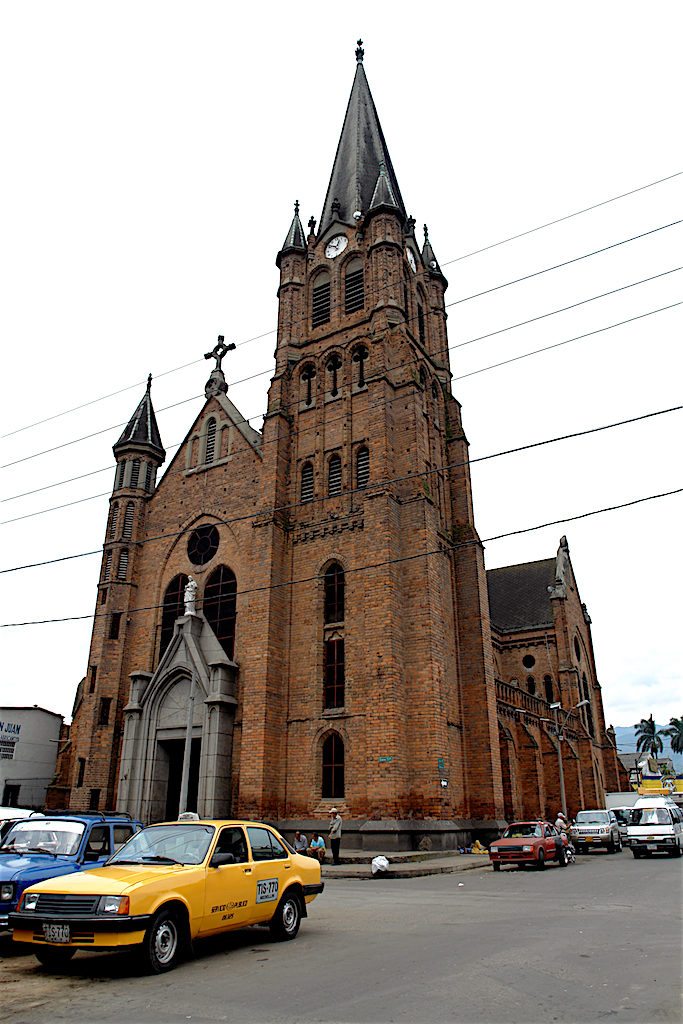 Land was donated by the Urban Development Company and the church was authorized by Archbishop Manuel José Cayzedo. So, construction of the large brick church started in November 1923 under the direction of Belgian architect Agustín Goovaerts.

In 1928, engineer Pepe (Jesús) Mejía, from the Belgian architecture firm Félix Mejía y Cia, took over the project as Goovaerts had returned home to Belgium. Finally, the church was completed in November 1941. And the parish for the church was created in January 1942.

A residential neighborhood never really developed around the new church. And today the area is mainly industrial near the church. Furthermore, near the church you will find many small auto repair shops, auto parts stores and several other shops, restaurants and local bars. 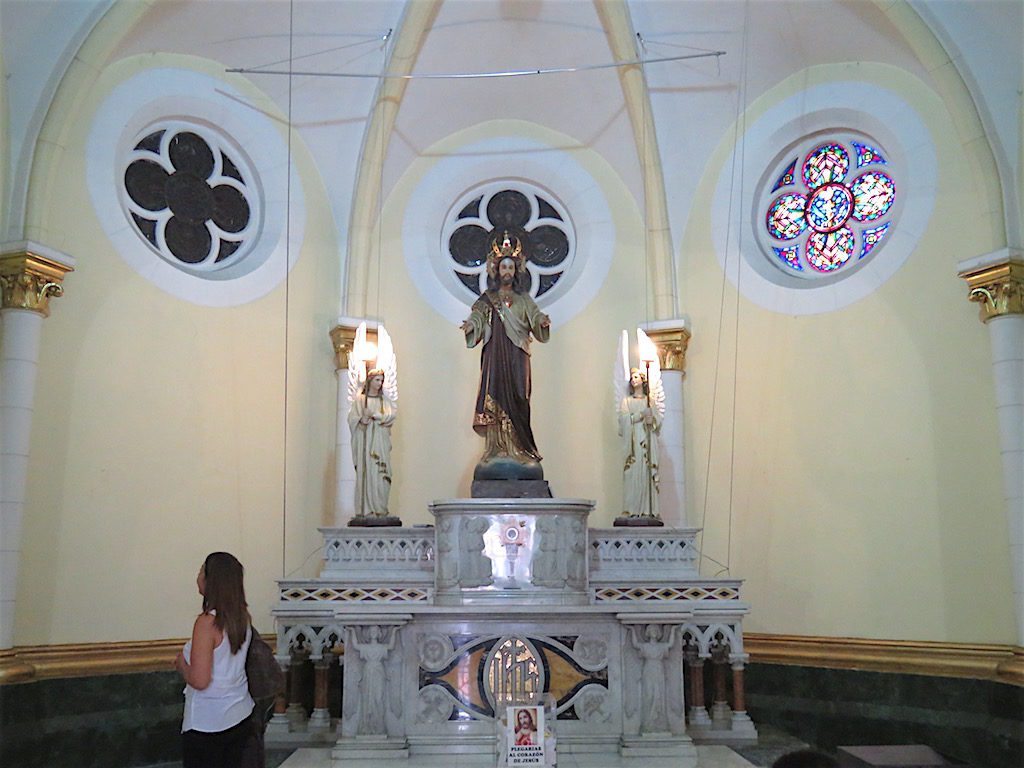 Inside the church on the left side

Church is a National Monument of Colombia

Iglesia del Sagrado Corazón de Jesús is a historic church in Medellín with a Neo-Gothic style that is different than many other churches in Colombia. Consequently, the church was declared a National Monument of Colombia on August 31, 1998.

National Monuments of Colombia (Monumentos Nacionales de Colombia) include buildings, nature reserves, archaeological sites, historic districts and urban areas that for values of authenticity, originality, aesthetics, and artistic techniques which are considered an expression of the Colombian nationality. 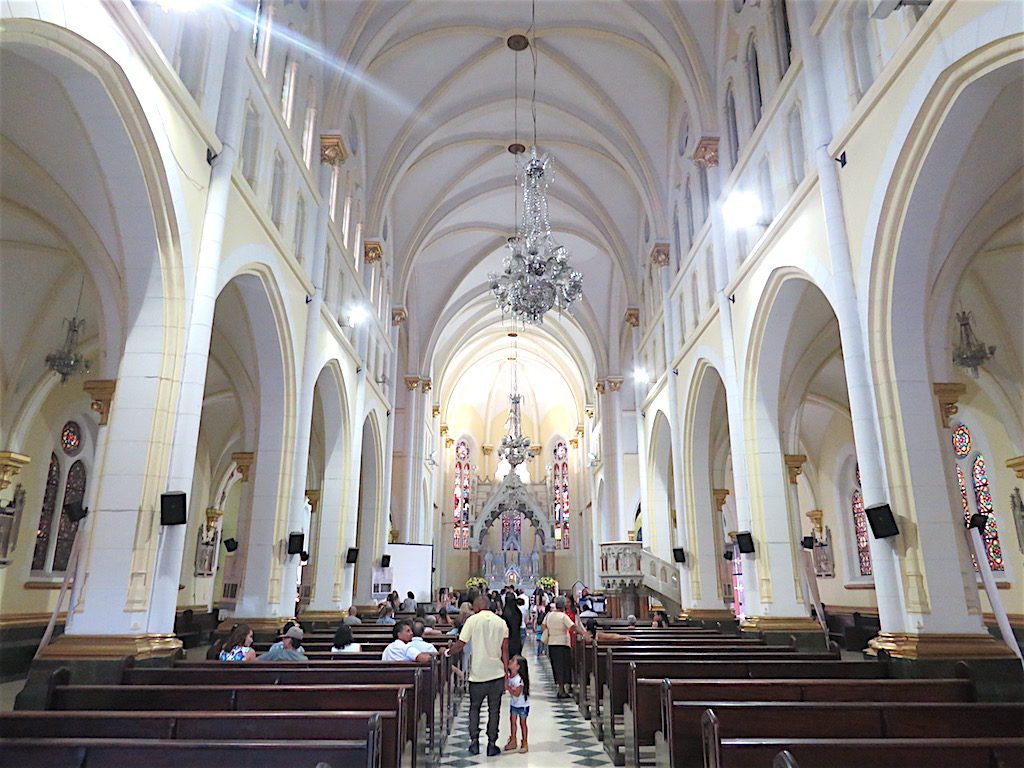 Inside Iglesia del Sagrado Corazón de Jesús you will find a beautiful interior that is white and yellow with gold trim. And it has wooden pews.

There are many pieces of religious artwork to be found throughout this church. In addition, the church has many stained-glass windows. 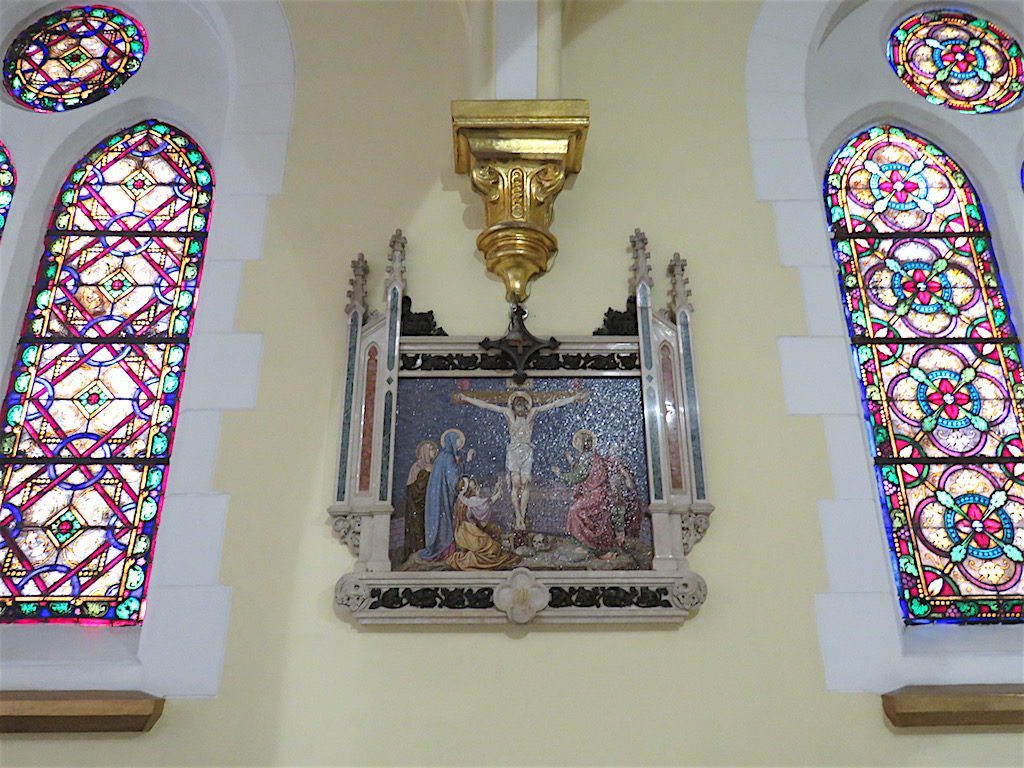 Artwork and stained-glass inside the church 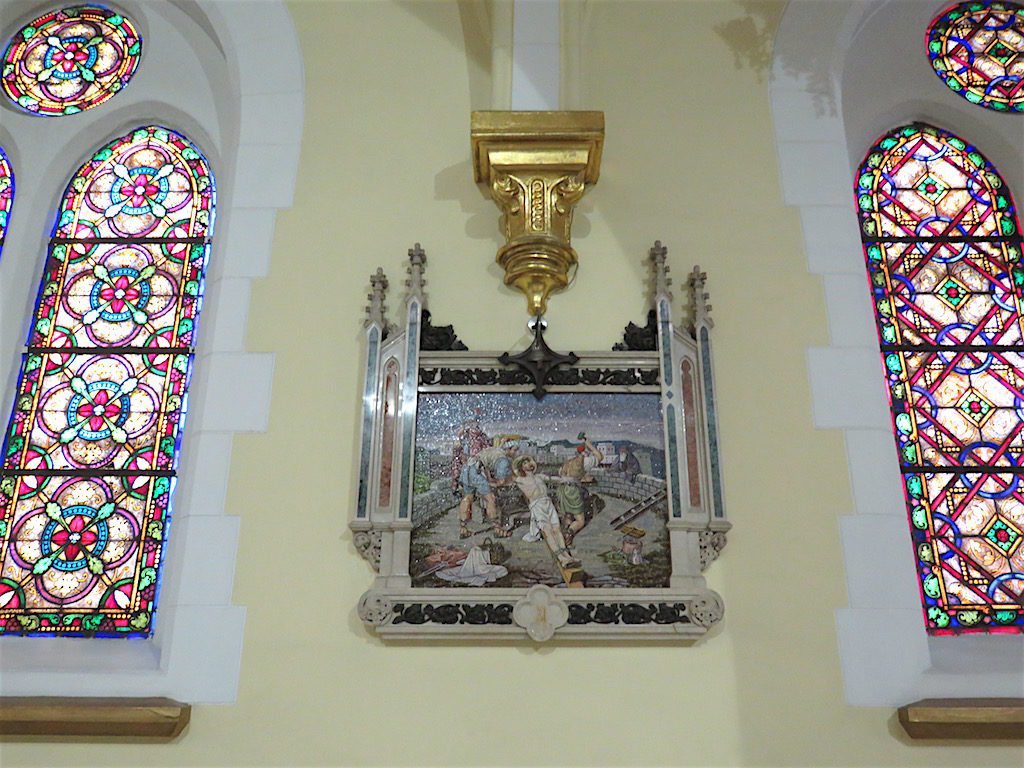 Additional artwork and stained-glass inside the church 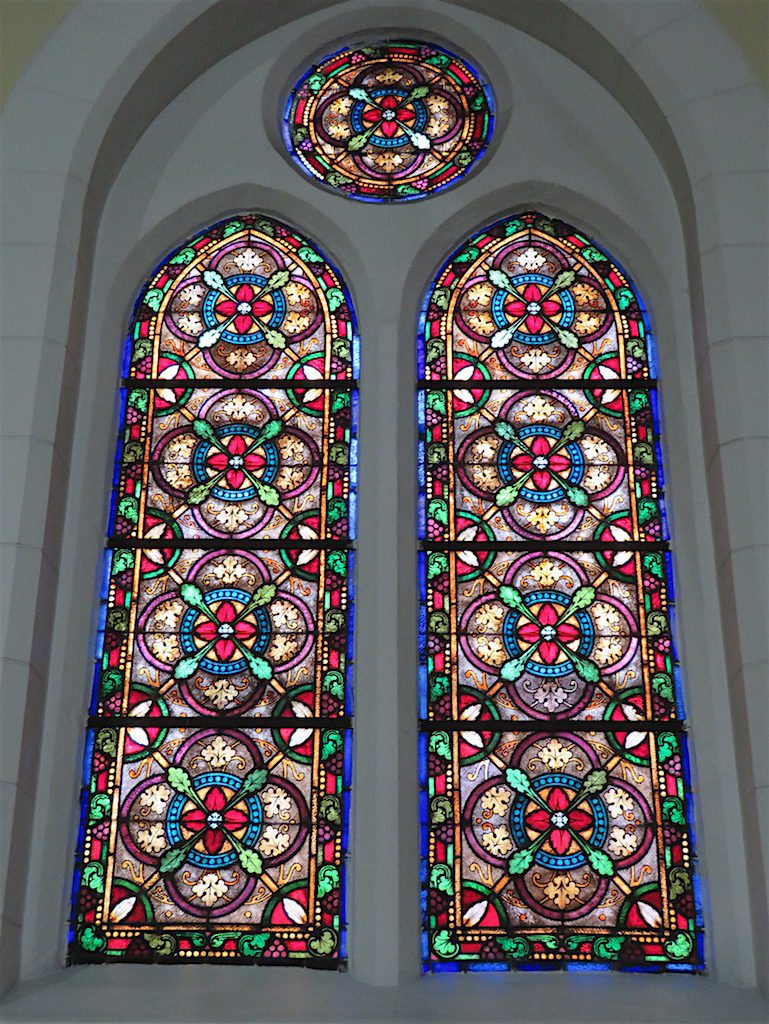 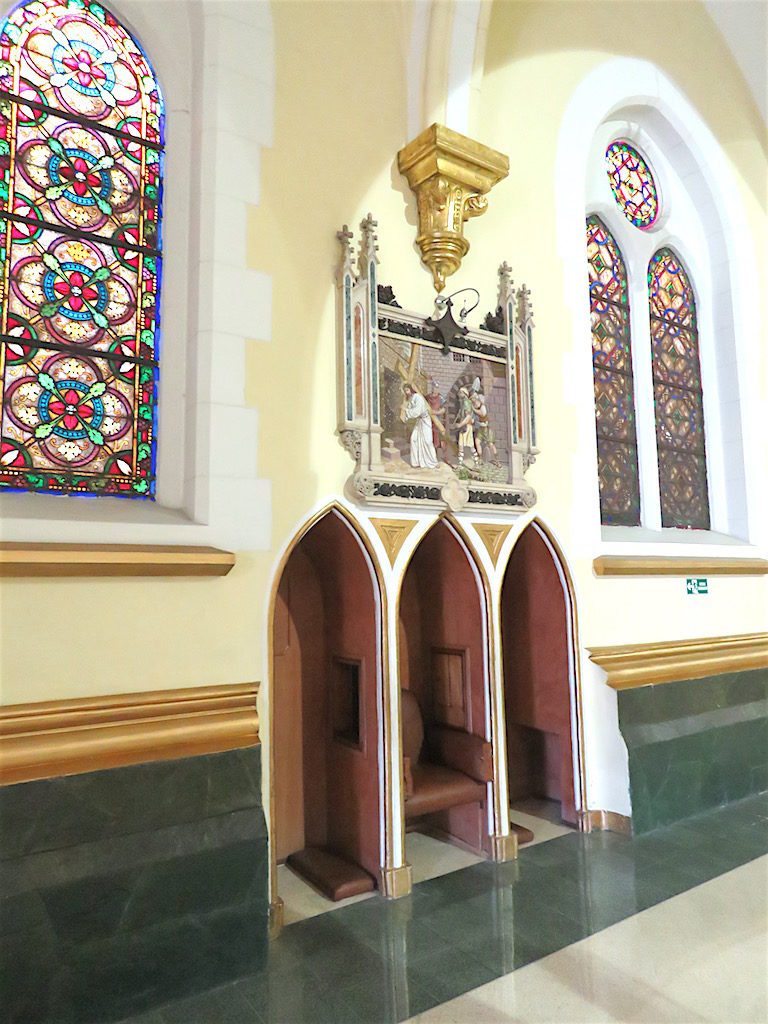 Confessionals on the left side of the church

Reportedly, the neighborhood received this name from a French man with the name of Tristan who opened a mechanics workshop in the neighborhood. But Colombians couldn’t pronounce “Tristan” correctly so they started calling the area “Triste”.

(The Rose Seller) by Colombian director Victor Gaviria. This film released in 1998 received a Golden Palm nomination at the Cannes Film Festival.

The film is a about a young 13-year old girl, Monica, who lives in glue-sniffing squalor in the streets of Medellín. Abandoned, she scrapes together money to feed her habit by selling roses to couples in bars.

Unfortunately, this neighborhood hasn’t changed from the time of this film. During the day, it is an active commercial area with many car repair and other industrial shops and many small restaurants. And at night the area becomes more dangerous with homeless people and drug sellers. So, it’s not a place to go after dark.

At night, Barrio Triste vacates. According to an article in the El Colombiano newspaper earlier this year, only 46 people actually live in barrio Corazón de Jesús, making it one of the least populated barrios in the city with only two inhabitants per square kilometer. So, the original goal of building Iglesia del Sagrado Corazón de Jesús to attract a residential neighborhood was definitely not successful.

How to Get to Iglesia del Sagrado Corazón de Jesús

Iglesia del Sagrado Corazón de Jesús is conveniently located only two blocks from the Cisneros metro station on Line B of the Medellín metro. Furthermore, you can see the church from the metro on the left side coming from San Antonio station going west.

The short two-block walk from the metro station to the church is an industrial area with many auto repair shops. Most noteworthy, around the Cisneros metro station it is considered to be fairly dangerous at night. But during the day with people around it is relatively safe.

Hours: The church is mainly open in the mornings each day until the early afternoon at about 2:00 pm. We recommend calling before going to make sure it is open. 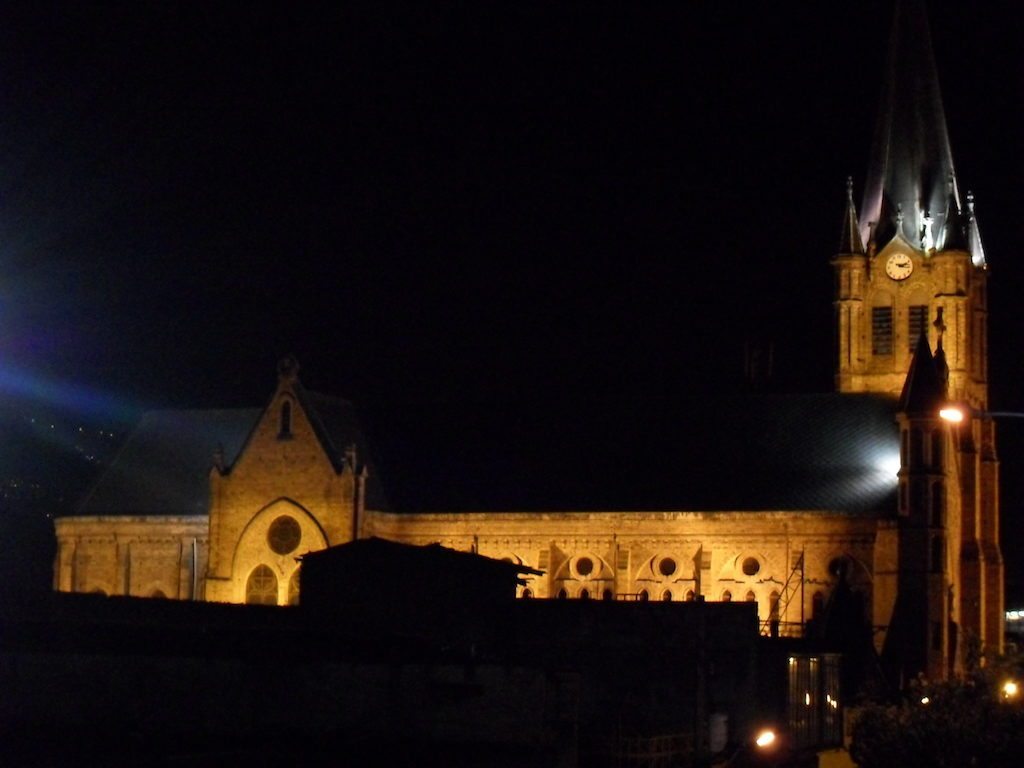 Iglesia del Sagrado Corazón de Jesús isn’t found in any of the 10 English language Colombia travel guidebooks that I have. But it’s worth seeing this Neo-Gothic-style church. And it’s easy to get to since the church is only about two blocks from the Cisneros metro station. 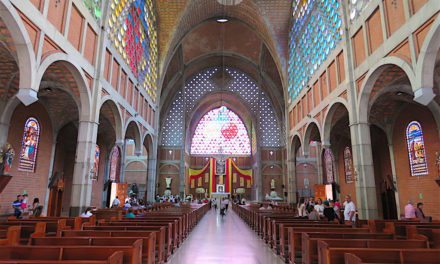 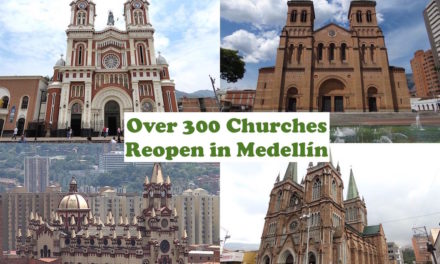