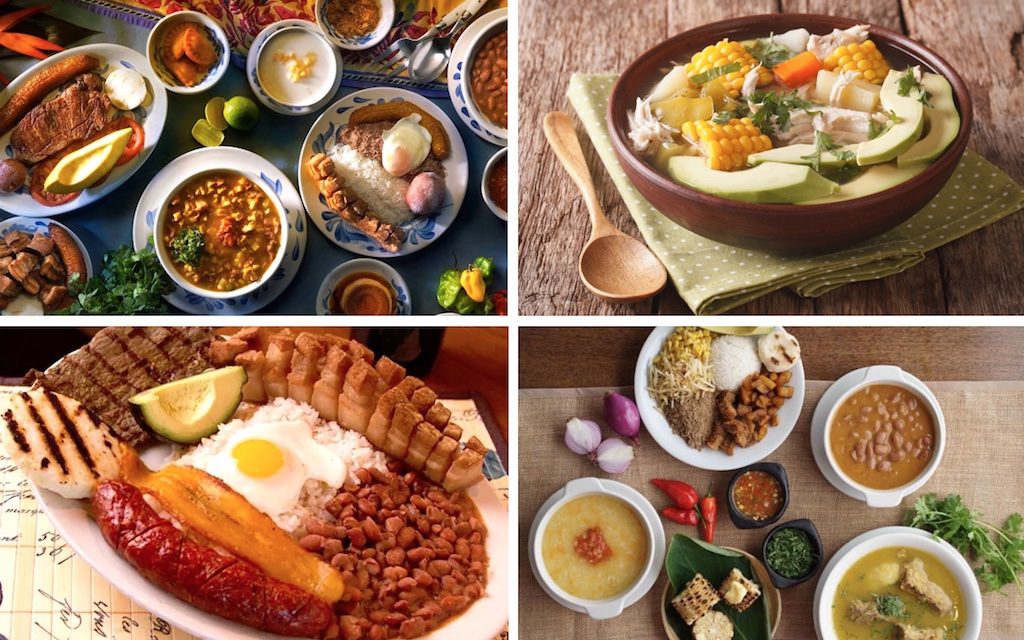 Colombian cuisine varies regionally and is influenced by Spanish, African, Arab and some Asian cuisines.

We previously looked at 30 exotic tropical fruits of Colombia and 9 Colombian street food options you should try. Also, we looked at 15 traditional Colombian food dishes worth trying.

The following list of the best Colombian restaurants in Medellín and the Aburrá Valley was created with the help of my Colombian wife. 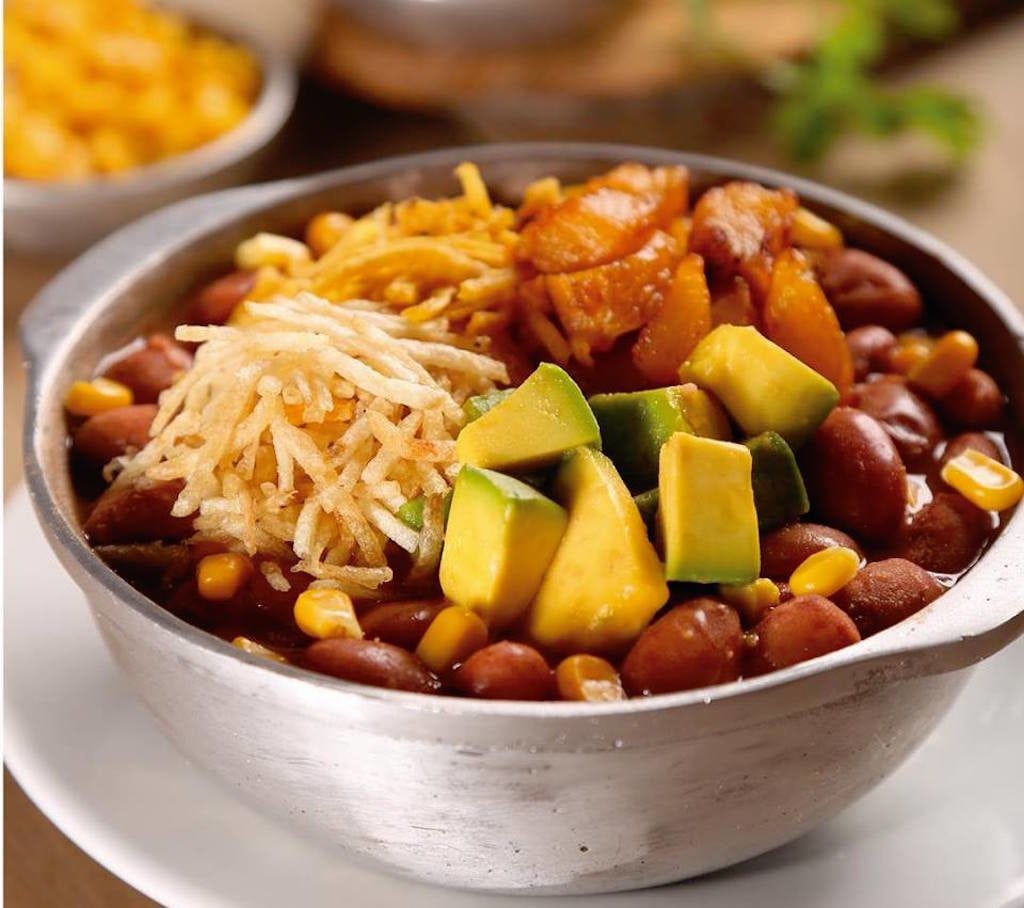 El Rancherito is a very popular chain of restaurants with nine locations in Medellín and nearby. This chain serves good comida típica – traditional Colombian dishes.

Reportedly El Rancherito is the biggest restaurant chain serving traditional Colombian food in the Antioquia region. El Rancherito restaurants will normally be packed with Colombian families. And they tend to have a nice relaxed atmosphere and will sometimes even have live music in the evenings.

In addition, you can find most of the 15 traditional Colombian dishes we previously looked at on the menu at El Rancherito.

The history of El Rancherito goes back to June 1975, when one of the founders reportedly dreamed she was building a small ranch to sell fritters, empanadas, chicken cakes and hot chocolate.

So, with her husband they began to shape that dream and started with a wood stove cooking food typical of the Antioquenos. Cars started to line up for this cooking. And this was the beginning of the first El Rancherito restaurant that opened in 1975 in Amagá, which is located south of Medellín.

Since that time, the chain has continued to expand where El Rancherito now has nine restaurants in Medellín and the nearby municipalities. Also, they have a restaurant in Pereira.

El Rancherito has a huge menu of over 25 pages. It specializes in comida típica – traditional Colombian dishes.

El Rancherito has nine restaurants in Medellín and nearby: 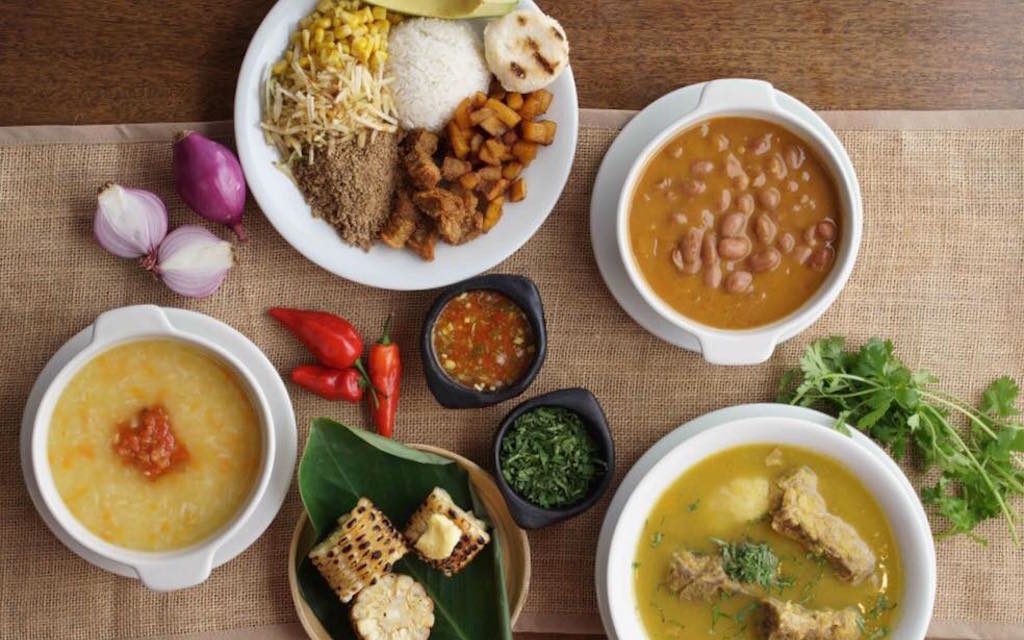 Some of the food available at Hacienda, photo courtesy of Hacienda

Hacienda restaurants are quite popular with local Colombians and some tourists. And the restaurants have a nice relaxed atmosphere.

Hacienda was founded in 1991 in the heart of El Centro in Medellín on Carrera 49 (Junín). It is located on the second floor with a quiet balcony overlooking the busy pedestrian street below.

The goal of Hacienda was to create a place where you could experience the Antioqueña culture, rescuing its values and traditions, through good service, music and good food.

The Junín location in El Centro is the chain’s original restaurant. And this is where all its recipes were created years ago by housewives from Antioquia. These housewives carefully selected the best ingredients and in their proper quantities with a goal to offer best comida típica from Medellin.

Since opening that first location in 1991, Hacienda expanded to where it now has six restaurants in Medellín.  This restaurant chain specializes in comida típica – traditional Colombian dishes.

On the menu you’ll find 14 traditional Colombian dishes including Bandeja Paisa, Mondongo soup, Sancocho soup and several more. And the Bandeja Paisa, which is called Bandeja Hacienda is priced at 30,900 pesos or 15,900 pesos for a mini Bandeja Paiasa.

Hacienda has six restaurant locations in the Medellín area listed below:

Hours: Noon to 9 pm (except the El Centro location, which closes earlier at 8 pm). 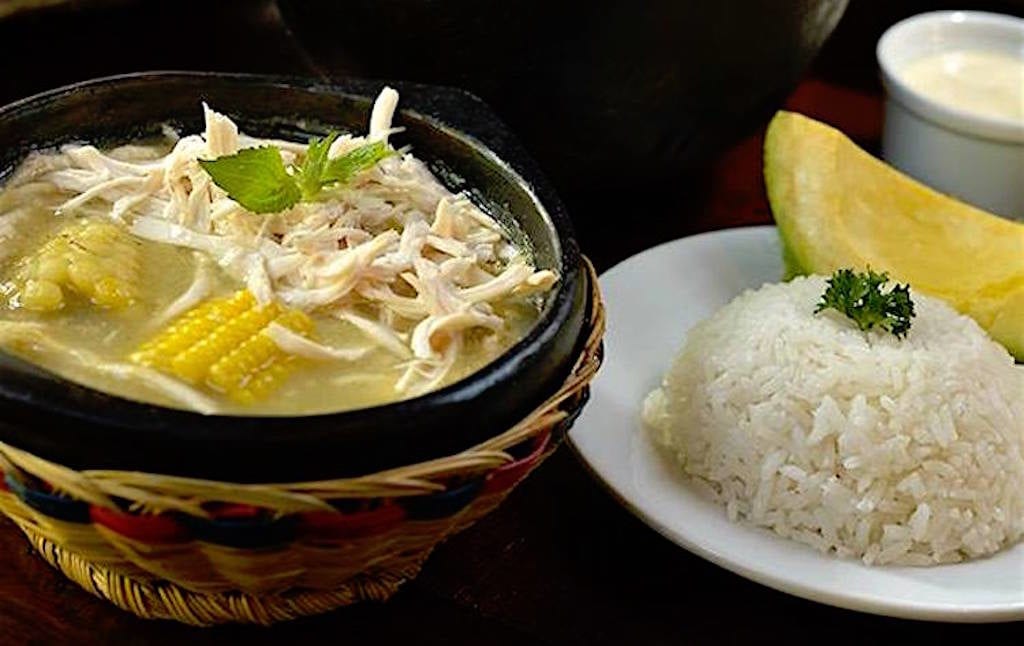 Hato Viejo restaurants are popular. And they tend to have a nice relaxed atmosphere plus at some locations live music on Friday and Saturday nights.

This restaurant chain is known for its Colombian cuisine with a menu including salads, soups, casseroles, Colombian desserts, a varied selection of wines and spirits and a series of contemporary dishes that include various flavors of Colombia.

Hato Viejo has four restaurant locations in the Medellín area: 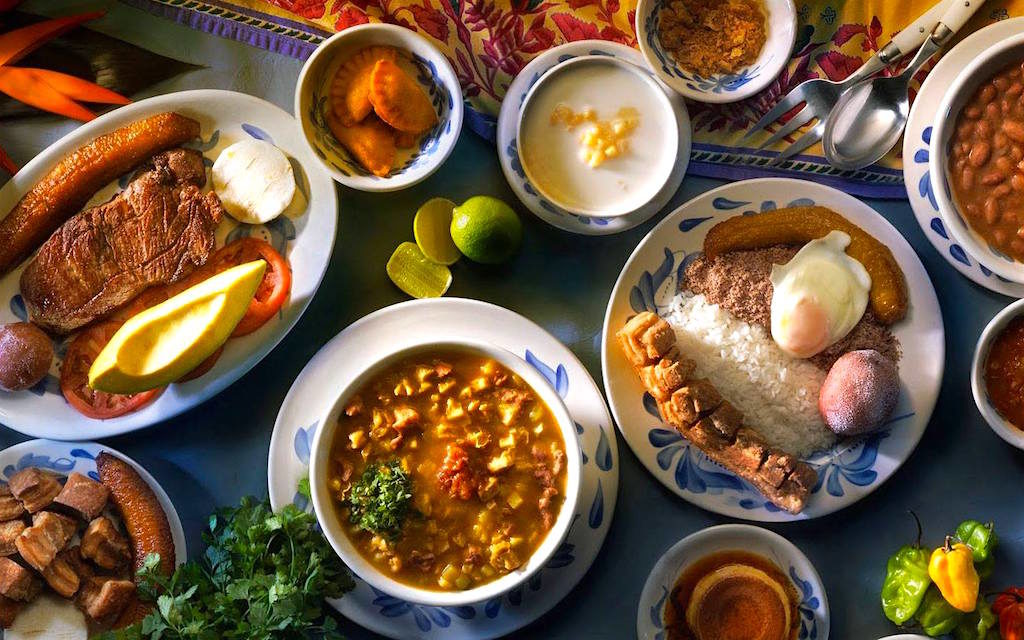 Some of the Colombian food options at Mondongo’s, photo courtesy of Mondongo’s

Mondongo’s is very popular with local Colombians and some tourists. And the restaurants have a relaxed atmosphere. In addition, this restaurant chain is named after Mondongo soup, which is a traditional Paisa dish.

Mondongo soup is made from diced tripe (the stomach of a cow), which is slow-cooked with chicken or beef stock, cilantro, and many vegetables such as peas, carrots and onions. Mondongo a hearty dish and is sometimes the soup course in a traditional almuerzo (lunch) meal in Colombia.

In October 1976, the idea of ​​creating a small and cozy restaurant on Avenida San Juan, which was named Mondongo’s, materialized.

The founders conceived the idea of ​​a unique restaurant, aimed especially at bringing together Antioquia families around a very Paisa dish – the Mondongo soup – which the restaurant was named for. And the restaurant quickly became very popular.

After several years, the initial restaurant moved to a larger location on Carrera 70 in Laureles, where it is currently located. In March 1995, a second location opened in Medellín on Calle 10 in El Poblado. And at the request of Colombians living in Miami in the U.S., a third restaurant was opened in Miami in December 2001.

Mondongo’s has two restaurant locations in the Medellín area:

In addition, Mondongo’s has a location in Miami, Florida located at 3500 NW 87 Avenue. 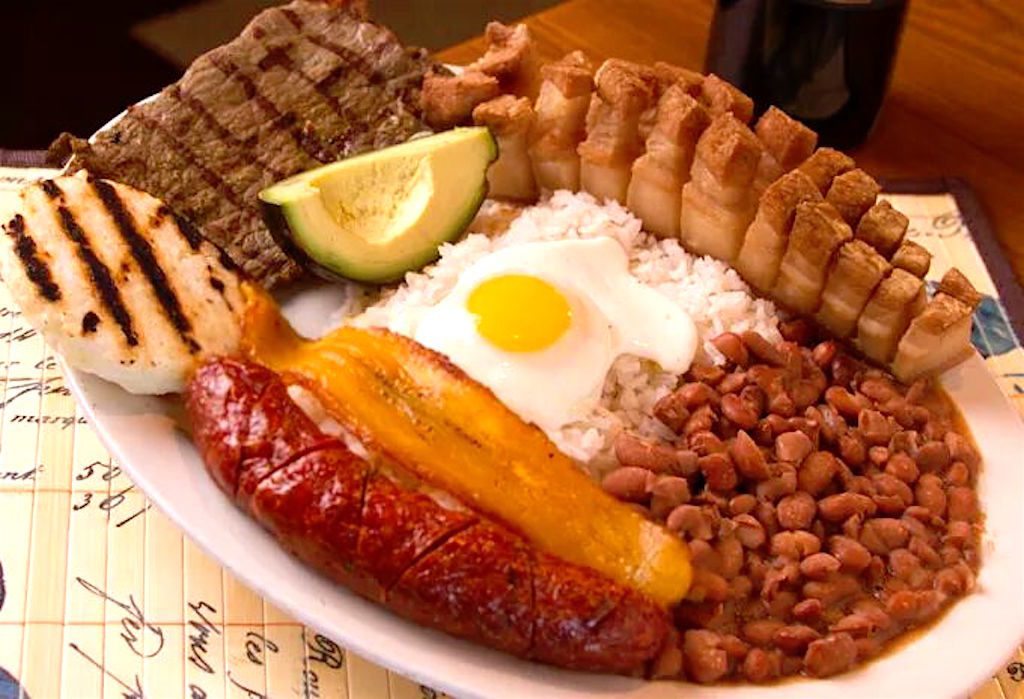 El Viejo John is a very popular restaurant in Sabaneta that specializes in traditional Colombian food. It’s a great place to experience Colombian food including Antioquian specialties like bandeja paisa.

The portions at El Viejo John are huge and the prices are reasonable. I frequently have needed to ask them to pack some of the leftovers to take home, as it has been too much to eat.

Many of the staff working at El Viejo John are long-term employees. Also, the décor of the restaurant is quite rustic and is consistent with paisa traditions. In addition, El Viejo John is located next to Parque Sabaneta, which is arguably the nicest park in the Medellin and Aburrá Valley metro area.

Restaurante El Viejo John has a big menu with chicken, meats, fish, bandejas, sancochos and many other types of typical Colombian and Antioquian cuisine. 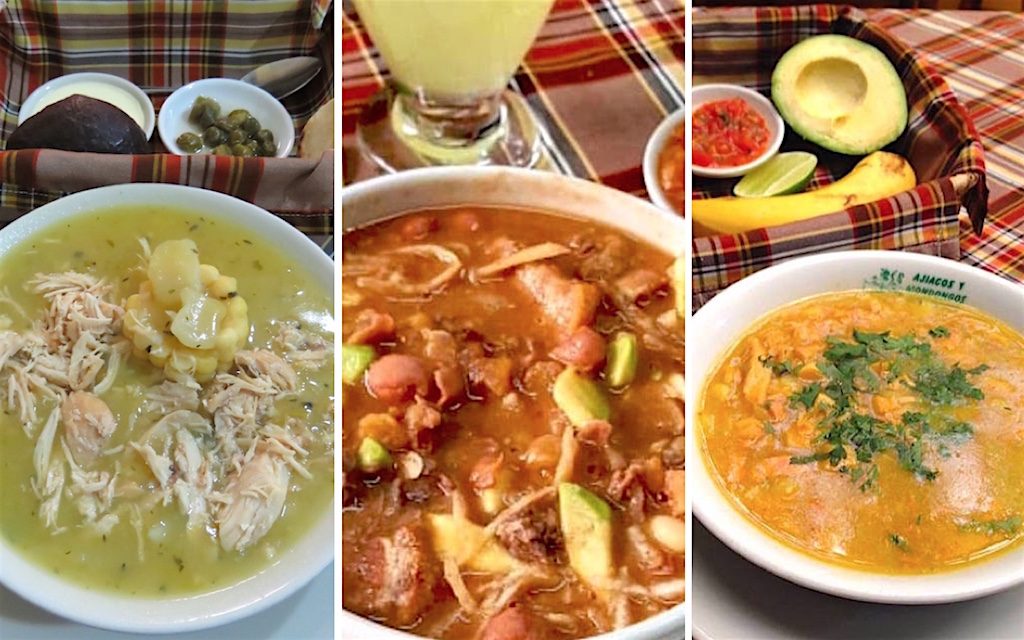 Ajiacos y Mondongos has been open for nearly 30 years. And it’s only open for lunch and is a popular lunch place in El Poblado in Medellin.

This restaurant is popular with locals and some foreigners due to having some very good Colombian food. I have eaten at this restaurant many times and the food and service has always been very good.

Ajiacos y Mondongos originally opened in 1991 with the goal to make customers feel like they are visiting a Colombian home with recipes that have lasted for generations along with pleasant and cordial service.

Being true to its roots, this restaurant has a simple menu with only three traditional Colombian dishes – a Ajiaco soup, Mondongo soup and Cazuela de frijoles. All three Colombian dishes cost 24,500 pesos or 19,500 pesos for a half-order.

Each dish is made with fresh ingredients and a number of products used are reportedly grown by the restaurant. 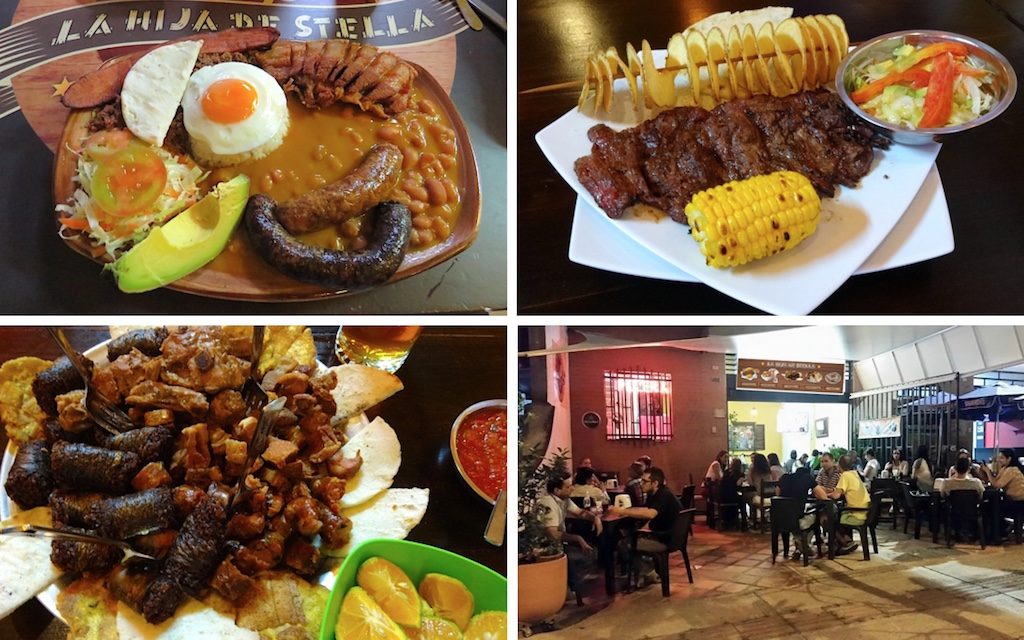 Some of the food options at La Hija de Stella

La Hija de Stella is Spanish for “Stella’s Daughter”. This restaurant is popular with locals in Sabaneta and a few foreigners that have discovered it due to having some very good Colombian food.

La Hija de Stella has several Colombian dishes on the menu with prices ranging from 16,000 to 36,000 pesos. The Bandeja Paisa here costs 26,000 pesos. 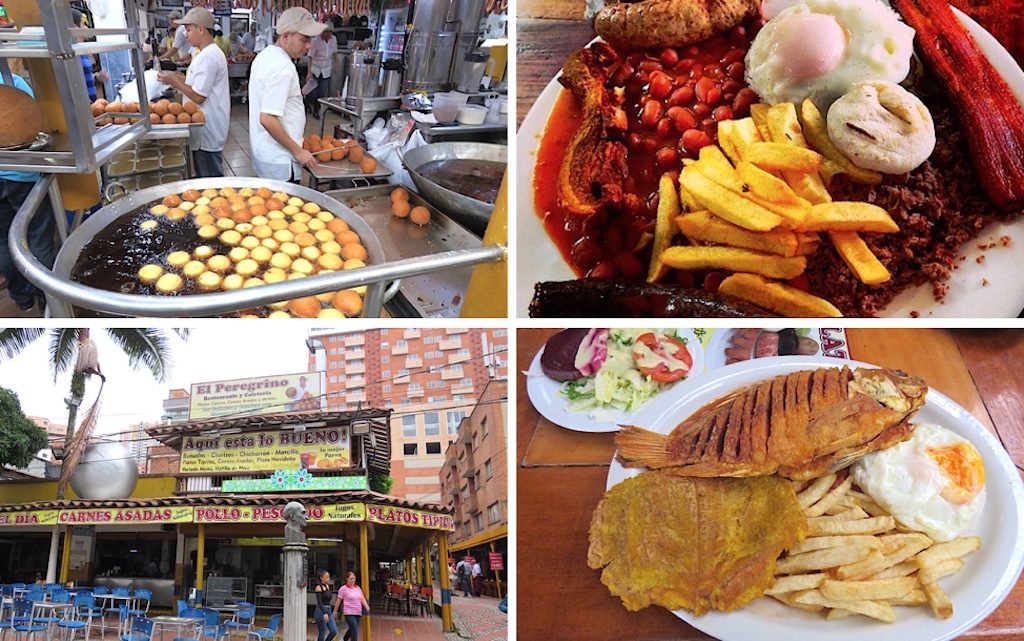 The El Peregrino restaurant has been in operation for nearly 30 years and is famous for its large buñuelos. But this popular restaurant is open for breakfast, lunch and dinner and also has a nice selection of traditional Colombian dishes.

This is a large restaurant located next to Parque Sabaneta with both indoor and outdoor seating options.

The buñuelos at El Peregrino are famous and are sized at 200 grams. And they are made from a recipe brought by Pedro José Vásquez from the pueblo San José de la Montaña about five decades ago.

Vásquez’s son Pedro Vásquez Pino is the founder and owner of El Peregrino. His grandmother provided a very specific recipe to made the buñuelos, which require very fresh and high-quality ingredients.

El Peregrino has several Colombian dishes on the menu with prices ranging from 17,000 to 38,000 pesos. The Bandeja Paisa here costs 26,000 pesos.

The Best of Medellín

Also, we have several additional best of Medellín articles:

What is your favorite Colombian restaurant in Medellín?

Editors note: updated on February 12, 2021 to remove Barcal, which has closed and reordered the list and updated information. 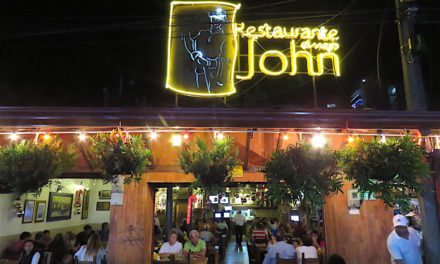 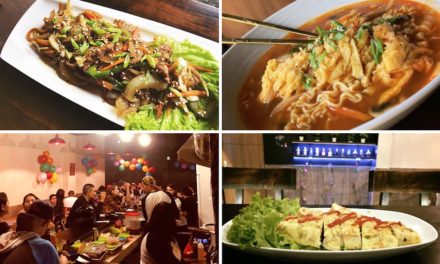 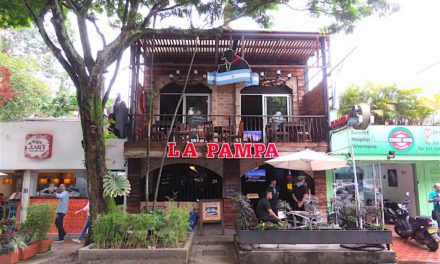 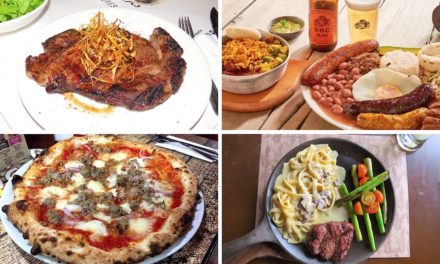