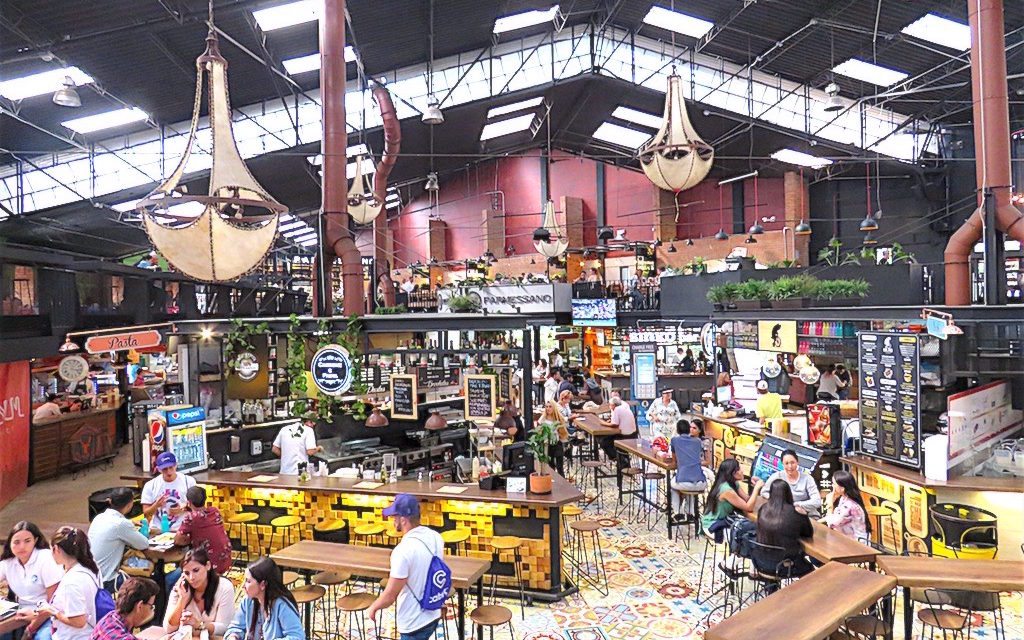 Mercado Del Rio is a large gastronomic market in Medellín, which has a collection of over 50 trendy restaurants in a sizable warehouse space located next to the Bancolombia Headquarters building.

There are also several bars, a coffee bistro and desserts at several kiosks on the first floor. And on the second floor are located a couple sit-down restaurants along with the Sinko Market, which is a bar that serves food. There are also plenty of TVs, which show the local football (soccer) games when playing.

At this gastronomic market, food is purchased at the small format restaurants and eaten at the many bar-height tables, which are cleaned quickly and efficiently by staff. They also have free Wifi.

It’s open for breakfast, lunch and dinner each day. It’s an outstanding place to have lunch or dinner and hang out with friends. It has a good atmosphere and a very wide variety of food and drinks as well as desserts. And it’s also a good place to take out-of-town guests. 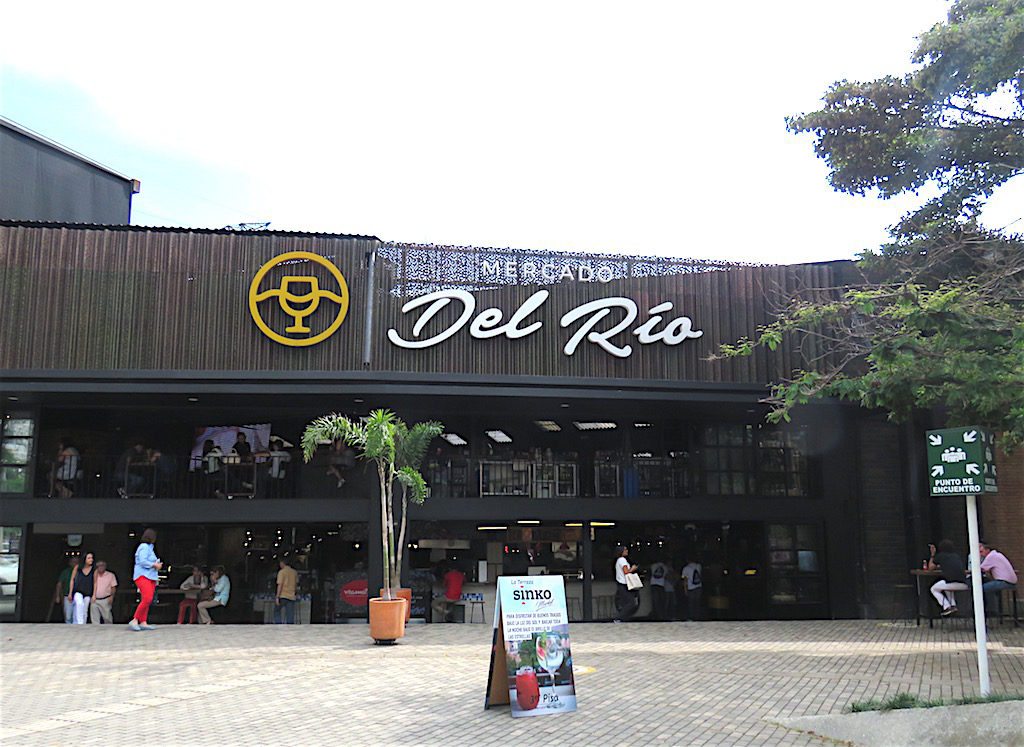 The front of Mercado Del Rio

Planning for this large gastronomic market in Medellín reportedly started about six years ago. The large warehouse building was previously being used to store lights for Medellín’s famous El Alumbrado Christmas lights prior to becoming Mercado del Rio.

Construction started in January 2016 and Mercado Del Rio opened its doors on October 25, 2016. Armada S.A.S, the company behind Medellín’s large gastronomic market, claims they modeled their idea after food markets in other parts of the world like Chelsea Market in New York, the Borough Market in London and Mercados Roma in Mexico.

Armanda is a real estate development company with more than 20 years of experience in developing commercial and mixed-use buildings. 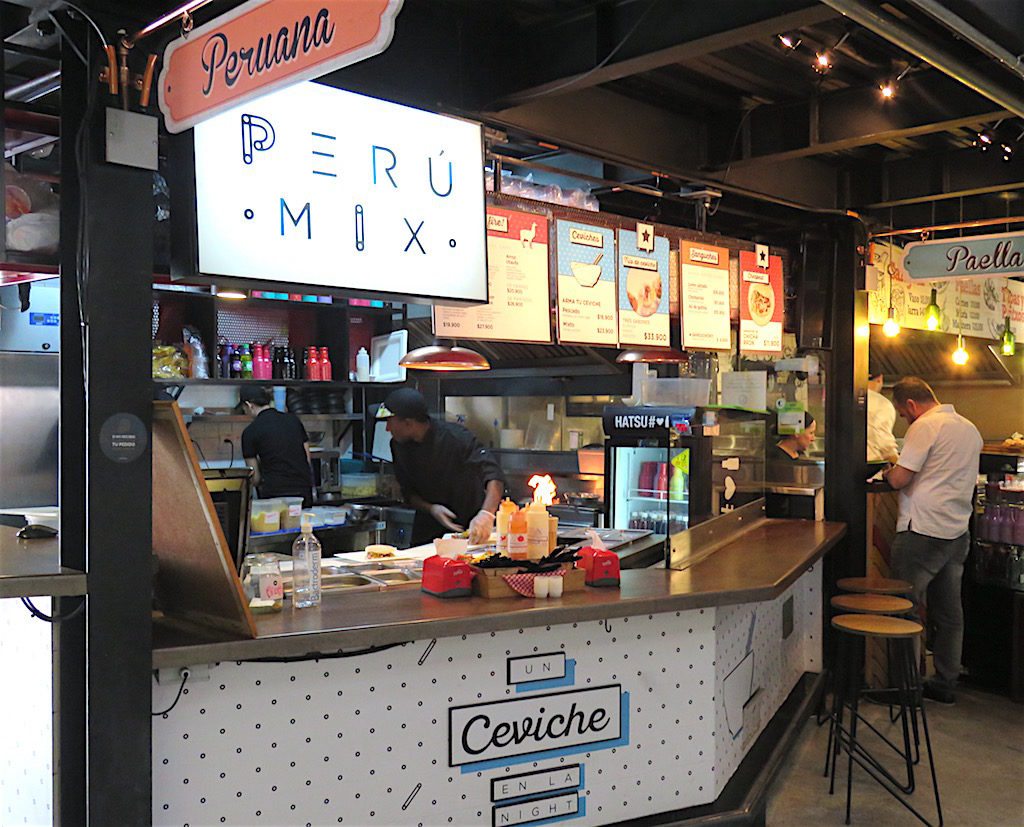 There is a range of prices for meals at the restaurants in this food market from about 15,000 to over 40,000 pesos. A few places also have “menú del día” lunch specials. 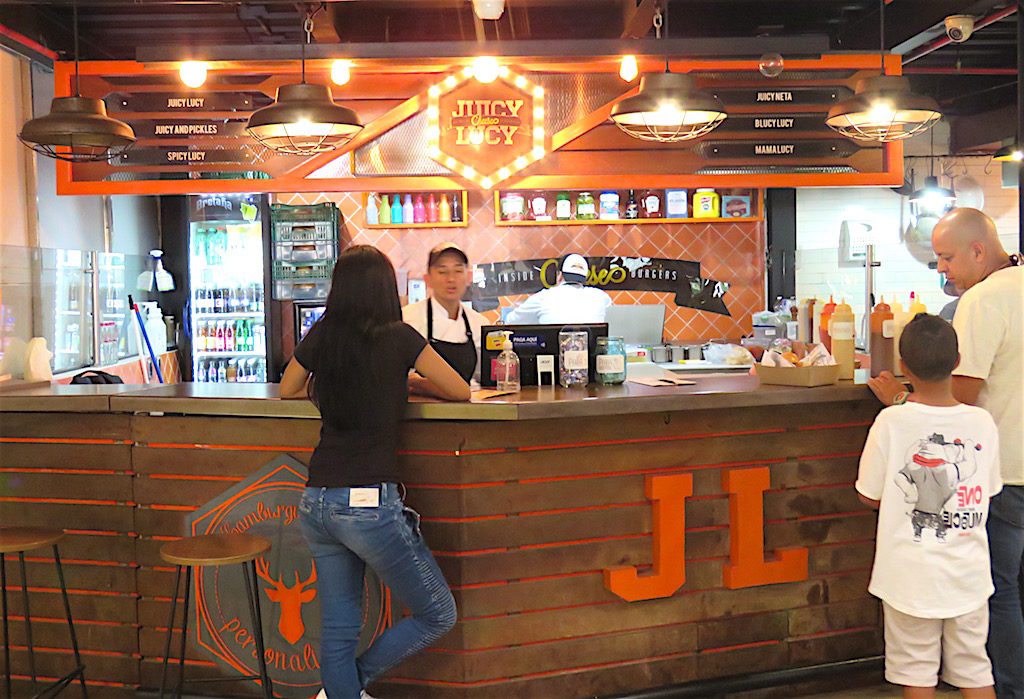 My Experiences at Mercado Del Rio

I have been to Mercado Del Rio over 10 times since it opened and I had good food from several of the restaurants. The first time I went I was impressed by the huge variety. But I was in a rush at lunch and had a great burger at Juicy Lucy.

Juicy Lucy is a chain with three locations in Medellín. They have 14 different burgers on the menu with prices ranging from 17,900 to 24,900 pesos.  The price includes a side of French fries, onion rings or fried yucca. I like their Juicy Lucy burger, which is a beef hamburger cooked to order with cheddar cheese, bacon, onion rings, tomatoes, mayonnaise, lettuce and barbecue sauce. 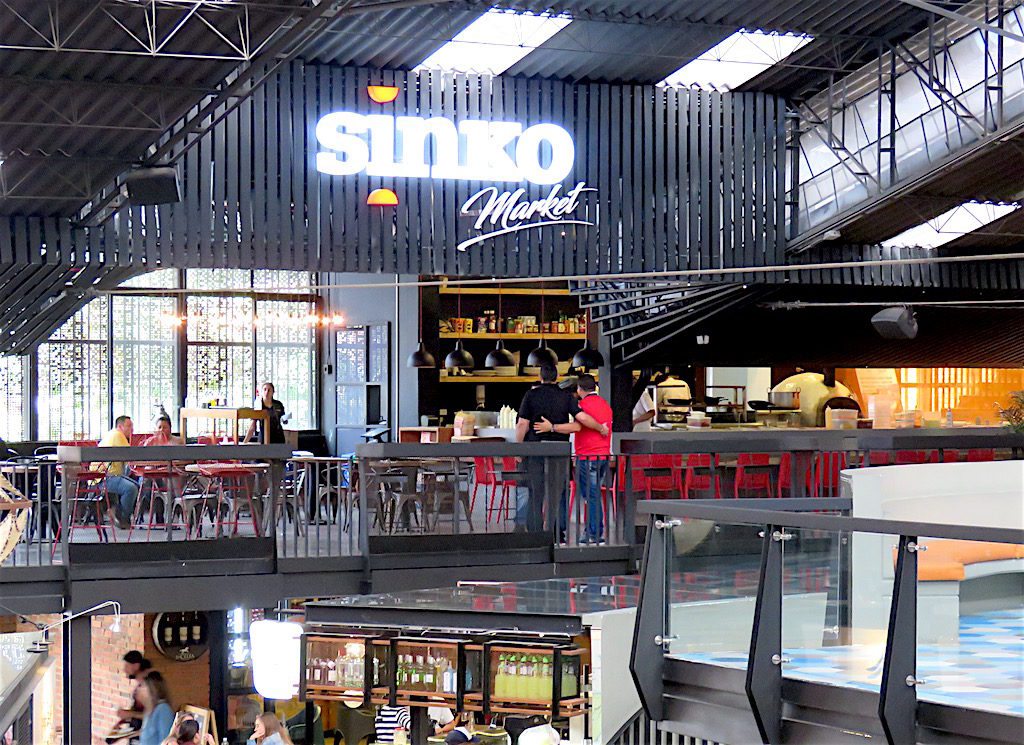 At this food market I also have eaten good Peruvian food from Peru Mix, phenomenal rotisserie chicken from Le Coq, good Italian food at Carbone e Pasta, good chicken wings from Hotwings Express and good seafood at Vitamar. In addition, I had good cocktails at Sinko Market on the second floor and several good bottles of wine from Enoteca del Rio on the first floor. 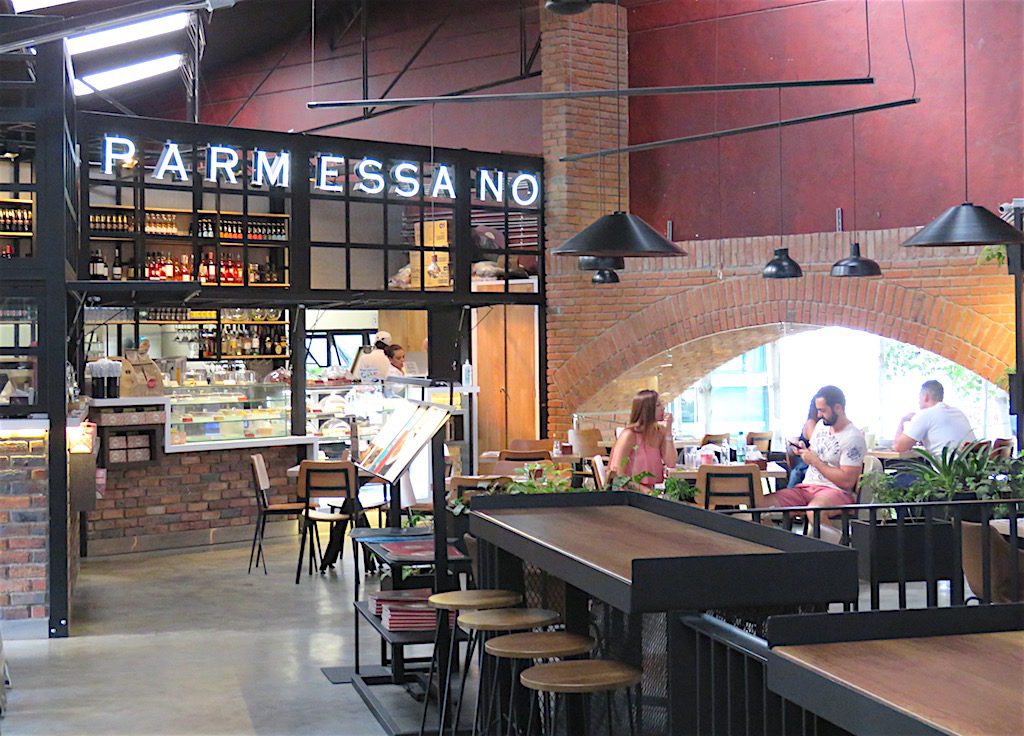 My most recent trip to this food market I ate at Parmessano. Parmessano is a popular chain of Italian restaurants in Medellín with nine locations that I have gone to for several years. Parmessano has an extensive menu with several pastas which choice of sauces, combo plates, sandwiches, soups, salads, house specials, appetizers and desserts.

They have many different types of pasta to choose from including spaghetti, fettuccine, ravioli and tortellini. The pastas range in price from 13,900 pesos for a half order to 19,500 pesos for the highest priced full order. I also like Parmessano’s beef lasagna that costs 21,300 pesos. 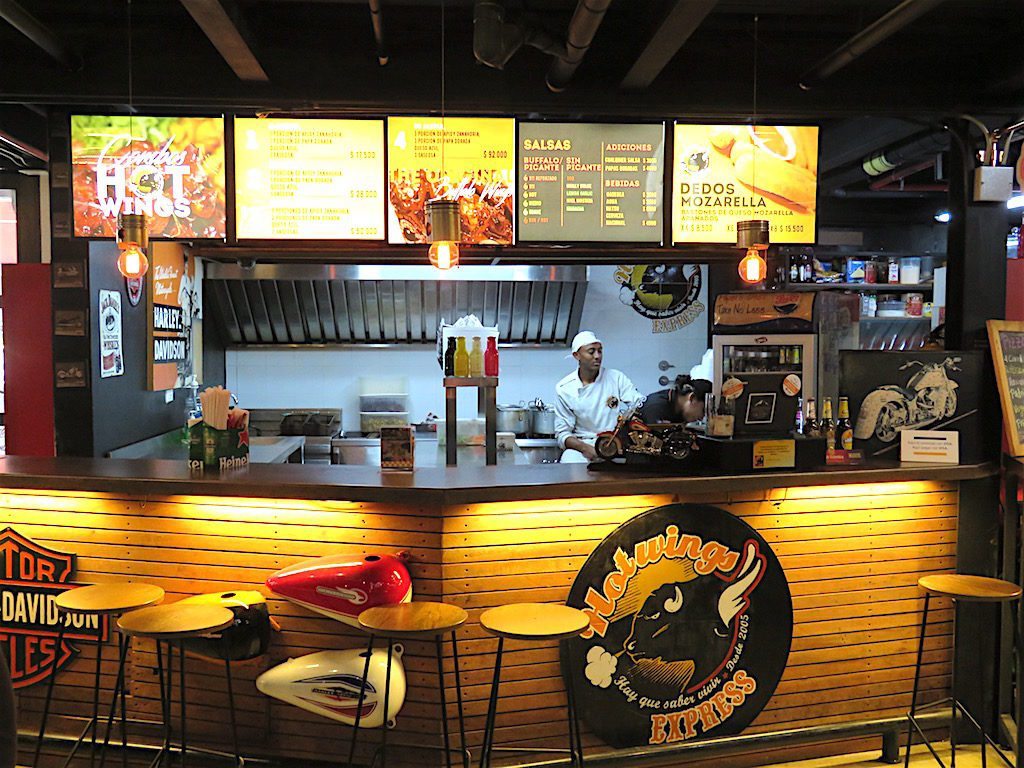 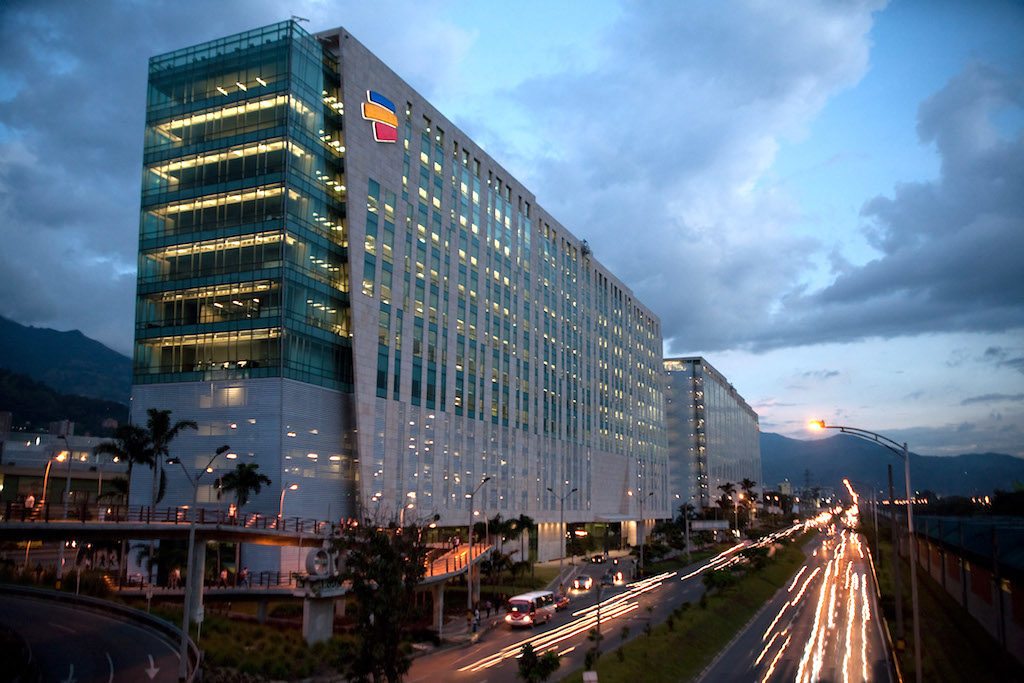 How to Get to Mercado Del Rio

Mercado Del Rio is located directly south of the large Bancolombia Headquarters building, which is located next to the Industriales metro station on Line A.

In my experience, it’s only about a seven-minute walk from the Industriales metro station. This food market has parking available but not enough parking spaces. I wouldn’t recommend parking, as they can run out of spaces on busy days. And parking is fairly expensive for Medellín at 10,000 pesos. So take the metro or a taxi.

Hours: 7 am to 9 pm, opens at 8 am on Sunday and can stay open later on the weekends 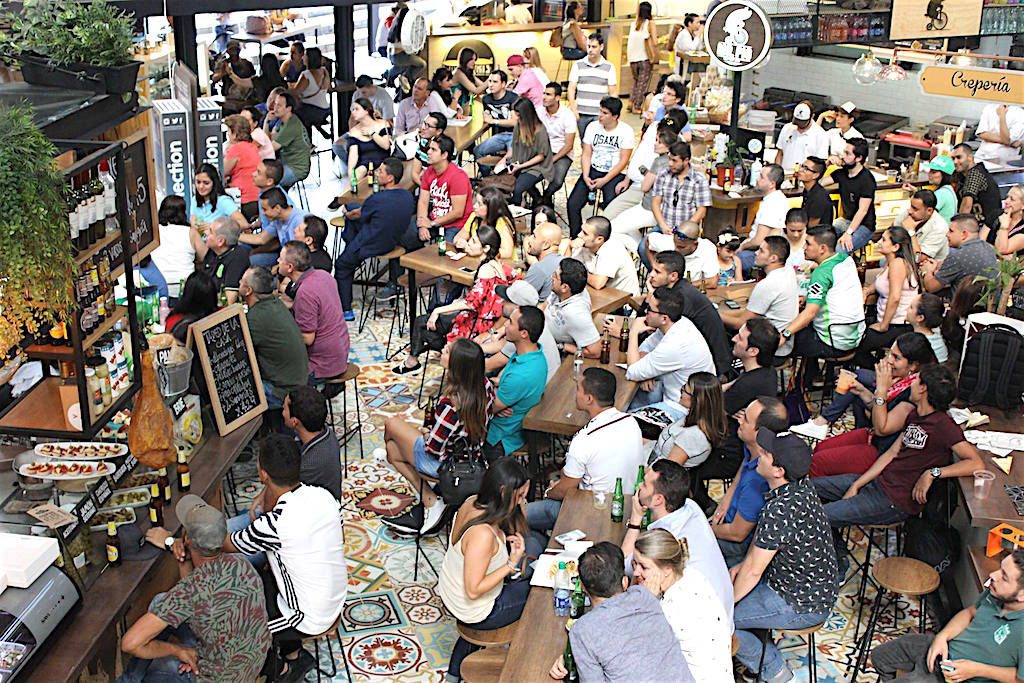 Mercado Del Rio has been open since October 2016. And in that time, it has become a very popular location for lunch and dinner and also is popular on the weekends.

It’s particularly popular for lunch during the week with the huge Bancolombia Headquarters building next door. In addition, there are many apartments nearby in Ciudad del Rio. So, sometimes it can be hard to find a place to sit with the lunch and weekend crowds.

But it’s a unique place in Medellín that is definitely worth going to. And if you go with a big group everyone can get food from whichever restaurant they want and still sit together.

Also, we included Mercado Del Rio in our list of 35 top things to do in Medellín. 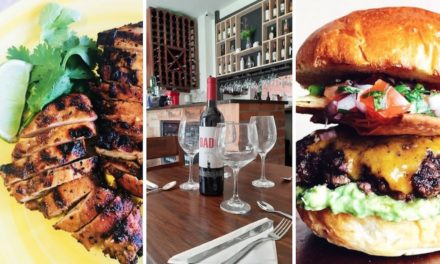 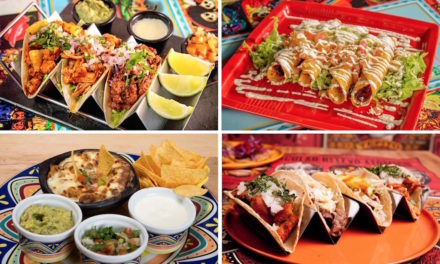 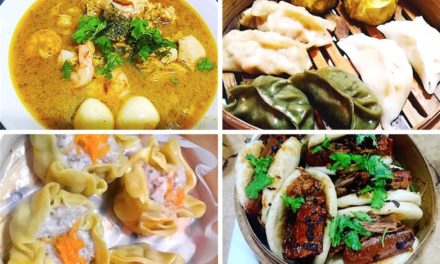 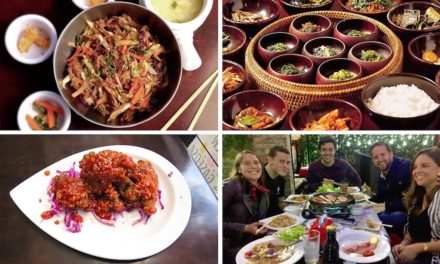