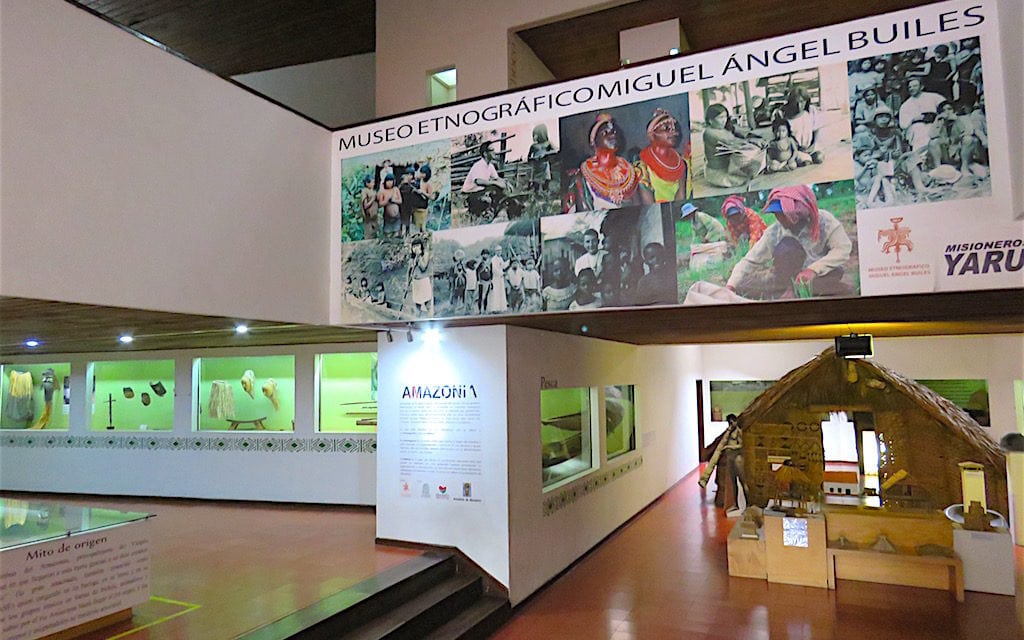 Museo Etnográfico Miguel Angel Builes (MEMAB) is a museum dedicated to preserving the cultural patrimony of Colombia by exhibiting ethnographic pieces showing the cultural diversity of ethnic groups in Colombia.

It’s worth a visit to the Miguel Angel Builes Ethnographic Museum to see the large collection of over two thousand ethnographic pieces of daily use, ritual and subsistence on display. The exhibits in the museum demonstrate the great cultural richness of the indigenous and Afro-ethnic groups in Colombia.

Museo Etnográfico Miguel Angel Builes, also known as MEMAB, opened in Medellín in 1972. The exhibits in the museum are arranged on three floors in five permanent exhibit halls.

This museum is a hidden gem that isn’t found an any of the 10 English language Colombia guidebooks I have.

Note the above photo is inside Museo Etnográfico Miguel Angel Builes. 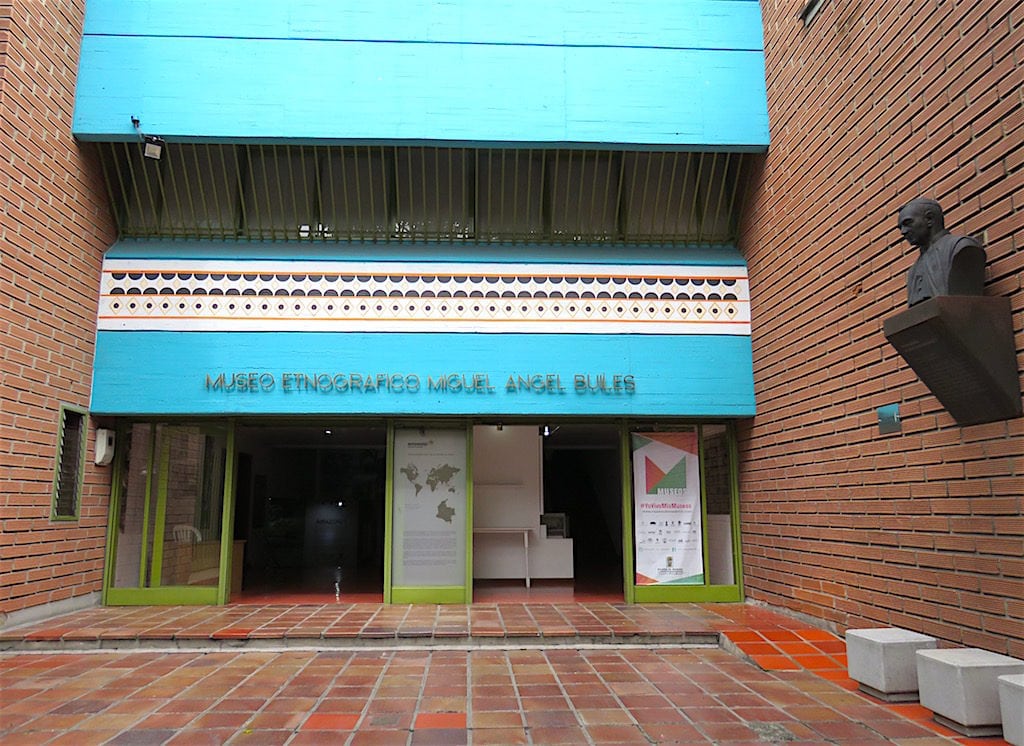 In the 1950s, the Seminary of Missions of Yarumal, began to collect objects created by the natives of the places where the missionaries realized their first missions. This was the origin of what we know today as Museo Etnográfico Miguel Angel Builes.

The museum originally began at the Yarumal Missions Seminary in 1962. In 1970, Father Heriberto Correa Yepes and The General Council, determined that they should build a building in the city of Medellín that was destined for a museum.

The goal of the museum was to share with the community this important collection of objects that show the great cultural richness of the indigenous and Afro-ethnic groups in Colombia that missionaries have been interacting with. 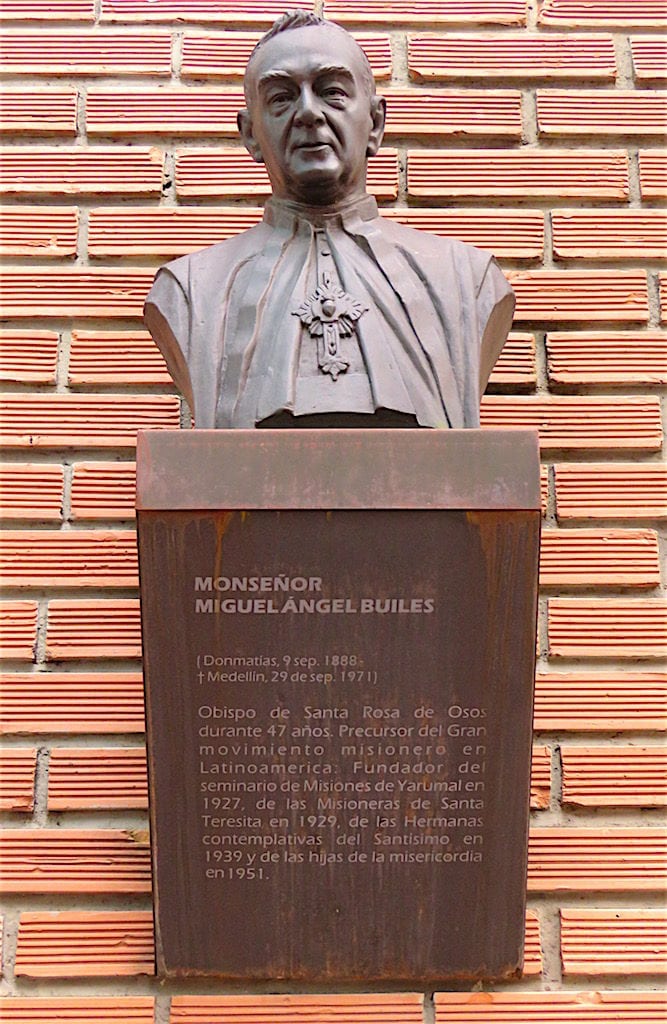 The Museum has an inventory well over two thousand ethnographic pieces of daily, ritual and subsistence use, representative of the diverse ethnic cultures of Colombia and other countries.

The exhibits are arranged in five permanent exhibition halls: Amazon; Antioquia and Chocó, Caribbean; Asia, Africa and Latin America and the Archaeological Hall. 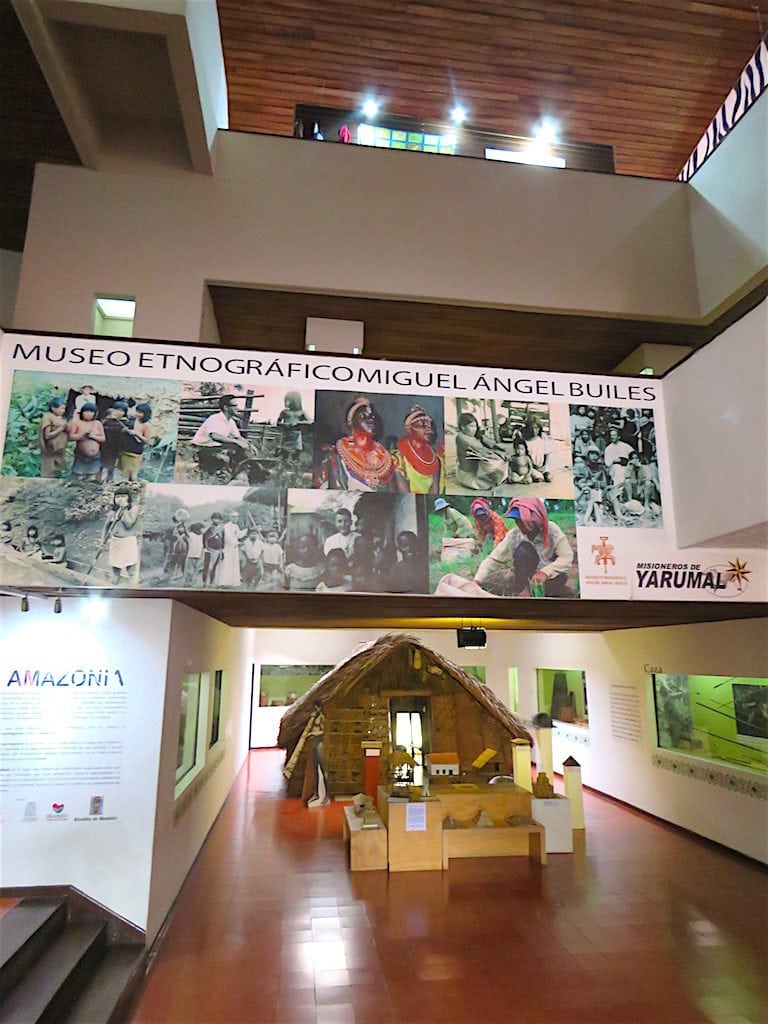 The Seminary of Foreign Missions was founded in Yarumal, Antioquia, on July 3, 1927. The first missionary priests were ordained in 1938 and began their missionary work in the North Coast of Colombia.

Over the years, the missionaries founded missions in diverse territories of Colombia, among them: Labateca, Santander; Arauca, Vaupés, Guaviare and Guainía; Buenaventura; Istmina (Chocó) and San Andrés and Providencia. Missionaries interacted with many indigenous, mestizo and afro-descendant communities.

In addition, in the museum, there is a small introductory hall that shows the story of the missionary work of the Missionaries of Yarumal for more than 80 years. 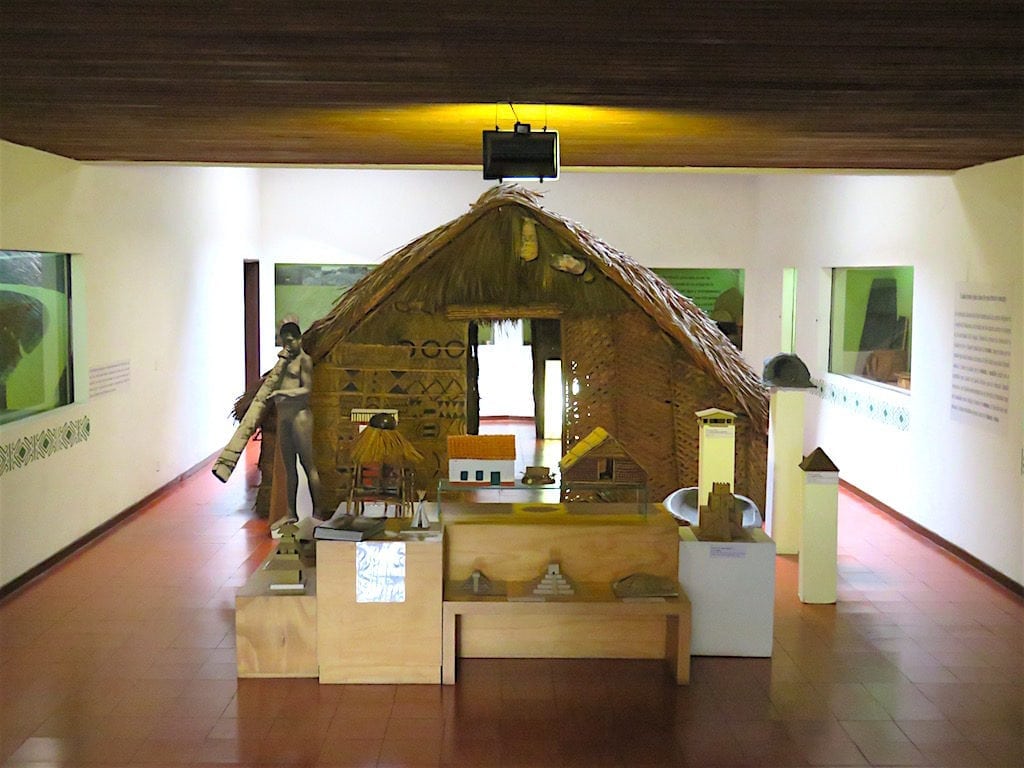 Habitat exhibit in the Amazon Hall

The Amazon is the largest rainforest in the world, occupying large areas in Brazil, Colombia, Peru, and Venezuela. In Colombia the Amazon region represents more than a third of the territory in the country. 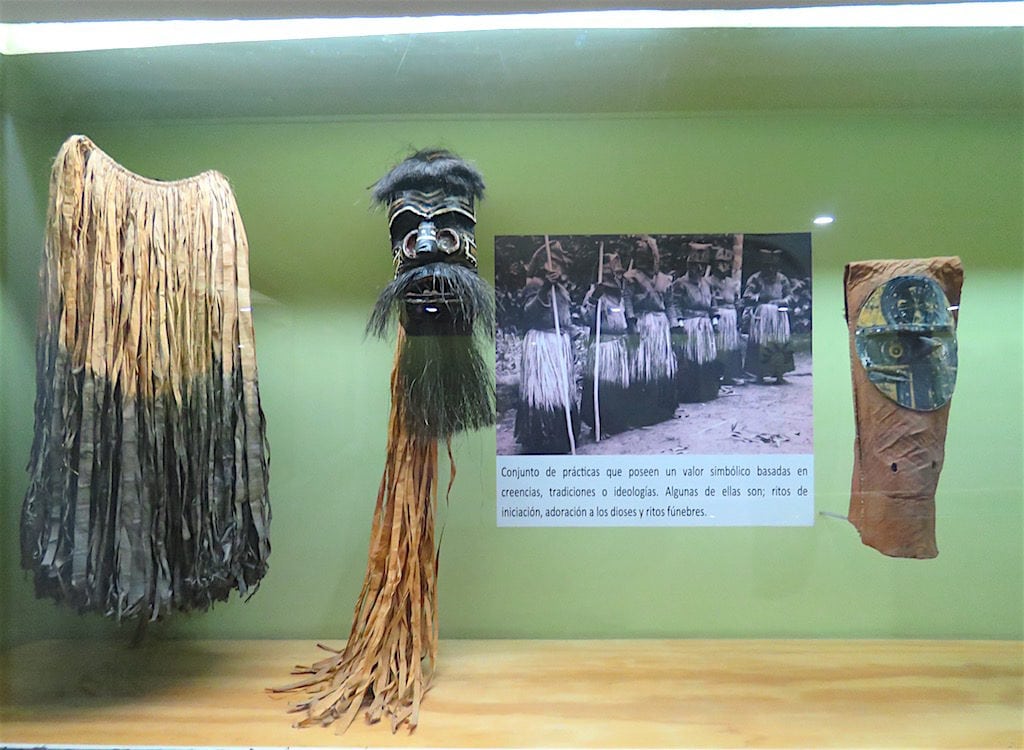 One of many exhibits in the Amazon Hall

The cosmogony is a mythical account that explains the origin of the universe and is associated with the spirituality and beliefs of a person or group. In this part of the museum, you will find objects related to social differentiation, music and rituals in the Amazon region.

The habitat is the place that can be inhabited by a human population allowing its survival and reproduction. In this section you will find exhibits referring to housing, hunting and fishing in the Amazon region. 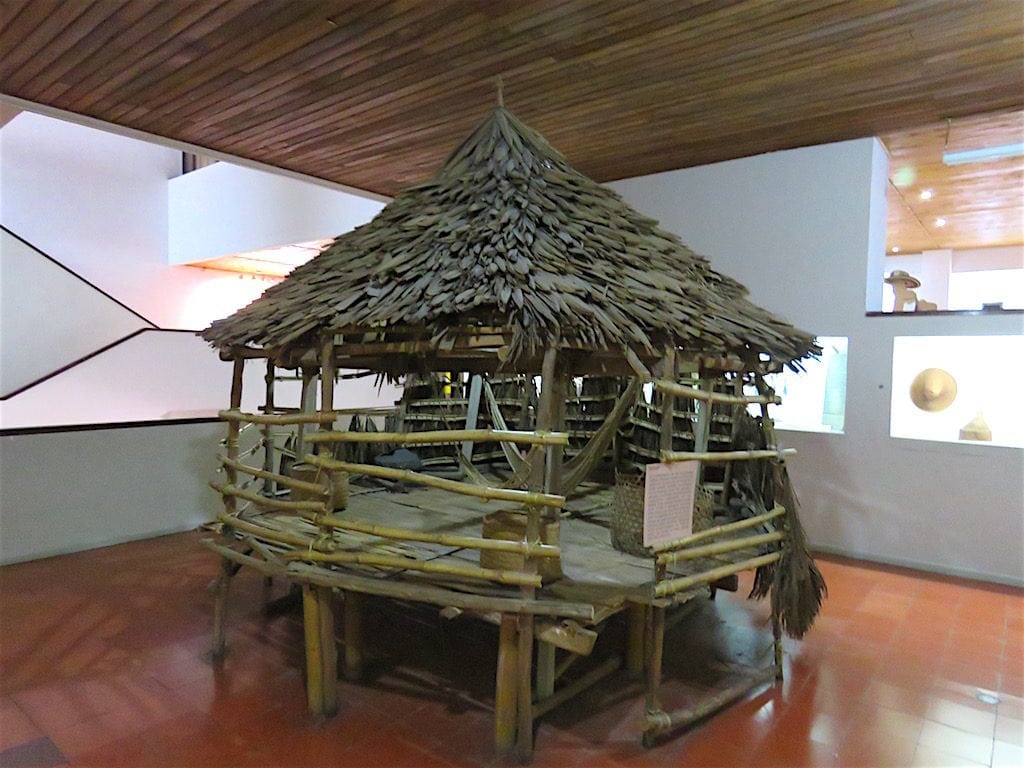 Replica of a bohio or tambo, which is a dwelling for the inhabitants of the banks of the rivers

The departments of Antioquia and Choco in Colombia harbor a great cultural diversity. Indigenous, Afro-descendants and Paisas inhabit these areas.

In this hall there is a replica of a bohio or tambo, which is a dwelling for the inhabitants of the banks of the rivers. 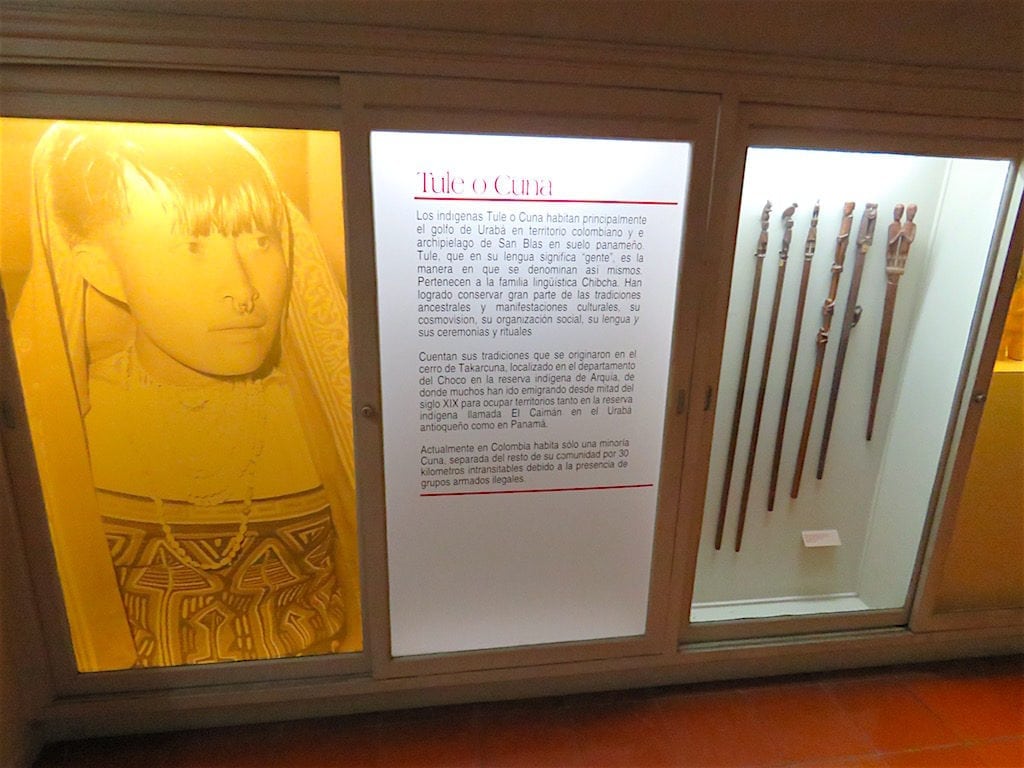 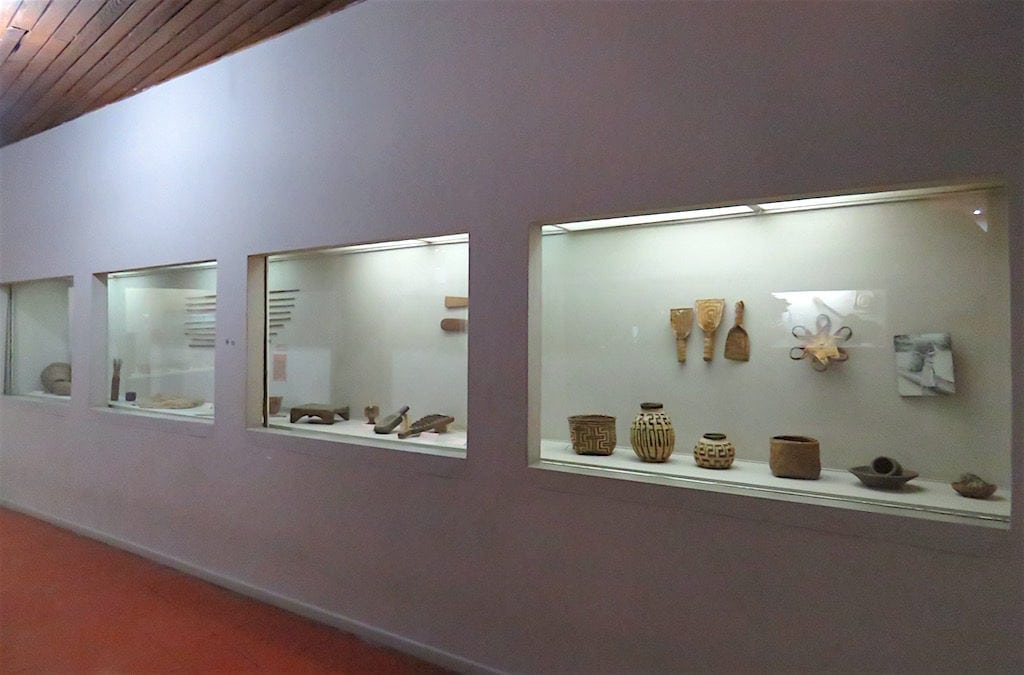 Additional exhibits in the museum

In addition, in this hall there are examples of musical instruments of the Pacific region (drums and marimbas). 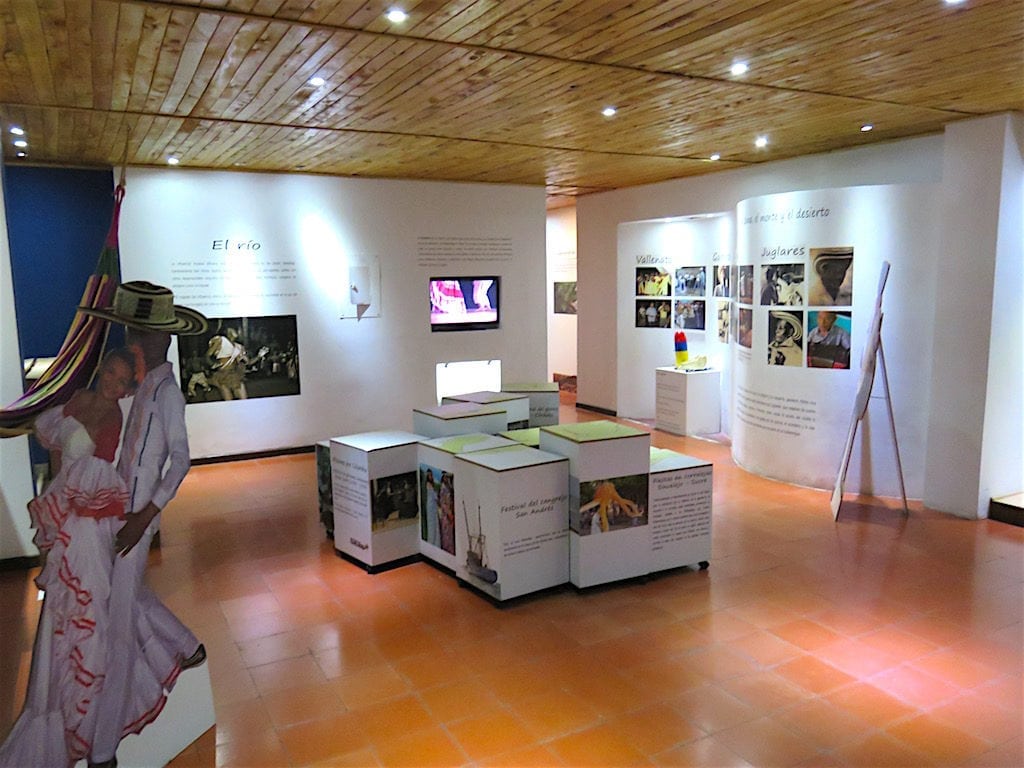 Part of the Caribbean Hall exhibits

The Colombian Caribbean, beyond being a territorial area of Colombia, is a multicolored cultural explosion that is a product of multiple cultures. Indigenous groups from the region include Wayú, Koguis, Arhuacos, Chimilas, Tunebos and Guanes.

Also, the music of the Colombian region can demonstrate an intercontinental fusion and a legacy of many American ethnic groups that disappeared after the process of European conquest. 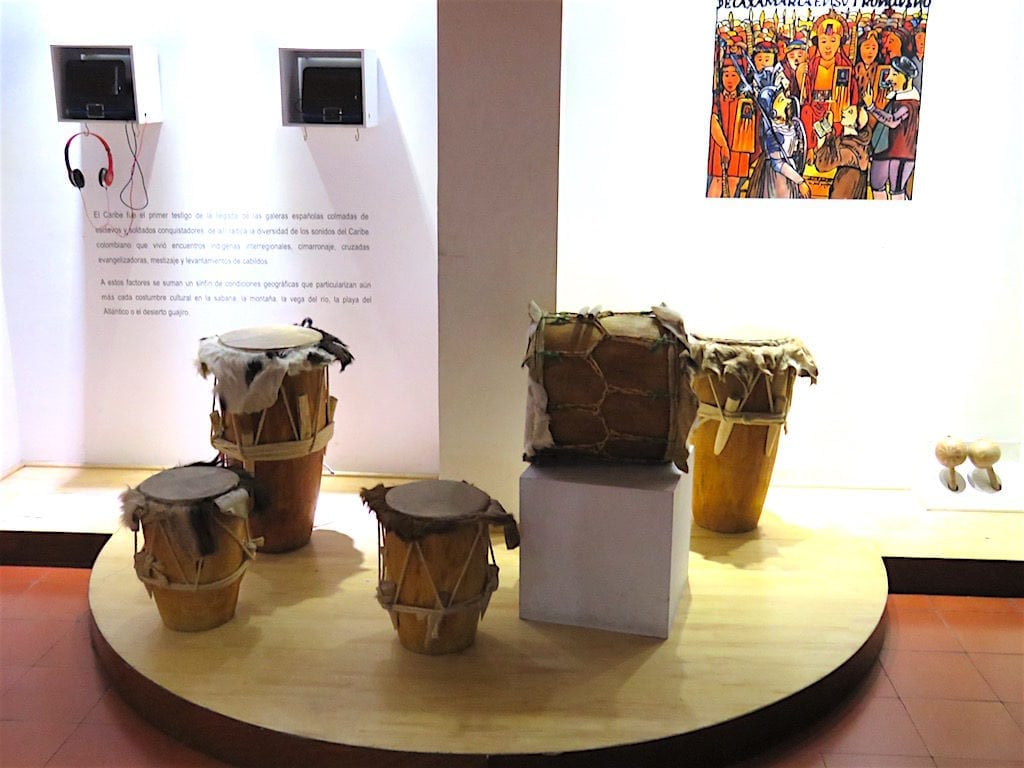 You can listen to Caribbean region music

This is an interactive room in which the visitor can meet the Colombian Caribbean region through its music. You can listen to ocarinas, bagpipes, whistles and drums to experience the music of this area of Colombia. 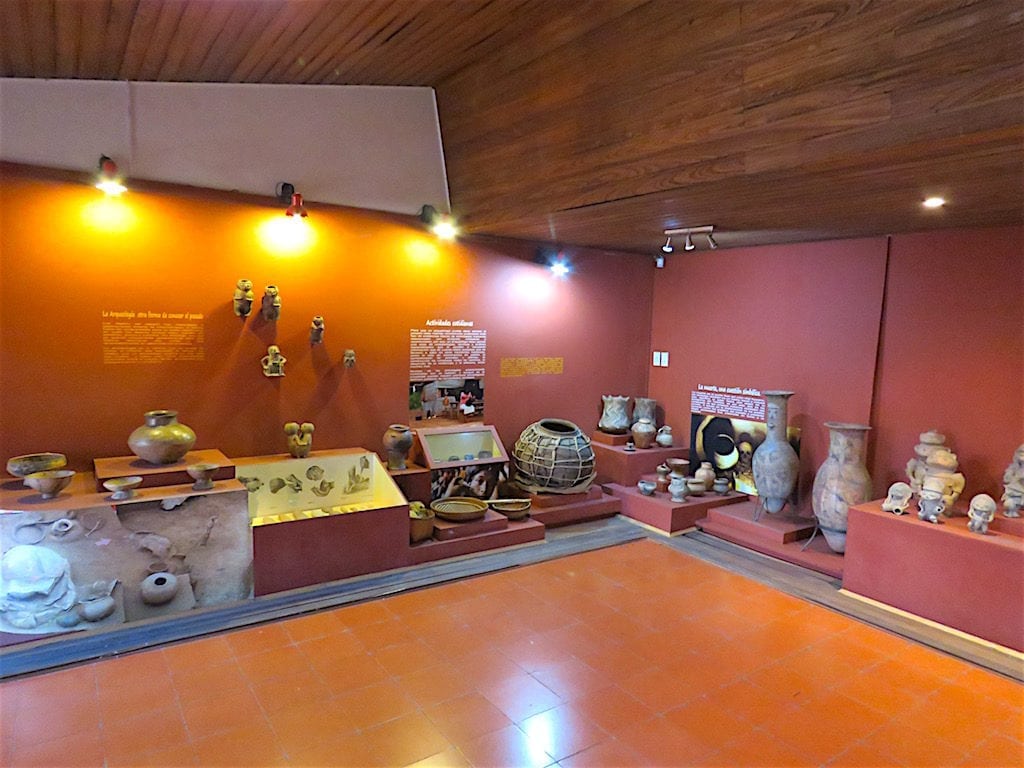 Some of the items on exhibit in the Archeological Hall

The history of the Miguel Angel Builes Ethnographic Museum has left in its custody a large number of assets of Colombian heritage interest including ethnographic and archaeological items that have served as exhibition material for more than 40 years.

In the archeological hall are found many original pieces, some of which were created by natives over five hundred years ago. They are considered very valuable archaeological heritage pieces.

How to Get to Museo Etnográfico Miguel Angel Builes (MEMAB)

The easiest way to get to Museo Etnográfico Miguel Angel Builes is via the Medellín Metro. The museum is located about a 15-minute-walk from the Floresta metro station on Line B.

Or you could take a minimum fare 5,600-peso taxi from the Floresta metro station to the museum

Also, you could take a taxi from your location in the metro area directly to the museum. Not many taxi drivers in Medellín will know where Museo Etnográfico Miguel Angel Builes is located. So, you will need to provide the address of the museum listed below.

In addition, it’s normally pretty easy to catch a taxi in the street in front of the university.

Hours: Monday to Friday: 8 am to noon and 2 pm to 5:30 pm, Saturday 8 am to noon.  Closed on Sunday and holidays. Note that the museum many look closed from the outside but the guard will open the outside door during the hours the museum is open.

Entrance fee: the museum asks for a 5,000 peso per person donation to support the museum. There is a small box to collect donations near the entrance. 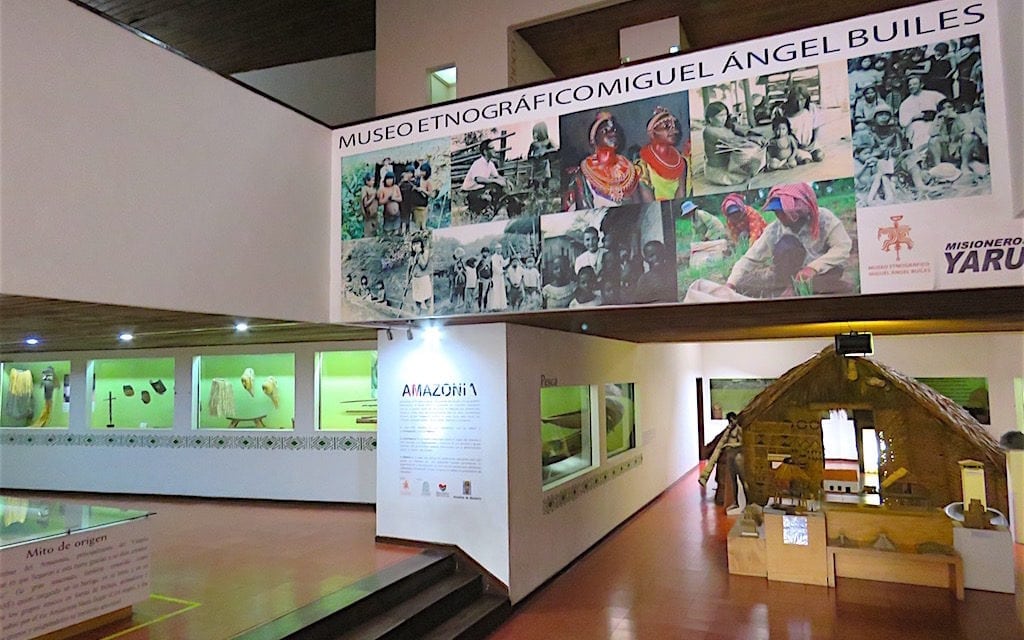 Museo Etnográfico Miguel Angel Builes is a hidden gem museum that isn’t found in any English language guidebooks. In addition, this museum doesn’t get as many visitors as the more well-known museums in Medellín like Museo de Antioquia and Parque Explora.

The last time I visited MEMAB was with a friend visiting Medellín and this was on a weekday in the afternoon. And we were the only two people in the museum. My friend wanted to visit one of the less well-known museums in Medellín and he found the museum very interesting. But I had to translate, as all the exhibit placards in the museum are in Spanish only.

The bottom line is that Museo Etnográfico Miguel Angel Builes is worth visiting for an hour or two to learn about the cultural diversity of the indigenous and ethnic groups in Colombia. 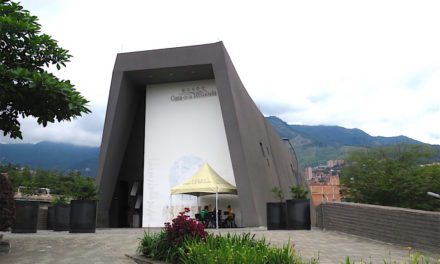 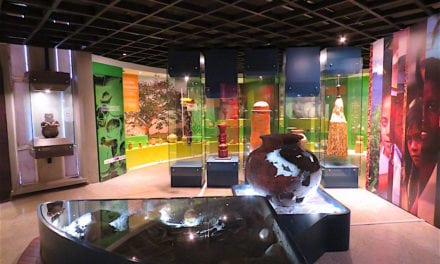