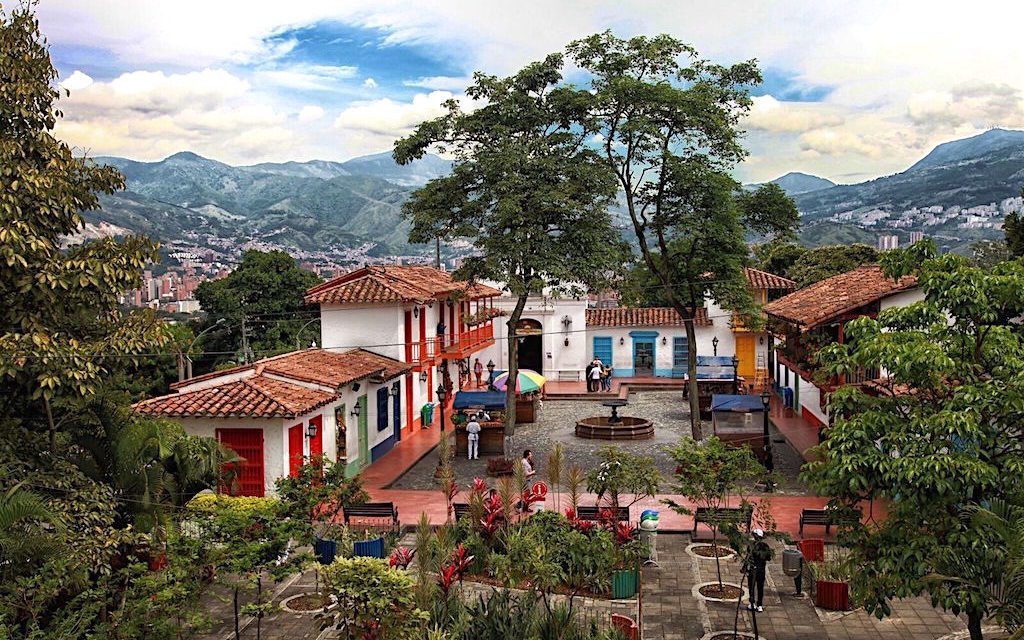 Pueblito Paisa is located at the top of Cerro Nutibara (Nutibara Hill) and it’s one of the most popular tourist attractions in Medellín. Pueblito Paisa has been closed for over five months but reopens on the weekend on October 2.

Pueblito Paisa is a replica of a turn of the century town in Antioquia, complete with a fountain in the middle of a cobblestone town square plus a white church. Also, Museo de Ciudad, the Medellín City Museum is nearby and worth seeing.

Since it is located on a high hill in the middle of the Aburrá Valley, it also offers great views of the city of Medellín and the surrounding mountains.

The first hills in Medellín to allow visitors to enter in over five months due to the coranavirus pandemic were Cerro El Volador and Cerro Tres Cruces, on September 11 and 12 respectively.

At the beginning of October, Cerro Nutibara where Pueblito Paisa is located will reopen, which will be open from 5 am to 11 pm daily starting on October 2, 2020.

Entry to Cerro Nutibara and Pueblito Paisa is possible for sports, environmental and pedestrian access activities. Also, merchants at Pueblito Paisa can reopen. But there will be no vehicle parking until further notice.

The following are required biosafety protocols for Cerro Nutibara and Pueblito Paisa: 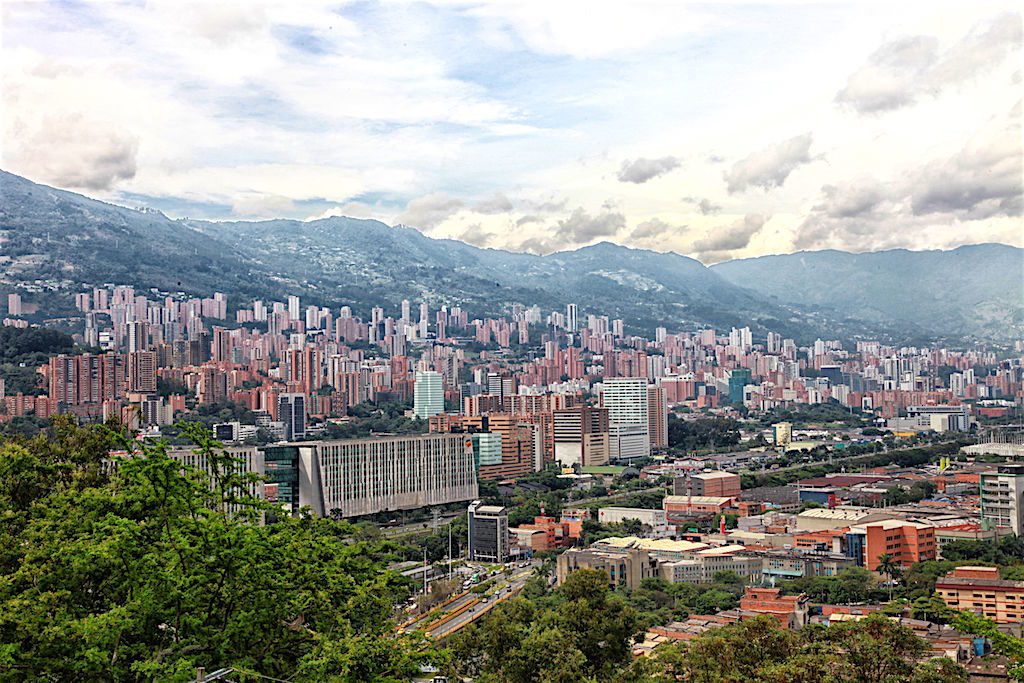 The city of Medellín bought the hill in 1927 with a plan to create a recreational park on the hill. In addition, at that time, the hill was renamed to Nutibara in honor of one of the historically most powerful of the chiefs in Antioquia.

The plan to build a park was approved in 1939. This included the design and construction of roads for access, gazebos, bridges, parking and viewpoints plus planting of trees. Also, an initial restaurant was built at the top. The park is currently sized at about 81 acres (33 hectares).

In 1975, during planning for the tri-centennial of the city, Medellín and several local companies joined forces to finance construction of a replica of a typical turn of the century pueblo in Antioquia at the top of Nutibara hill, with all the traditional characteristics.

The project was led by architect Julián Sierra Mejía. And construction began in 1976. Pueblito Paisa officially opened on March 3 1978.  In addition, it was built at a cost of over two million dollars. 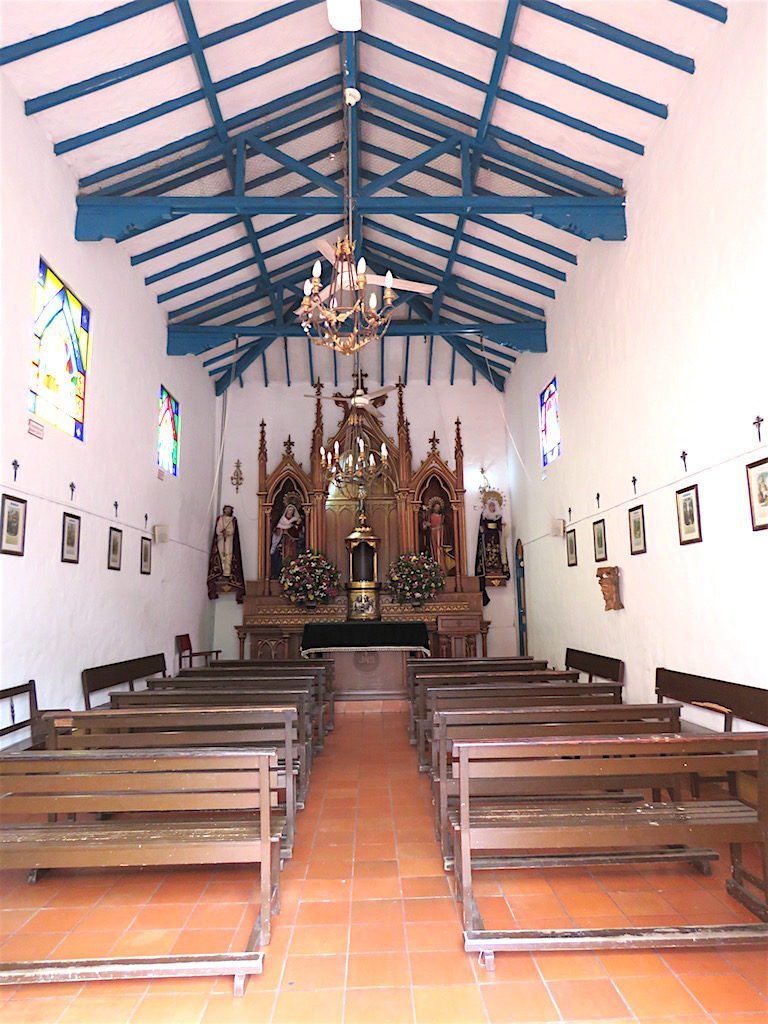 Inside the church at Pueblito Paisa

Furthermore, the site uses a number of materials that were salvaged from homes in a pueblo that were flooded when the manmade lake El Penol was formed. This was due to construction of a dam and massive hydroelectric power plant, located about two hours from Medellín. 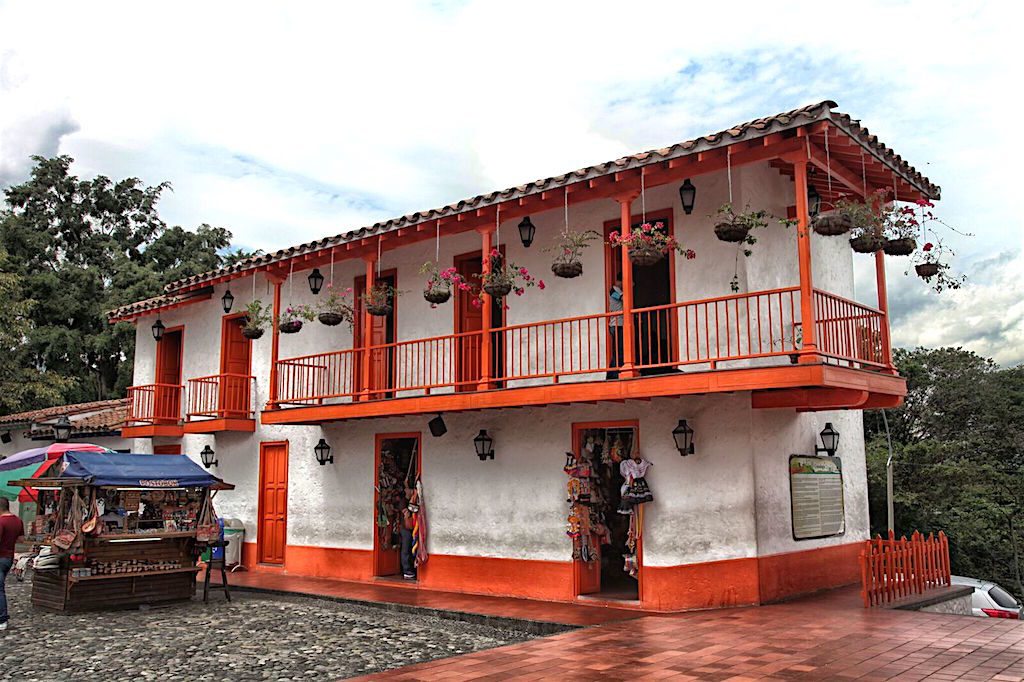 One of the buildings at Pueblito Paisa, photo by Jenny Bojinova 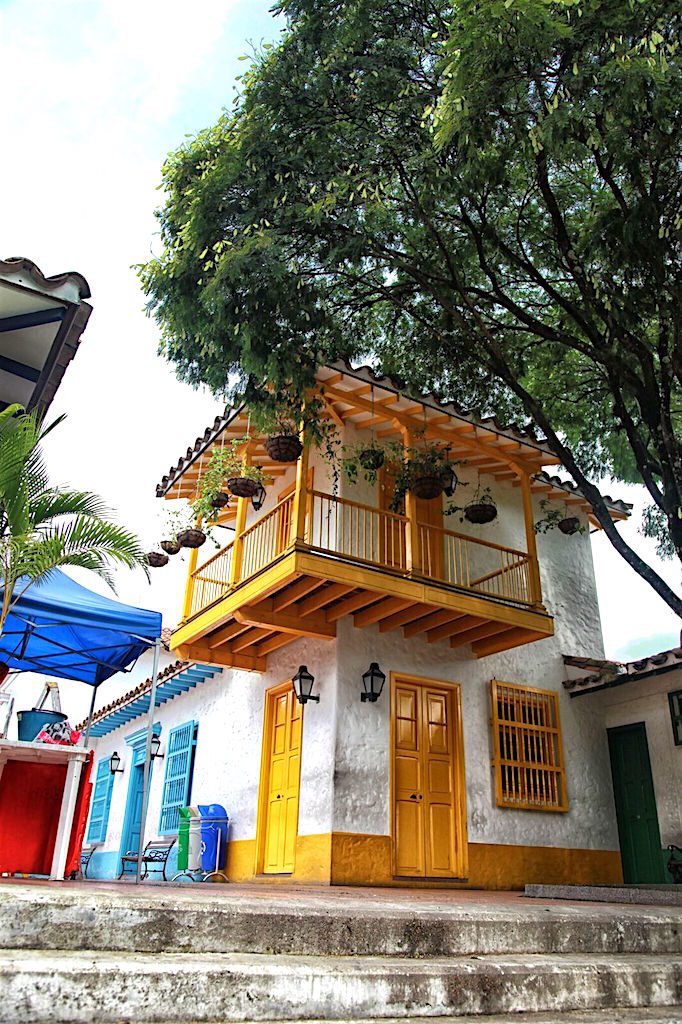 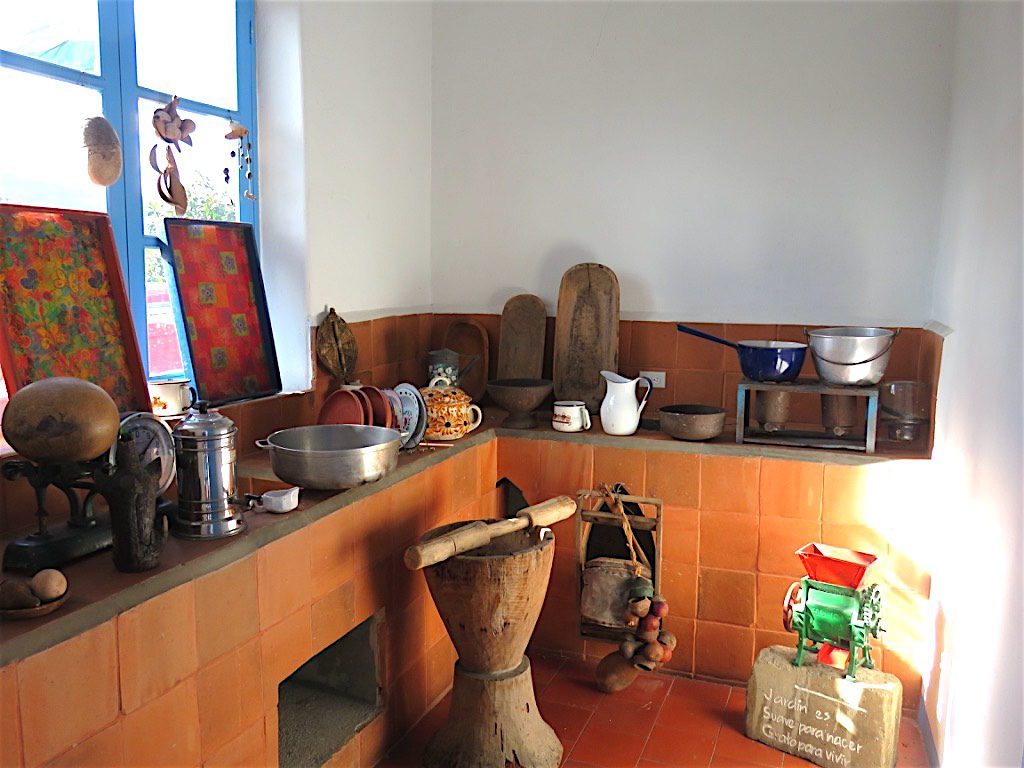 Turn of the century kitchen at Pueblito Paisa

When building the replica town, they reused a number of building materials from the now flooded pueblo, including doors, casings and windows. The wooden alter used in the church reportedly dates back to the 1920s.

Besides the church, the replica pueblo includes a mayor’s office, small school, barber, and some typical houses. One house even has a turn of the century kitchen. 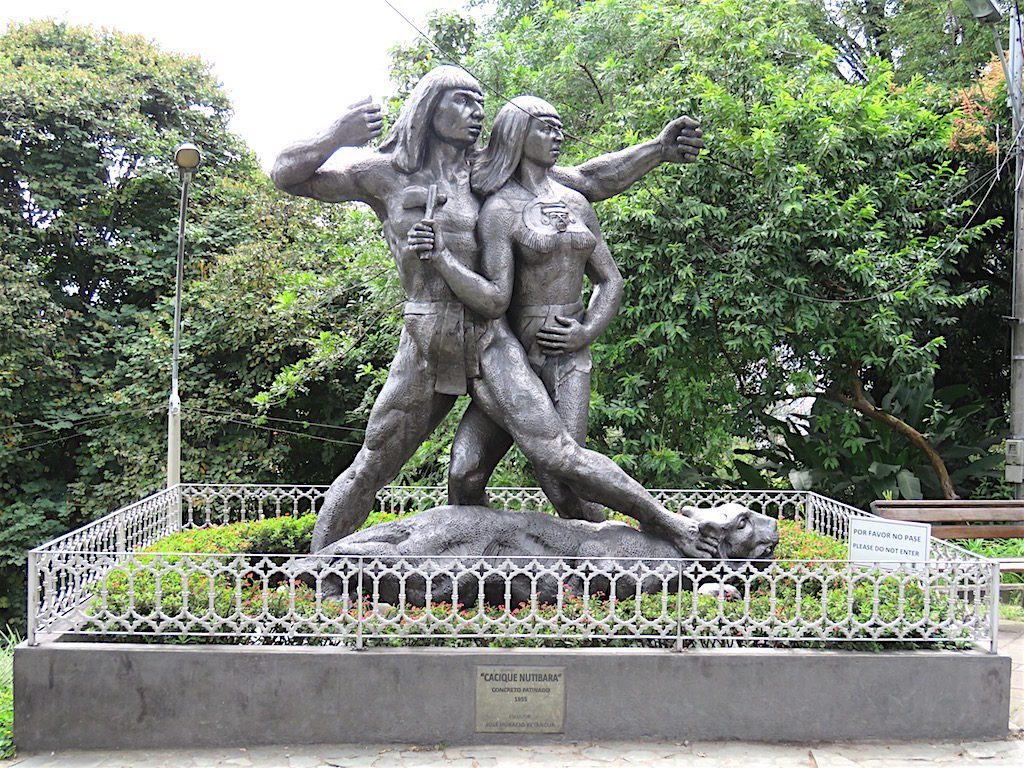 There is also a sculpture park created in 1983 on Nutibara Hill. The Museum of Modern Art in Medellín coordinated a permanent exhibition of sculptures. The sculptures were made by 10 national and international artists, which were installed in the natural surroundings of the hill.

Probably the most famous of the sculptures is Cacique Nutibara by the teacher José Horacio Betancur Betancur.  This sculpture, made in 1955, is painted concrete, weighs four tons and measures 3 m high by 2.9 m wide. The figure depicts Chief Nutibara, accompanied by a warrior and a puma at the feet, as a symbol of bravery and power. 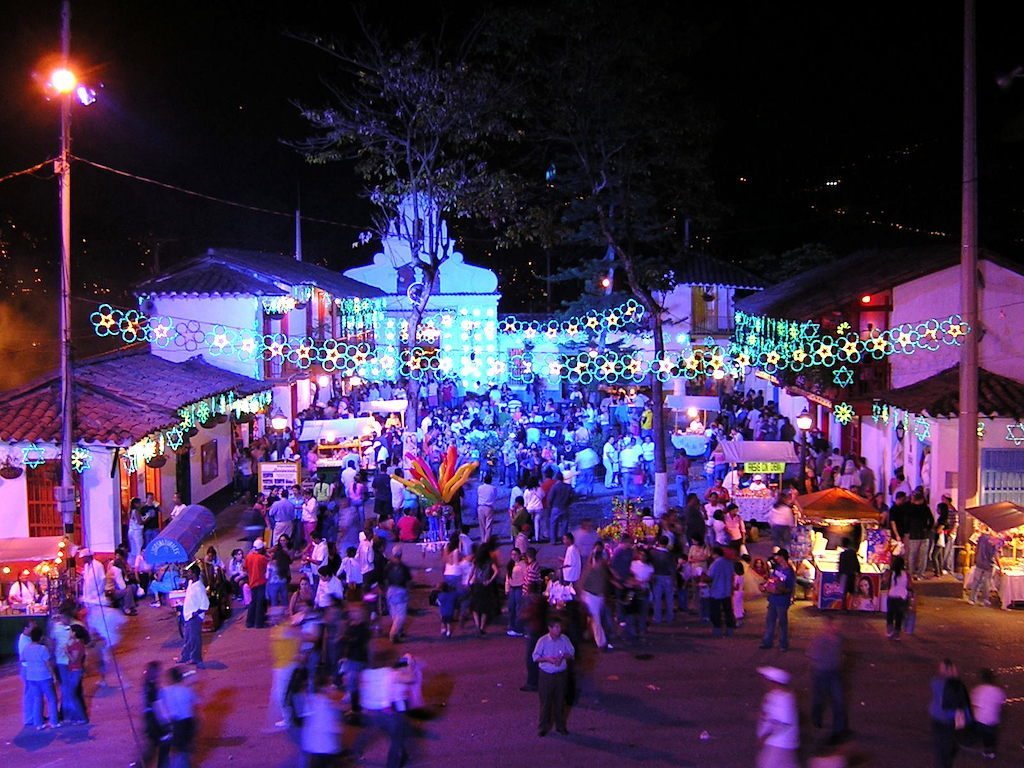 During the month of December, Nutibara hill becomes a more popular location for tourists, as it offers excellent views of the city during the holidays. Most noteworthy, from this location it is possible to see not only the Christmas lights at Pueblito Paisa, but also the Christmas lights throughout the city. 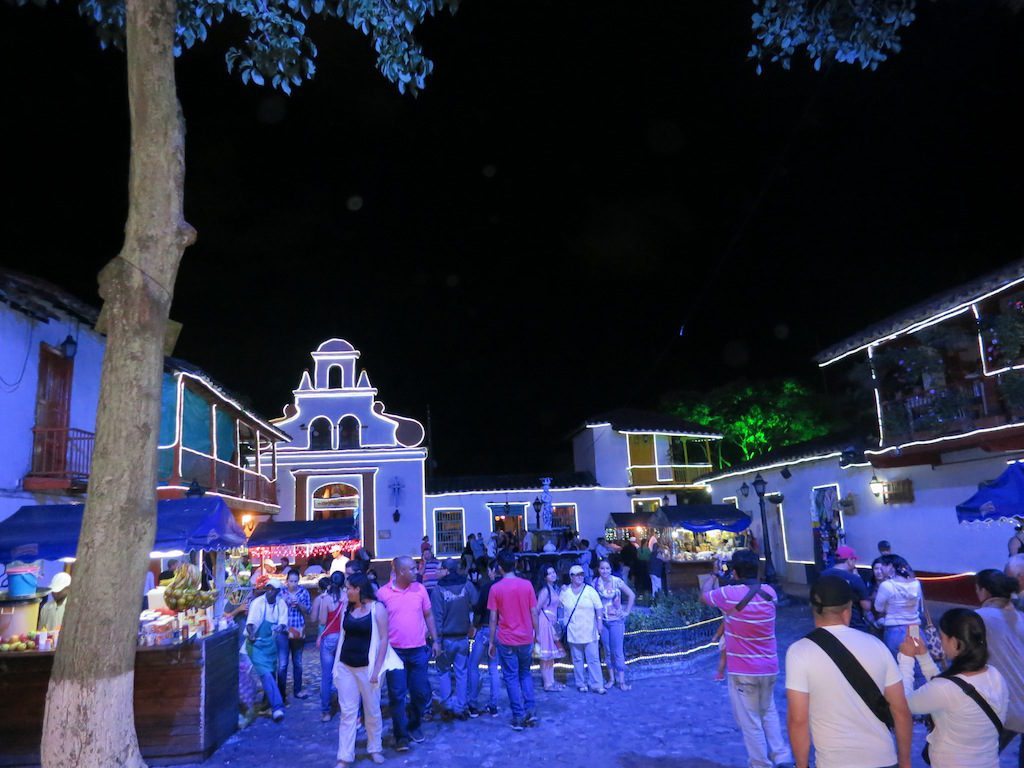 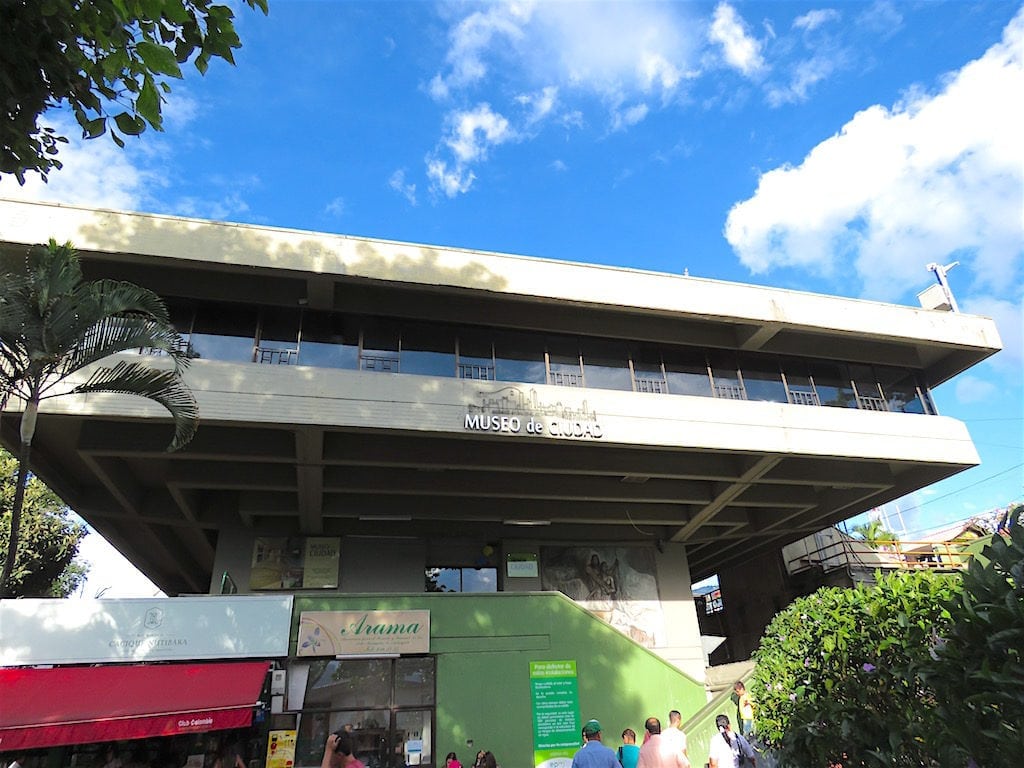 Next to Publito Paisa at the top of Nutibara hill is Museo de Ciudad, Medellín’s City Museum. This museum is a relatively small museum. But it’s worth seeing while visiting Publito Paisa.

I found it very interesting to see all the old photos of the city of Medellín. Here are several of the photo exhibits: 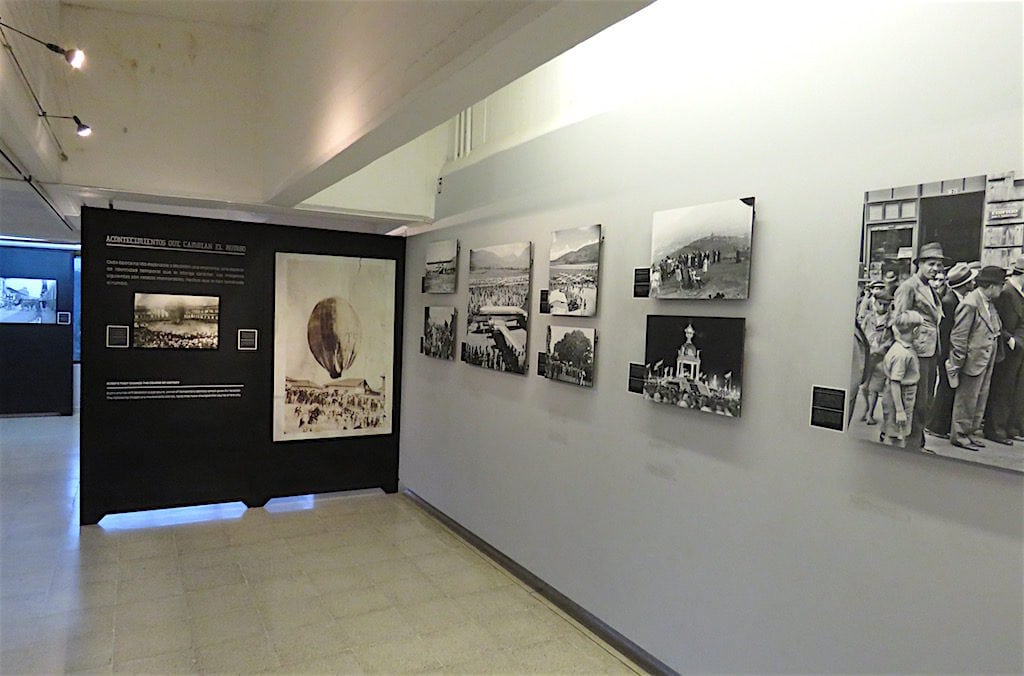 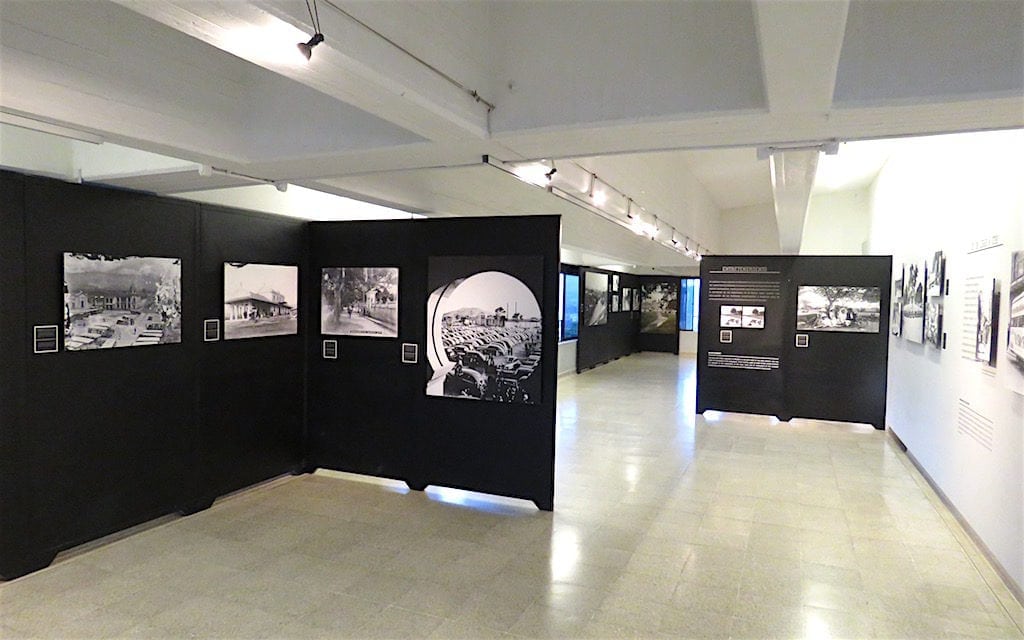 More of the photo exhibits in Museo de Ciudad 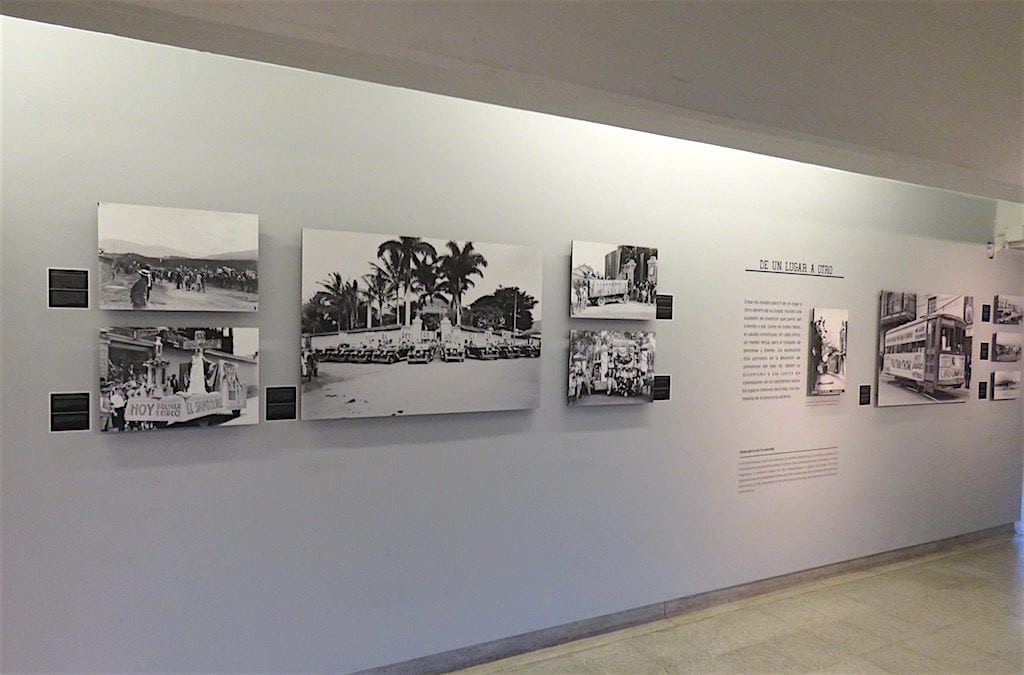 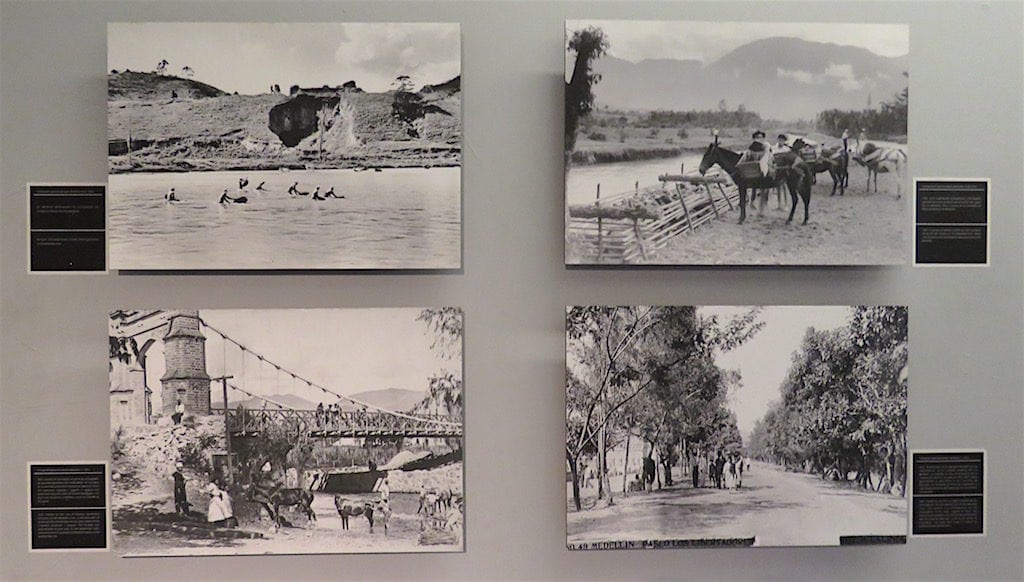 Old photos of the Medellín River in the museum 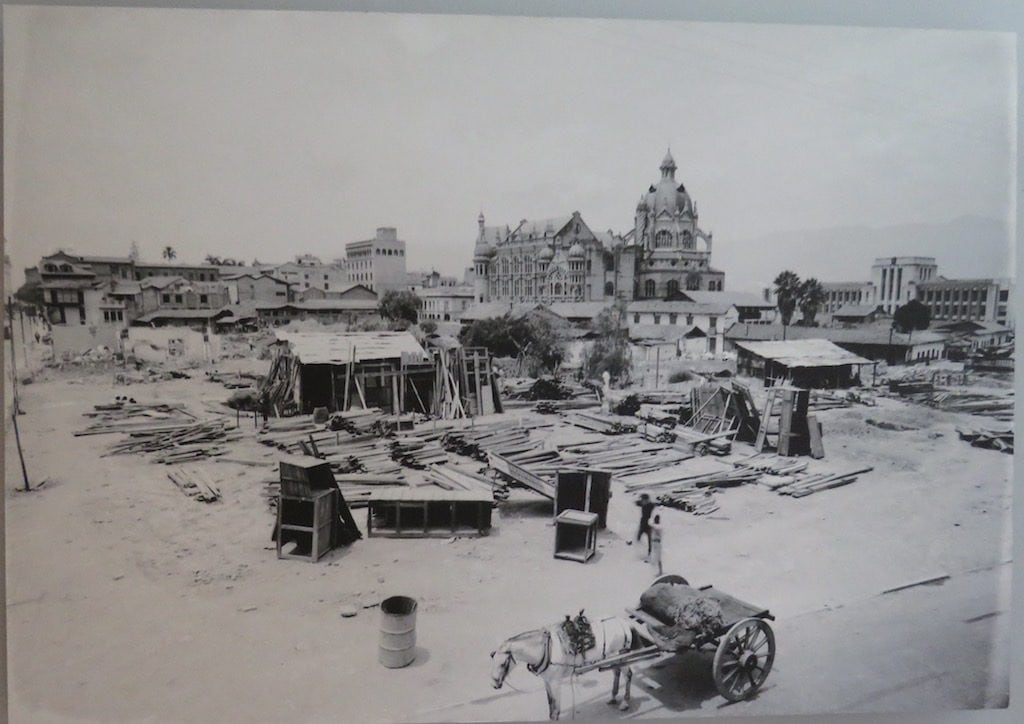 Since the beginning of the 1980s, the Biblioteca Publica Piloto de Medellín started a process to collect the visual and photographic history of the city of Medellín. This impressive collection of photos now includes about 1,700,000 images. And many photos from this collection are displayed in Museo de Ciudad. 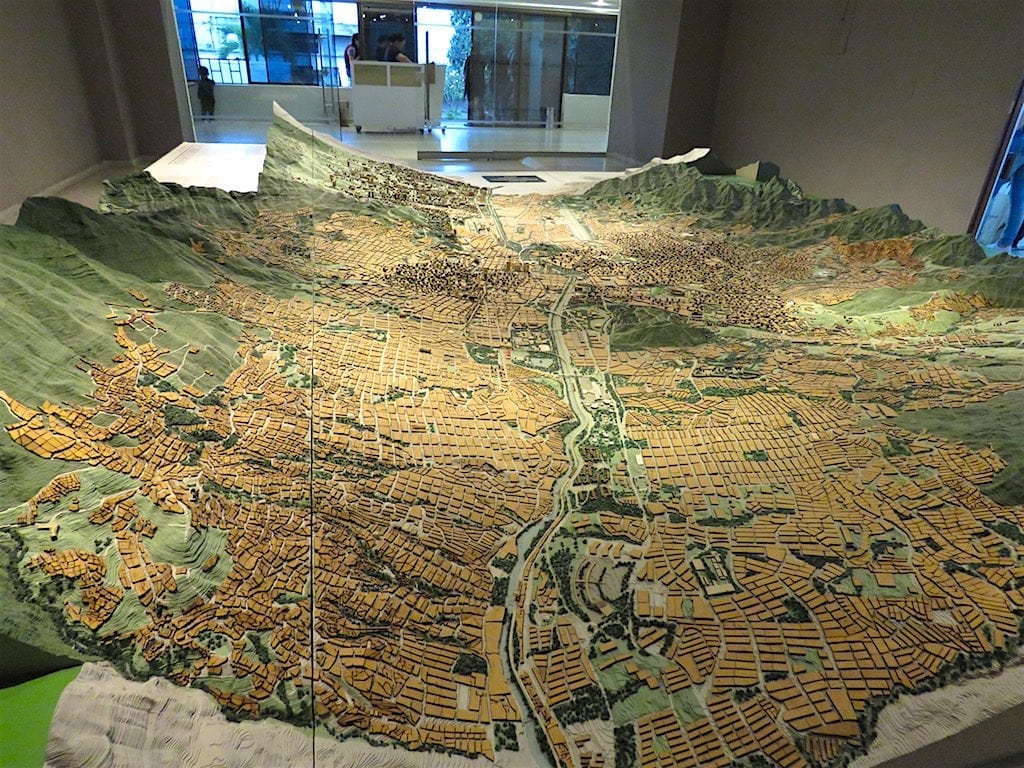 Scale model of the city of Medellín

Also, there is an interesting scale model of the city of Medellín, which is a permanent exhibit in the museum .

How to Get to Pueblito Paisa

The easiest way to get to Pueblito Paisa is to take a taxi as every taxi driver in the city knows where it is. The taxi cost from locations in El Poblado should be about 10,000 pesos. In addition, when you leave it is typically easy to catch a taxi since it’s a popular tourist destination.

It is also possible to reach Pueblito Paisa by walking from the Industriales metro station. But it’s a long walk uphill. And sometimes the road is lonely. So, to be safe we recommend taking a taxi. 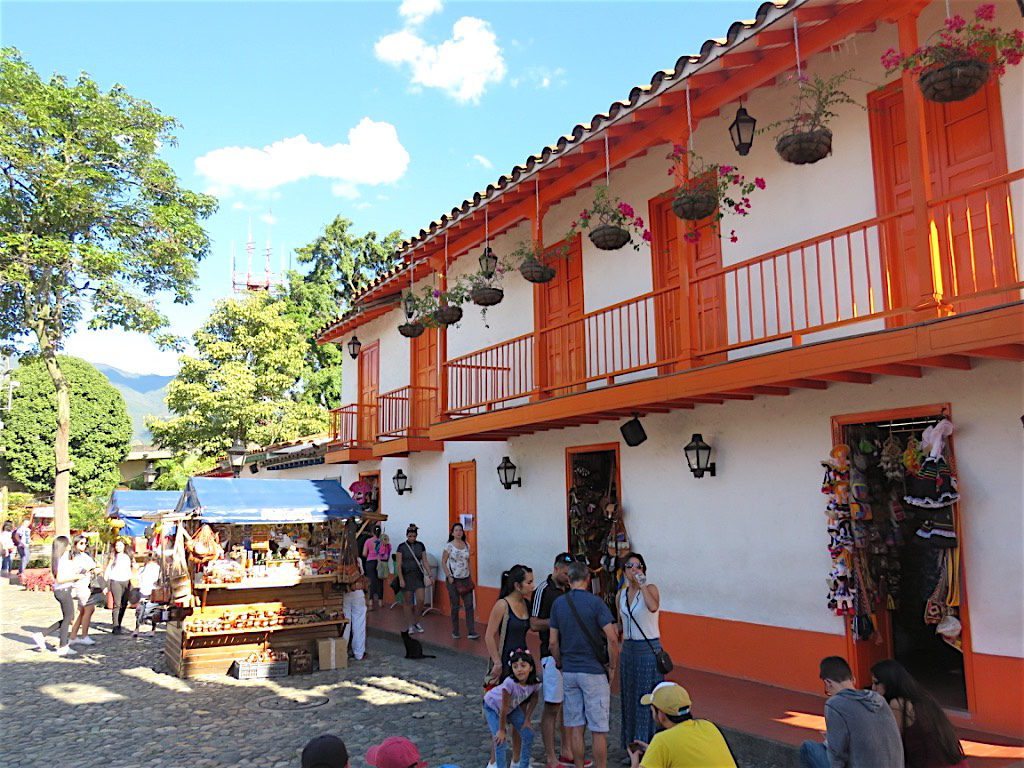 Pueblito Paisa is a popular tourist location in Medellín that is definitely worth seeing and is finally reopening after being closed for over five months. Also, Cerro Nutibara (Nutibara Hill) offers some great views of the city of Medellín.

Also, Museo de Ciudad, the Medellín City Museum, is located next to Pueblito Paisa and is also worth seeing.

Editors note: updated on September 29, 2020 with information that Pueblito Paisa and Cerro Nutibara is reopening and added new biosafety protocols. 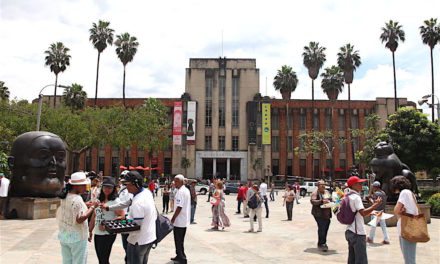 Museo de Antioquia: A Guide to Medellín’s Most Popular Museum 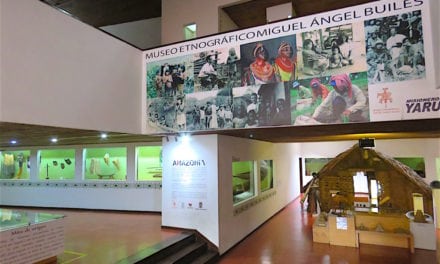