Tejo: A Colombian Game That Rewards You for Explosions 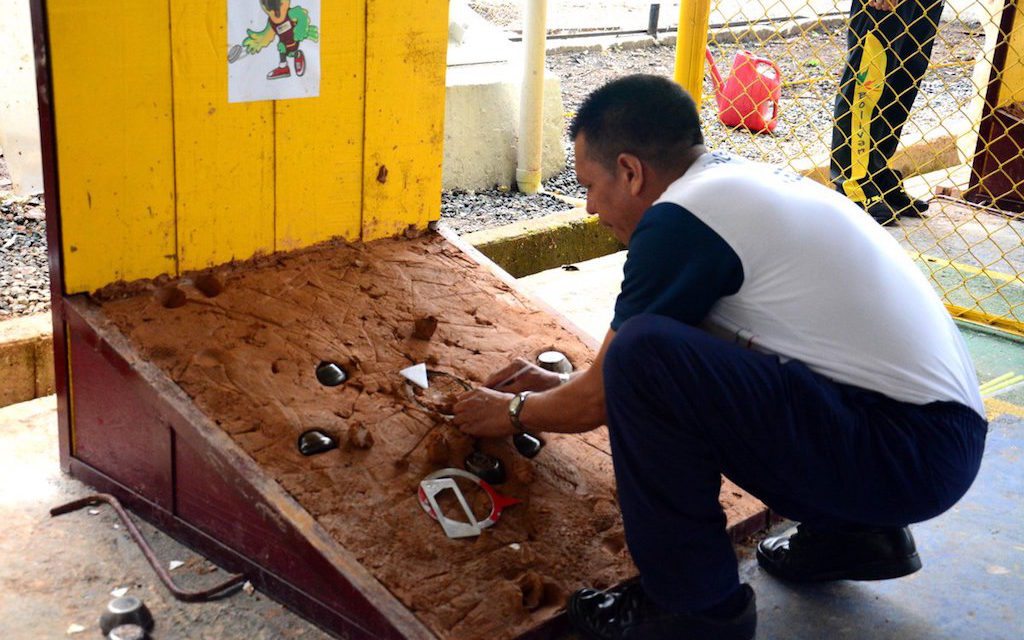 If you are visiting Medellín or Colombia for the first time, you must play a game of Tejo. Medellín has bowling but it also has Tejo that is much more popular. You may not have heard of Tejo (pronounced TEY-HO), also known, to a lesser degree, as turmeque.

But if you are familiar with similar games such as cornhole or bags in the U.S. or Europe, you will surely understand the concept. Even if you haven’t, I guarantee you will have a blast learning and playing this game.

Tejo is one of the oldest and most popular sports in Colombia. And it was even named the national sport of Colombia in 2000.

Rumor has it, this game originated more than 500 years ago and was very popular amongst Colombia’s aboriginal people in the center of the country.

In Colombia, it is common to find professional Tejo teams in the major cities and smaller towns. Many of these teams are sponsored by beer companies and they even hold highly organized tournaments. And tournaments typically pit two- and four-member teams or individual players against one another.

Note the above photo is a typical board, otherwise known as a pitch, photo courtesy of @TejoColombia. 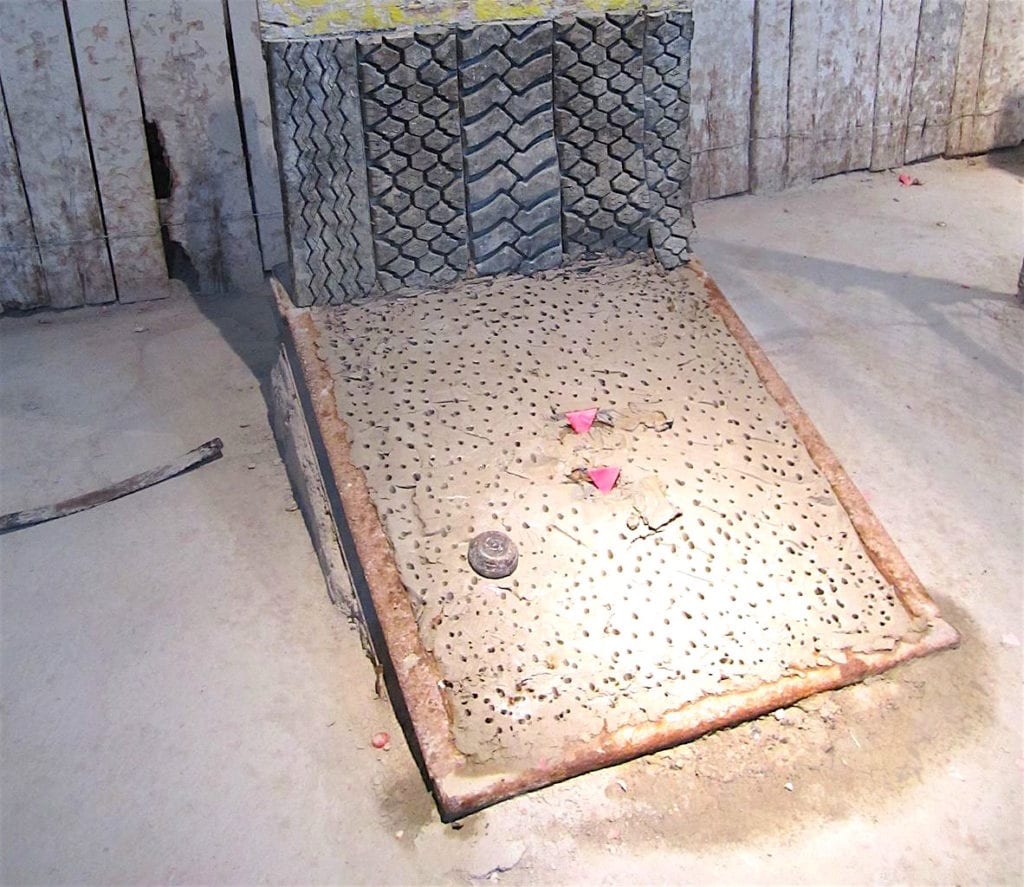 The typical board, known as a pitch, photo by Neil Taylor

How to Play Tejo

Growing up as a Midwest girl in the United States, cornhole (or bags) was commonplace at backyard barbecues and graduation parties. This fun, light-hearted and competitive game became one of my favorite summer traditions.

Tejo has many similarities to bags or cornhole, with a few stark differences. First, you’ll normally divide into two teams with approximately four players each. And players stand 72 feet (22 meters) away from a box filled with clay. This box is called a pitch.

Next, you’ll throw a heavy steel disk (called the tejo) underhand in an attempt to hit the metal ring in the center (a bocin) and/or the mechas. This disk weighs approximately 680 grams.

Mechas are the white or colored triangle shaped packets filled with gunpowder. Hitting one of these bad boys with your tejo is likely to result in an explosion. The explosion sound is similar to what you hear with a gun when it is fired.

The typical board, otherwise known as a pitch, is usually a wooden box  filled with clay and tilted at a 35 to 45 degree angle. 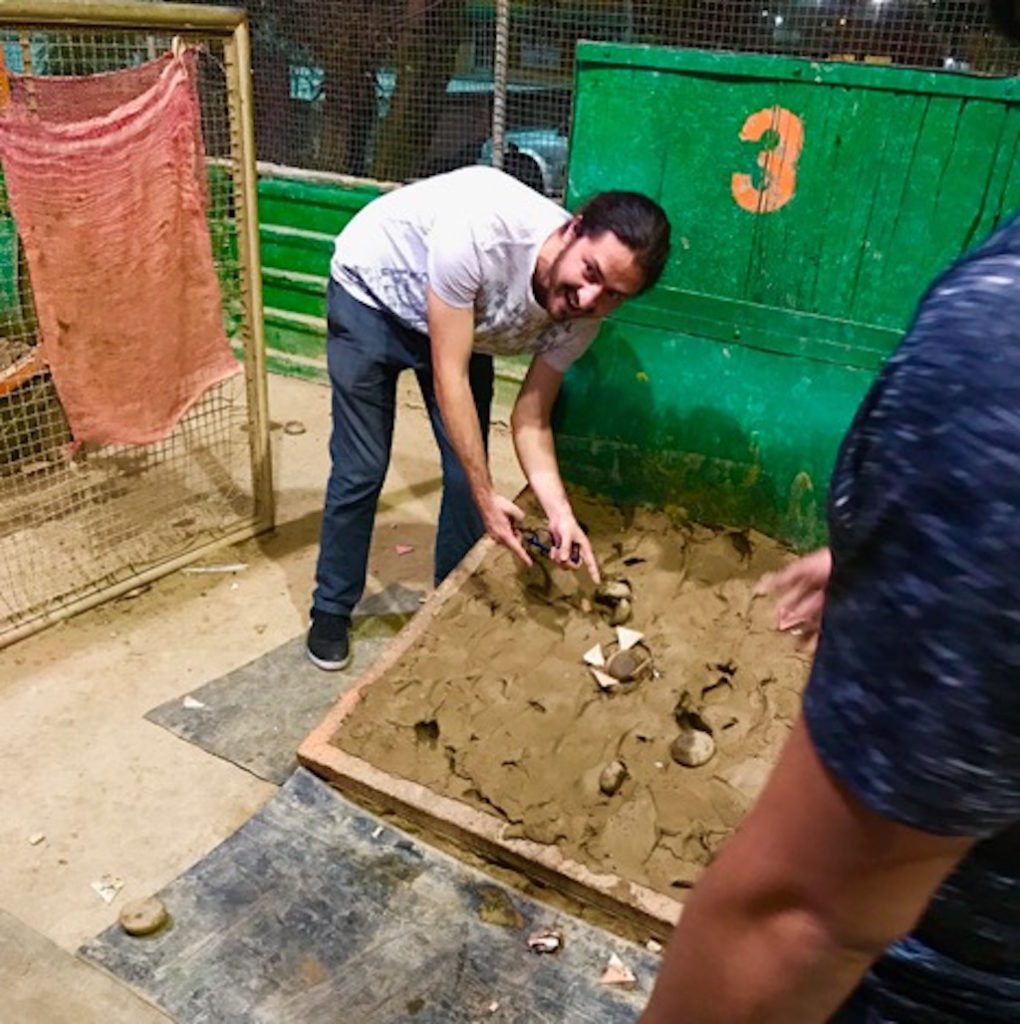 My teammate with a bullseye!

There are several ways to score points – both with or without explosions. The following is the scoring system:

The object of the game is to get the most points. 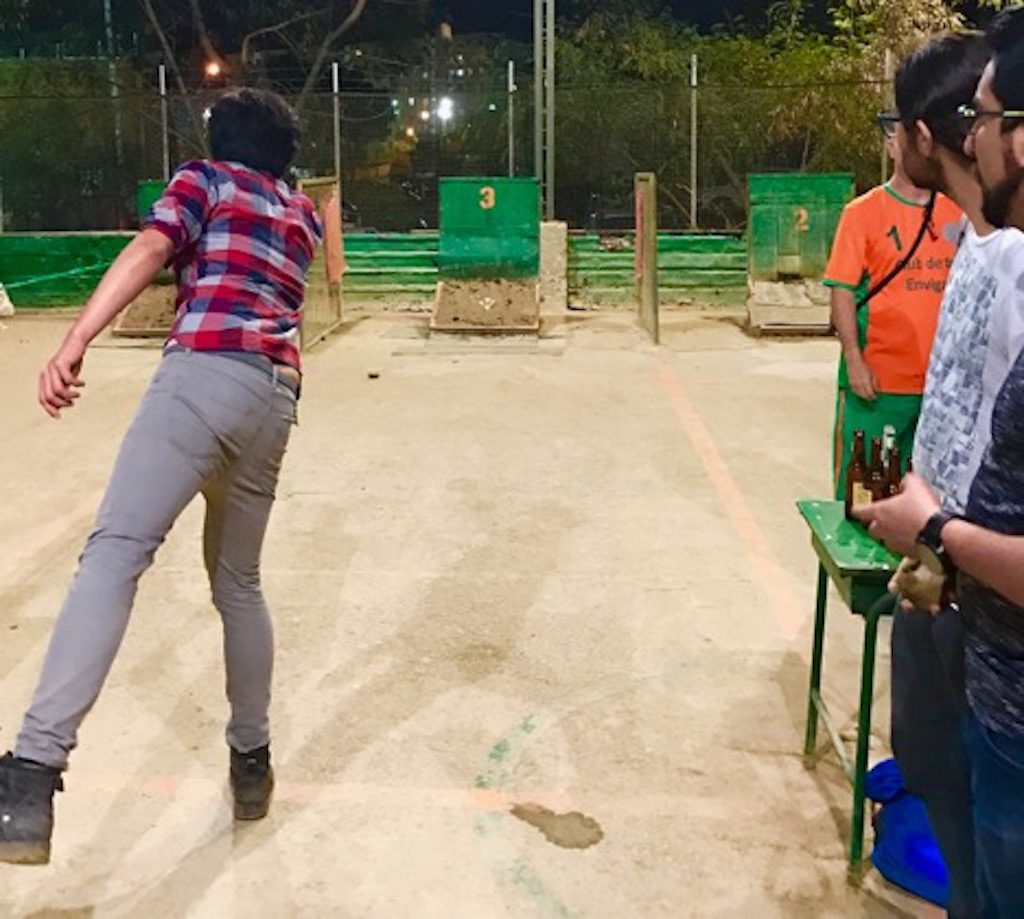 Playing Tejo and eagerly awaiting to see how many points my teammate will earn!

Be Social While Playing!

Playing Tejo is fun, but another added benefit is the social aspect. This is a great way to meet fellow expats or new Colombian amigos while having a few beers or shots of aguardiente!

Renting a board in Envigado costs $1 – $3 an hour but beer is excluded.  You will also need to corral your own group of at least eight people in order to have two teams.

Personally, I enjoyed playing with the group Tejo In Medellín founded by Chris Cajoles.  For 30,000 pesos (about $10 U.S. dollars) Chris sets up tournament style play for two hours which include three beers. It is also highly rated on TripAdvisor.

The bond must have been strong, because many of the people I met while playing have become some of my best friends here in Colombia. 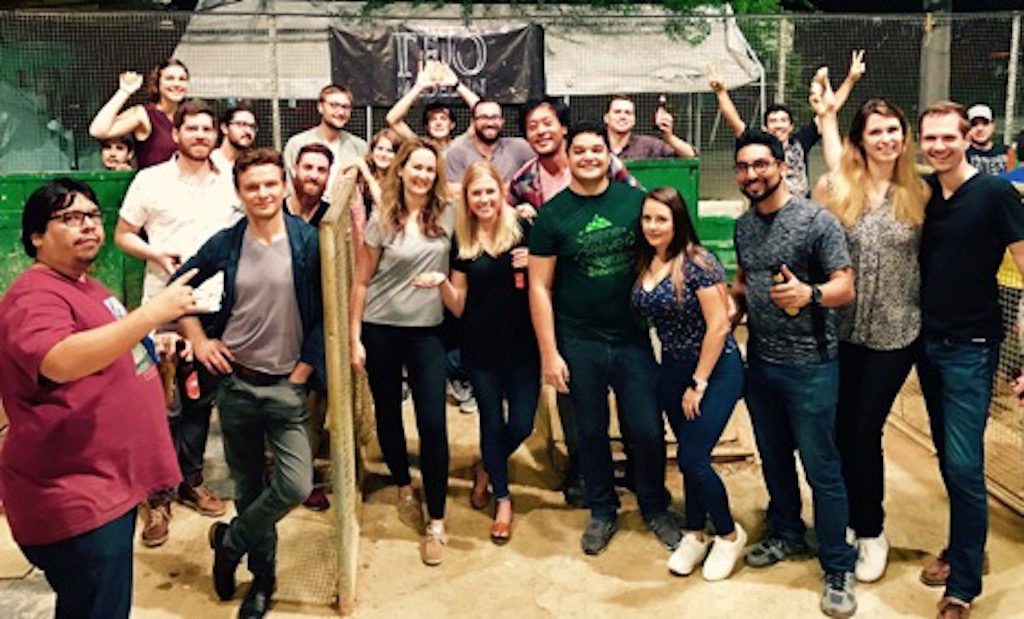 My new group of Tejo amigos!

Now that I’ve hopefully convinced you this game is a must while here in Colombia, I will share four helpful tips to know before you go:

The address of the field I played it is Estadio Polideportivo Sur – Envigado, Carrera 48 #46 Sur 150 Avenida Las Vegas.

This is located about a 15-25 minute taxi ride from El Poblado, depending on traffic. 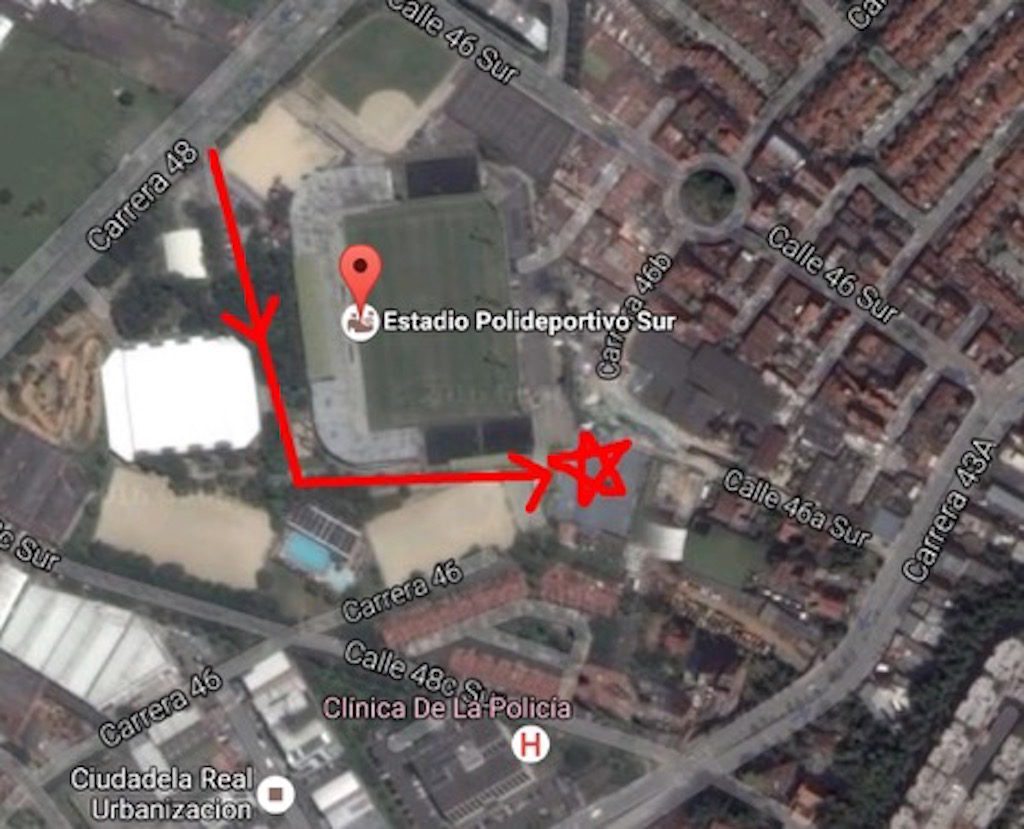 Location of one of the Tejo fields. Map provided by Tejo in Medellín

The Bottom Line: Tejo in Colombia

Tejo is popular in Colombia. Reportedly only soccer enjoys a larger following and more developed industry in Colombia.

One of my favorite travel gurus, Anthony Bourdain, agreed that Tejo was a must attend event!  He also played a game while here in Colombia.

Check out the clip and his skills playing from his TV show Parts Unknown in the video above. Hey, if Tejo is on Anthony Bourdain’s bucket list – it should be on yours too.

Playing a game while you’re in Colombia, specifically Medellín, is a great way to learn a classic traditional game, meet some new friends and have fun with some explosions.  What could be better than some alcohol, explosives, music and friends? 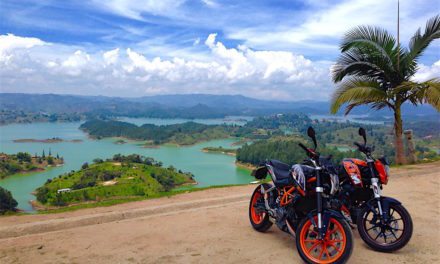 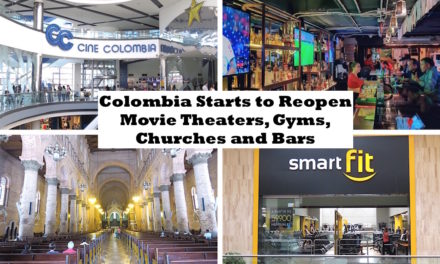 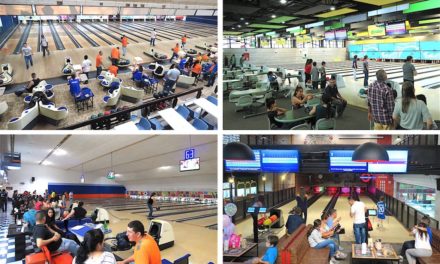